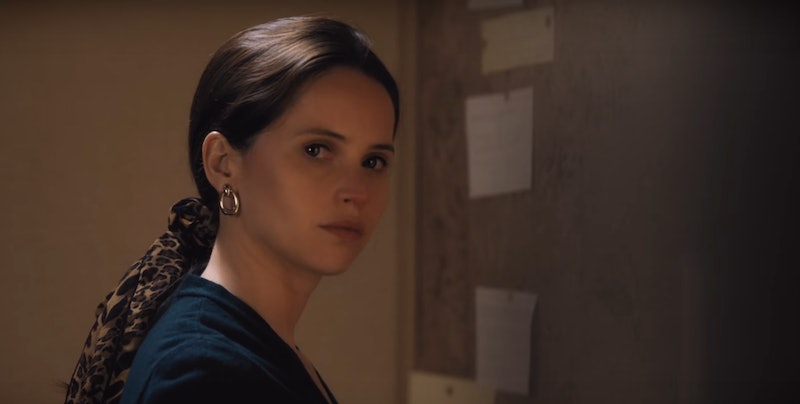 Ruth Bader Ginsburg is a force. The 85-year-old Supreme Court Justice has long fought for women's rights, but what some people don't know is that one of Ginsberg's earliest cases actually sought to prove discrimination against a man. The new On the Basis of Sex trailer puts that very case — Weinberger v. Wiesenfeld — front and center. The case, in which a widower was denied his wife's survivor benefits, is how Ginsberg got her foot in the door with gender inequality, and now it's the basis of a dramatic feature film. Needless to say, the first On the Basis of Sex trailer will leave you feeling so inspired.

The trailer opens with a young RBG (played by Felicity Jones) walking amongst a sea of suited gentlemen. "There are 178 laws that differentiate against the basis of sex," Jones can be heard saying. After Dorothy Kenyon (the renowned political activist played by Kathy Bates) questions Ginsberg's approach to fighting the powers that be, RBG replies, "[protests] are important, but changing the culture means nothing if the law doesn't change." True. That.

Viewers then get a few brief glimpses into Ginsberg's pursuit of becoming a lawyer, a journey upon which she was often met with blatant sexism. "I wasn't what they were looking for," she tells her husband (played by Armie Hammer) when he asks her about an interview she had with a law firm. "They said women are too emotional to be lawyers ... [and] a woman graduating top of her class must be a real ball-buster. I worked hard, I did everything I was supposed to do, and I excelled," Ginsberg laments.

Now, of course, we know that RBG didn't just end up excelling — she changed the world. The trailer for On the Basis of Sex gives us some insight into how she went about changing the system and started a career that would eventually take her all the way to the Supreme Court. As the movie's official synopsis explains:

"[On the Basis of Sex] tells an inspiring and spirited true story that follows young lawyer Ruth Bader Ginsburg as she teams with her husband Marty to bring a groundbreaking case before the U.S. Court of Appeals and overturn a century of gender discrimination. The feature will premiere in 2018 in line with Justice Ginsburg’s 25th anniversary on the Supreme Court."

According to an interview Jones did for the June issue of Elle, getting into Ginsberg-mode required one very special accessory: red lipstick. "I just played Ruth Bader Ginsburg in the 1940s and ’50s," she told the publication, "and using a strong lipstick really helped me find the character. She wore a very dark red, kind of femme fatale shade, and I think for her it was almost a weapon."

The film's script was written by Ginsberg's late husband's nephew, Daniel Stiepleman, Deadline reported, and was originally supposed to have Natalie Portman in the role of RBG. In fact, RBG told Vanity Fair that Portman came to her about the upcoming biopic, and was adamant that it have a female director.

"Natalie Portman came to talk to me about [On the Basis of Sex]," Ginsberg said, "and we had a very good conversation. And one thing, interesting, that she insisted on, it held up the project for awhile. She said, 'I want the director to be a woman. There are not enough women in this industry. There are many talented out there.' And now they do have a woman director [Mimi Leder]."

Despite Portman no longer starring in the film, Leder remained behind the camera. And, while it's unclear why Portman was replaced, the trailer proves that Jones definitely does RBG justice.