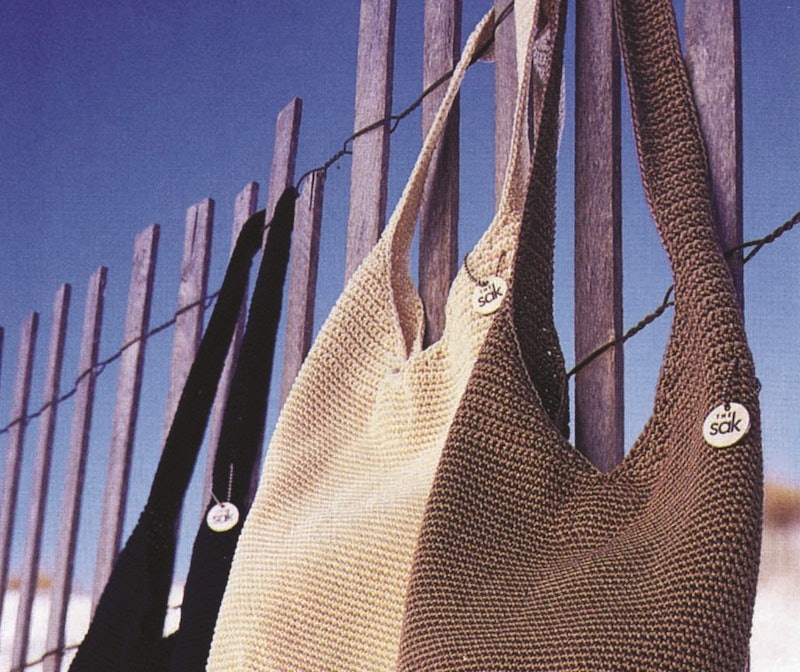 The Sak is celebrating its 30 anniversary by giving back to the community that first created it. The Sak is creating a health care and education fund for women artisans in Bali for its anniversary. Through the fund, 100 percent of the proceeds from its limited-edition capsule collection is going back to the Balinese artisans who first inspired the brand’s “crochet craze” back in 1989.

The Sak was created in 1989 when co-founders and childhood friends Mark Talucci and Todd Elliott quit their mundane corporate jobs and went to travel the world together. When they landed in Indonesia, Talucci and Elliott were blown away by the artistry on the island. Inspired, they began to design bags influenced by the treasures they found while in Bali — one of which was the iconic Sak 120 Hobo.

The Sak 120 Hobo is one of the biggest "it bags" of the '90s. It became a hit in the fashion world when the brand debuted its now-iconic ad in Vogue magazine, with a nude model draping the crochet 120 Hobo bag over her back. The purse was the very definition of boho chic, and fashion lovers raced to include it in their wardrobes to play with the bohemian trend.

Now that The Sak has been three decades in business, the brand is going “Back to Bali” to celebrate its beginnings. The Sak is returning to the same village, Negara, where the journey began for Talucci and Elliott and employing the skilled female workers residing there.

The 30 anniversary capsule will feature 18 new versions of the 120 Hobo bag. Each of the 18 styles will be hand crocheted by a woman artisan in Negara, who will then sign and number her piece. The artisans make the pieces in their own homes, and the brand provides them with the tools and training they need to keep growing in their craft.

As a thank you to the village that inspired Talucci and Elliott, 100 percent of the sales of the new 30 anniversary collection will sponsor the health care and education for both the women artisans of Negara and the surrounding Balinese villages. Up to $100,000 will be donated.

"It is our goal to empower these women with an environment that supports a work-life balance allowing them to continue to expand on their traditional crafts." CEO and Founder Mark Talucci tells Bustle.

Not forgetting the need to be eco-conscious, each of the capsule collection bags also use green materials. The bags are made from sustainable materials like bamboo and cotton.

The bags are handmade in limited quantities, so make sure to mark your calendar if you're interested in getting a crochet purse. The collection will be available to shop on March 18, but some versions are available to shop now on TheSak.com. You can see just how colorful and warm-weather-ready they are. Bring the spirit of Bali to your closet this spring season.