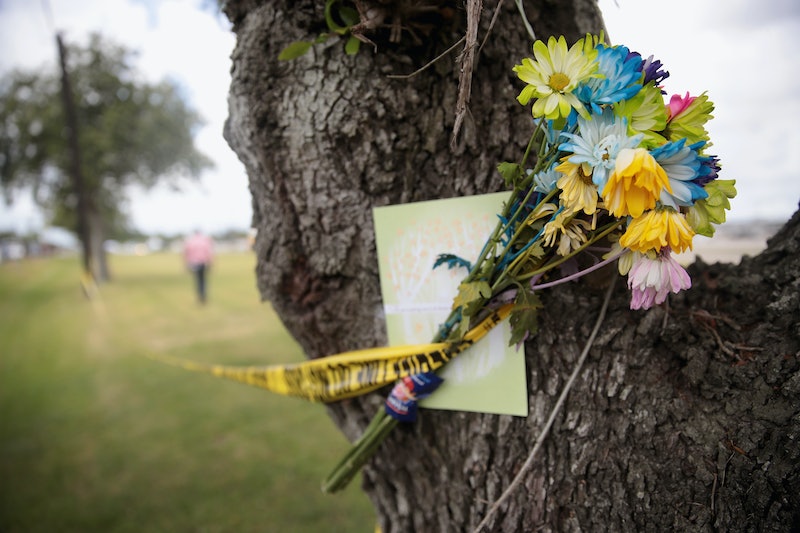 Digging into the motives of a school shooter is a messy business, but it inevitably happens following every school shooting that rocks the country. Explaining a tragic event, somehow, sometimes seems like it makes it easier for people to move past it. While there's still a lot we don't understand about the Santa Fe shooter, there's one thing that's absolutely crystal clear: No matter the reports, the Santa Fe shooting in Texas didn't happen because a girl rejected a boy's advances.

Sadie Rodriguez, the mother of victim Shana Fisher, told the LA Times that her daughter had "had 4 months of problems from this boy," referring to the shooter.

"He kept making advances on her and she repeatedly told him no," Rodriguez told the LA Times. According to her account, the eventual shooter got more and more aggressive toward Fisher, until Fisher finally confronted him in class about it, which Rodriguez said embarrassed him.

"A week later he opens fire on everyone he didn't like," she said, according to the LA Times. "Shana being the first one." (The claim that Fisher was the first person to be shot has not been verified.)

Her words were turned into an explanation for the shooting, which has now turned up in many places. This includes, for example, a Reuters article with the headline "Spurned advances provoked Texas school shooting, victim's mother says" or a USA Today piece titled "Texas school shooting: Gunman targeted my daughter because she rejected him, grieving mom says."

Rodriguez's account is heartbreaking — but also chilling, for any girl and woman who have ever had to repeatedly rebuff a determined suitor. Fisher, most likely, never wanted to publicly humiliate the classmate who would end up taking her life. According to her mother, she was driven to publicly confront him only after four months of increasingly aggressive pursuit.

This falls into a pattern, though, of women becoming murder victims after spurning the advances of men, according to Safe Connections, an organization working to prevent sexual and intimate partner violence. This pattern, besides having been documented in numerous scientific studies, has even been a part of some of civilization's most renowned works of literature.

Insinuating that the shooting happened because of Fisher's actions accomplishes nothing besides pushing girls to be even nicer, even more careful not to wound the fragile egos of boys who might become murderers.

Think of the Greek legend of the Trojan War, which pins the responsibility for a multi-year war between gods and men on the shoulder of a woman, Helen of Troy, who refused to go back to a promised husband after she had chosen someone else. Christopher Marlowe, a playwright and contemporary of Shakespeare, referred to her as "the face that launched a thousand ships" — but it was Menelaus, the man who Helen decided not to marry, who actually launched the ships on their journey that began a deadly war.

There's a fine line between noting that these events preceded the shooting — or the mythical war — and assigning them as a clear cut reason it happened. Even if the Santa Fe shooter decided to carry out this tragic act of violence because Shana Fisher turned him down and embarrassed him, the shooting didn't happen because of Shana Fisher. The shooting happened because of the shooter.

This shooting didn't happen because Fisher spurned a boy. It happened, in part, because of toxic masculinity and the easy availability of deadly weapons. Insinuating that the shooting happened because of Fisher's actions accomplishes nothing besides pushing girls to be even nicer, even more careful not to wound the fragile egos of boys who might become murderers.

Blaming the shooting on a young teen "spurning" the "advances" of an aggressive boy is reminiscent of the "Walk Up, Not Out" slogan that seemed to insinuate that if kids were just nicer, shootings wouldn't happen. It takes the responsibility away from the one who committed the violence, and teaches young people — and especially young girls and women — that it's their duty to be nice to those who make you feel unsafe and their responsibility to make sure they don't get shot and killed at school.

Fisher, according to her mother, did what she needed to do to rid herself of an aggressive pursuer. Her actions were not what resulted in her death, or the deaths of any of her classmates or teachers — that fault lies entirely with the shooter.