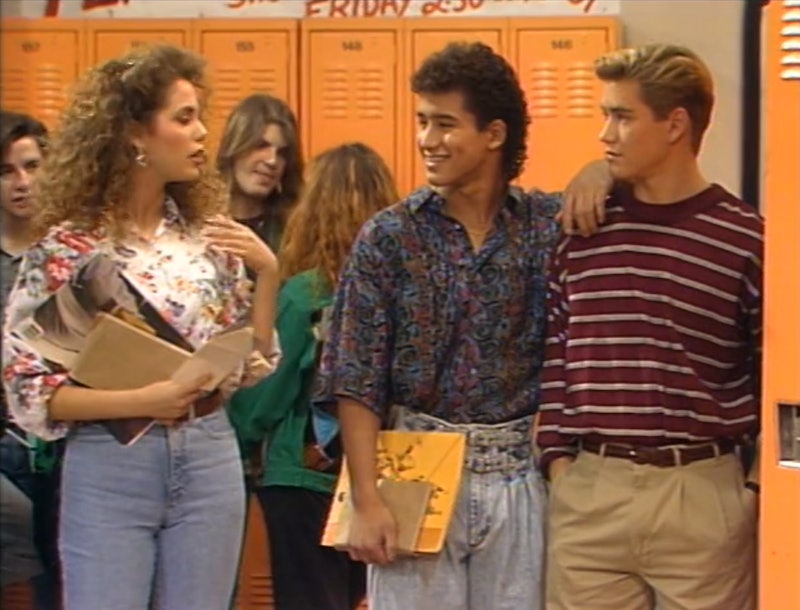 Class is back in session at Bayside High School. On Saturday, April 20, the Saved by the Bell cast reunited to celebrate the sitcom's 30th anniversary, according to People. To commemorate the special anniversary, former co-stars Mario Lopez, Elizabeth Berkley, Tiffani Thiessen, and Mark-Paul Gosselaar met up for dinner, along with several of the star's significant others. The cast members used the landmark anniversary as an opportunity to celebrate over three decades of friendship, and posted pictures of the reunion on social media.

Saved by The Bell won't officially celebrate its official 30th anniversary until August, as per People, but the former cast got a head start on the festivities. On Instagram, Lopez shared a cast group photo, captioning the picture, "Friends forever..." Lopez played A.C. Slater on the series, and the role jump started his career as an actor and entertainer. It looks like Lopez may have treated the whole group to the dinner as in the comments, Gosselaar wrote, "Thanks for taking care of the bill!" with several crying laughing emojis. Lopez also posted a video of the cast at the table on Instagram, captioning it "Credit card roulette comin up! #OldSchool". In the video, he noted that the whole cast had a great time. "Okay fun dinner tonight with some old friends," Lopez said. "We ate an obscene amount of food, the Lopez's are walking home. Credit card roulette is coming up."

Gosselaar played Zack Morris on Saved by the Bell but is also known for his role as Detective John Clark Jr. on NYPD Blue. The actor shared the Save By the Bell reunion photo on Instagram as well, writing, "This is what 30+ years of friendship looks like..." Lopez responded to his post as well, commenting, "Wine bottle cork player."

The iconic sitcom was on NBC from 1989 to 1993. Over the years of filming, these cast members clearly became close, and the dinner wasn't the only recent time these old friends reunited. In January, Gosselaar joined Lopez on Extra, which the star hosts. The Passage actor shared a throwback photo on Instagram along with the picture from set, writing, "Love that we're still together @mariolopez" with a heart eyes emoji. In 2015, Lopez, Berkley, Gosselaar, and Thiessen appeared in a Jimmy Fallon sketch. The bit saw the cast reprise their Saved by the Bell roles, and it made a nod to some of the show's most noteworthy scenes, such as Jessie's "I'm so excited" meltdown moment.

Saved by the Bell cast members didn't reveal if a potential reboot was in the works, but it's possible the reunion dinner was more than a friendly get-together. Given the number of nostalgic reboots in the works — such as a recently greenlit Beverly Hills 90210 remake with the original cast — it would only make sense to bring back the popular sitcom. Fans can hold out hope that given how tight-knit Saved by the Bell's former co-stars seem to be decades later, one of them will be inspired to put the series back on television.