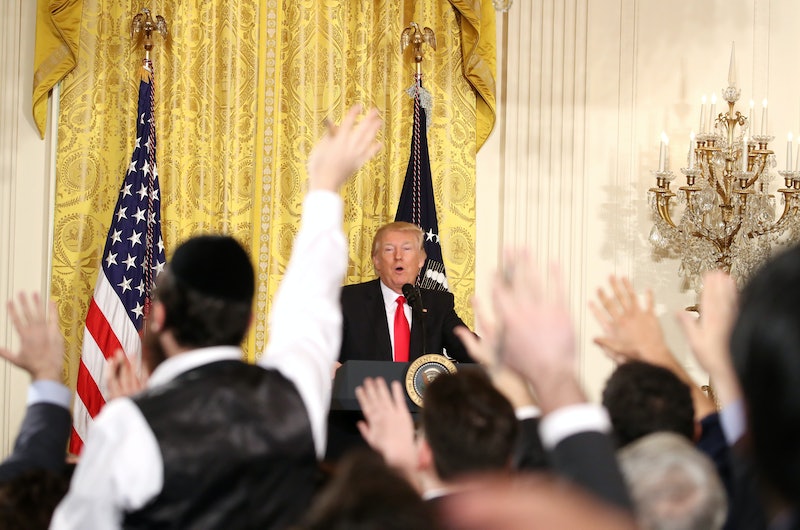 President Donald Trump's solo press conference on Thursday inspired conversation on many controversial topics. But possibly the most disturbing part of Trump's press conference was his treatment of race — and his linking of a black reporter, based solely on her race, to an African American organization.

Trump has, on many occasions, referenced how he is going to help "the African Americans" who live in "inner cities," as he did during the second presidential debate. In public statements, Trump often connects black people, poverty, and the "inner cities." But when you look at the facts, most African Americans don't live below the poverty line, and the majority reside outside of inner cities, the Atlantic reported. This isn't to say that no African Americans live in poverty; 27 percent did, as of Oct. 2016, and when measured against the overall poverty rate, 14.8 percent, this is still a big disparity, according to the Atlantic.

But Trump's first instinct shouldn't be to bring up the inner cities when he mentions black people. And when he sees a black reporter, he shouldn't assume they are "friends" with the members of a historically black organization. It's not an appropriate generalization to make. Except that's exactly what he did.

April Ryan of American Urban Radio Networks, a journalist who happens to be black, asked Trump if he was "going to include the Congressional Black Caucus," which represents black members of Congress, in discussions about urban policy, the Washington Post reported. Trump's response was to interrupt Ryan in the middle of her question to ask her, "Tell you what, do you want to set up the meeting?" He continued to talk over her attempts to tell him that she was a journalist, not a member of the CBC, asking, "Do you want to set up the meeting? Are they friends of yours? Set up a meeting.”

Trump also claimed he was supposed to meet with Rep. Elijah Cummings, a CBC member, but that Cummings "was all excited and then he said, 'Oh I can't move it might be bad for me politically. I can't have that meeting,'" the Washington Post reported. But Cummings later came forth to discount Trump's claim. "I have no idea why President Trump would make up a story about me like he did today," Cummings told NBC News in a statement.

And for its part, the CBC also tweeted out a letter they claimed to have sent Trump on Jan. 19 — that he allegedly never responded to. Ryan herself told MSNBC that after the press conference question, she's been contacted by "many" CBC members. "They are very eager to meet with this president on the issues," Ryan told MSNBC.

To add to this whole race-related mess, shortly before Ryan's question, Trump, apparently without being prompted on the subject, said he was "the least racist person," the Washington Post reported. Maybe instead of proclaiming that he isn't racist, Trump should focus on responding to that letter from the CBC. And you know, not assuming that people know other people just because they're of the same race.