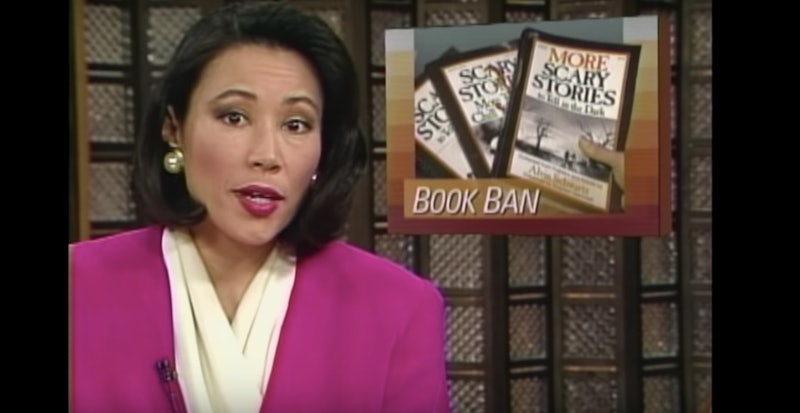 For those who grew up reading Alvin Schwartz’s Scary Stories to Tell in the Dark in the '90s it might be hard to believe they could get any scarier. But the trailer for the documentary Scary Stories proves just how horrifying these short stories really were with help from Schwartz's family and other horror writers like R.L. Stine. This documentary, in theaters April 26, might leave you shaking in your boots, but it'll also help prepare you for Guillermo del Toro's upcoming Scary Stories to Tell in the Dark movie.

Directed by Cody Meirick, Scary Stories takes a closer look at the controversy surrounding Schwartz's 1981 collection of short horror stories that some people believed were too terrifying for kids. And as the documentary show, some even tried to have the books banned in libraries and in schools — sometimes, even succeeding in their mission to keep this modern horror classic out of little kids' hands. Maybe more than sometimes, since the documentary claims Scary Stories To Tell In The Dark is "among the most banned books of modern times." It's something, according to his family, he apparently loved.

Over the course of 40 interviews, though, the documentary makes the case that kids didn't need protecting from these alleged "gruesome" stories. His scary stories weren't actually harming anyone, they were just sparking a little imagination and perhaps teaching kids about the darker side of life. As Stine points out in the trailer, this was part of Schwartz's genius, "he took all these old folk legends and made them readable for kids."

Now, that's what the upcoming live action Scary Stories film, produced by del Toro and directed by André Øvredal, is hoping to do. In an interview with Entertainment Weekly last month, del Toro revealed how they chose the stories in Scary Stories To Tell In The Dark, narrowing it down to five or six classics.

"Those that know the books will see more than people that haven’t read the book," he told EW. "But we basically distilled it to the ones that everybody seems to remember the most. The books obviously have many many more stories, so this could go on and on. But we said, ‘Let’s do greatest hits.’”

And the Scary Stories To Tell In The Dark trailer certainly doesn't disappoint. In fact, it might just force you to relive all your childhood terrors. The movie takes place in the small town of Mill Valley in 1968, where "the shadow of the Bellows family has loomed large."

"It is in their mansion on the edge of town that Sarah, a young girl with horrible secrets, turned her tortured life into a series of scary stories, written in a book that has transcended time—stories that have a way of becoming all too real for a group of teenagers who discover Sarah’s terrifying home."

And also this book. But as Stella (Zoe Margaret Colletti), the finder of this book, soon learns, "You don't read the book, the book reads you." Spooky, right?

Whether you're a longtime fan or new to Schwartz's work, the Scary Stories documentary, available on VOD May 7 and DVD on July 16, can be seen as a companion piece to the upcoming movie. Even better, thanks to del Toro and this new documentary, it's clear Schwartz's scary stories will continue to scare fans for years to come.

More like this
What’s New On Netflix: Lana Condor’s Ghostly Comedy & A Sexy Reality Series
By Arya Roshanian
'Dune: Part Two' Could Include A 'Little Women' Reunion
By Arya Roshanian and Alyssa Lapid
Kimberly J. Brown & Daniel Kountz Looked Back On Their ‘Halloweentown’ Romance
By Stephanie Topacio Long
All The Sneaky Lindsay Lohan Movie Easter Eggs In Her New Ad, Explained
By Stephanie Topacio Long
Get Even More From Bustle — Sign Up For The Newsletter