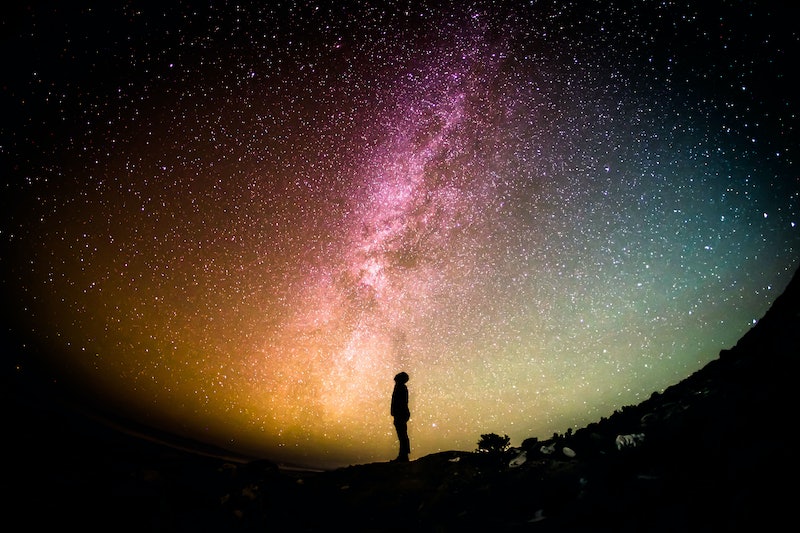 Some coincidences feel like fate. When you meet a stranger who inexplicably shares your birthday or somehow run into an acquaintance while you’re both far away from home, you’re often left asking, “What are the odds?” Well, according to math, the odds are generally pretty good. The science behind coincidences shows that these seemingly impossible occurrences are often more mathematical than magical.

In a recent episode of NPR’s Hidden Brain podcast, host Shankar Vedantam delves into the apparent "magic" of coincidence. He spoke with Joseph Mazur, a mathematician and author of Fluke: The Math and Myth of Coincidence, to give some statistical context for coincidence. Mazur attributes some of the magic to a general misconception about the number of people we each believe we know. "People think that their address book is essentially the people they know, and it turns out any address book is about one percent of the people they know in some way," Mazur said.

When you consider all the people who’ve crossed your path over the course of your life in both small and significant ways, it seems a little more likely you might run into them again at some point. Mazur says that even this type of coincidence is fairly common, estimating that about 80 percent of all the coincidences he’s heard fall under the category of seeing someone familiar in an unexpected place. While maybe not magical, there is something certainly comforting in idea that we’re connected to more people that we think.

I, like most humans, enjoy a good story about coincidence. One of my favorites is this one about a couple whose paths crossed years before they met. While looking through old family photos for their wedding video, Donna Voutsinas came across a picture of her 5-year-old self and her siblings posing at Disney World only to realize that Alex Voutsinas, her husband-to-be, and his father were also in the background of the picture, walking by the exact moment the photo was taken. Bananas, right? Well, it became a little less so when I learned an almost identical incident (seeing a spouse-to-be in the background of a old home video while at a theme park) has also happened to at least one other couple.

An article in The Atlantic looked at aforementioned birthday conundrum — that is, finding out you and a stranger were born on the same day. If you’re wondering, “How many people need to be in a room before there’s a 50/50 chance that two of them will share the same birthday?”, the answer is 23. However, it doesn’t answer to the question, “Do statisticians have to math the magic out of everything?”

In addition to our brain being programmed to find patterns, math is kind of everywhere. There are endless examples of math in nature that show patterns pop up at every scientific scale. While not supernatural in the science-can’t-explain-it sense, I’d argue there’s something miraculous about the patterned way the world works.

In the Hidden Brain episode, Vedantam also interviews Nick Epley, professor of behavioral science and author of Mindwise: How We Understand What Others Think, Believe, Feel, and Want. Epley says seeing coincidences is simply a facet of being human, stating, “This general tendency to explain behaviors in terms of purpose or intent or meaning is often quite a successful thing to do.” Given that we, human beings, exist with other human beings who function with intentionality and goals, it’s often helpful and even necessary to find these types of patterns. Epley believes it’s “a good way to learn about other people.”

So, can you derive meaning from running into your crush from second grade at the supermarket? I mean, not in an ~*it’s fate*~ kind of way. But maybe it can be a nice, little reminder that the world is slightly smaller than you thought and the chances of finding a familiar face wherever you go is pretty good. There is something certainly magical about that.