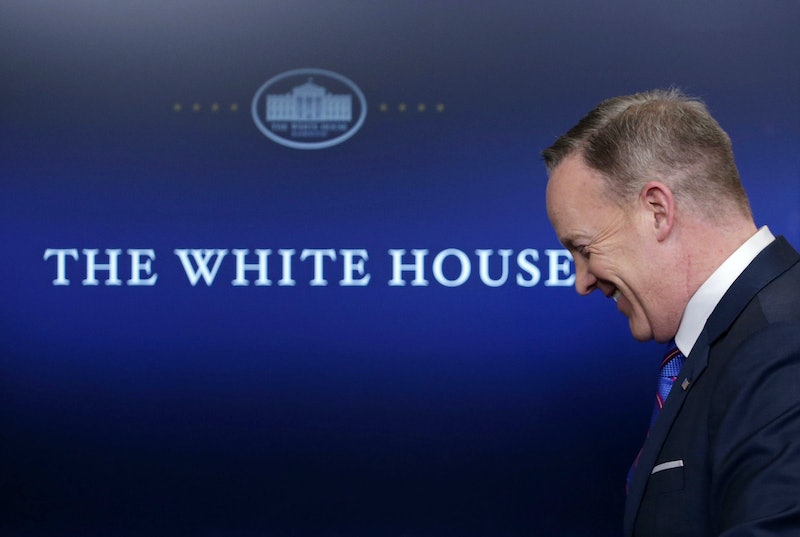 You've got to admit, regardless of your political views, White House Press Secretary Sean Spicer has a pretty tough job. In less than a month of his boss officially being president, he has had to defend the administration against not only controversial policies but being caught in several mistruths and misstatements. Now, the pressure just might be showing. The Sean Spicer ABCs video is a cringeworthy classic. Could you blame him?

Granted, Spicer got off on the wrong foot with the White House press corps, with his insistence that the inauguration really had been the biggest ever despite all reliable evidence pointing to the contrary. Let's not forget his now infamous password tweet, which was pretty rich given everything Trump said on the campaign about, you know, emails and the like.

Still, there's room for sympathy. According to Politico, Trump did not enjoy the Saturday Night Live sketch with Melissa McCarthy flawlessly parodying Spicer — although Spicer, for his part, has handled the situation quite well.

But now on top of all of this, the good folks over at GQ have noticed that Spicer sometimes has a bit of trouble with, well, speaking. Words, which is ironic considering, you know, how his boss has bragged he has the best words. In fact, GQ has actually made an alphabet of Spicer flubbing his words.

To be fair, if you've ever gotten up and spoken in front of people, chances are that this has happened to you, too. It's happened to me more times than I can count, and public speaking certainly isn't something that I have to do on a daily basis. So, I almost have to feel the slightest twinge of sympathy for the guy after watching this video.

But then I remember he's standing up for an administration that's spent its first couple of weeks wreaking havoc across the board, and he's doing it by peddling untruths and shutting out the press. He mischaracterized the travel ban and the Michael Flynn scandal. With all of this, there's no reason that the public should trust anything that he says — the boy who cried wolf, and all that.

On a more serious note, when I watch the ABC video, I wonder if maybe the moments that Spicer misspeaks are moments when the truth is fighting to come out. Maybe he's uncomfortable with all of the pressure that the job is undoubtedly bringing.