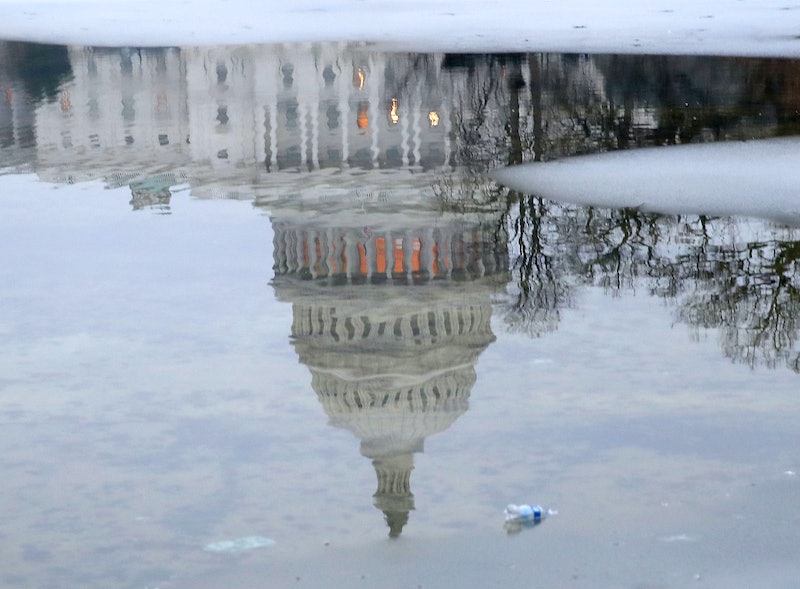 According to CNN, some federal employees have begun coming up with creative strategies to maintain morale, now that many of them haven't been paid in over a month. In particular, Secret Service agents' government shutdown "challenge" coins are being distributed to add some levity to the situation. The coins have no monetary value, but the concept behind the memorabilia has been around for decades. Bustle has reached out to the Secret Service for comment.

According to Northwest Territorial Mint, challenge coins have a special place in United States history: They've been used by the military, police force, fire fighters, and more, and they're used to symbolize a community within a certain group. NWT Mint further reports that challenge coins can be traced as far back in American history as World War I and the Civil War, when soldiers would leave for battle with a coin in their pocket to commemorate their efforts.

CNN host Jake Tapper first tweeted the photos of the coins. He wrote, "Photos of special challenge coins being distributed among Secret Service personnel and their families, expressing frustration at the requirement they work without pay because of the government shutdown."

Secret Service members are among those federal workers who are working without receiving pay during the partial shutdown. Though President Trump did sign a bill earlier in the month guaranteeing that furloughed employees would receive backpay once the government reopens, that doesn't do much to help those employees during the shutdown itself.

Last week, several Secret Service agents spoke to CNN anonymously about their decreasing morale. One agent said, "There are a lot of people that are having financial hardships for [the shutdown], and people are kind of bracing for impact."

CNN further reports that of the approximate 7,222 people who are employed by the Secret Service, almost 6,000 of them are currently working without pay, and the remaining 1,200 are furloughed.

In a statement to CNN, White House Press Secretary Sarah Huckabee Sanders said, "We have the deepest respect for the brave men and women of the United States Secret Service and couldn't be more grateful for the work they do every single day."

In a letter to Nancy Pelosi, POTUS assured her that the Secret Service has confirmed its ability and willingness to do so. As of now, it's unclear if the SOTU will in fact take place on Jan. 29. But if it does, that will be more money owed to the Secret Service members who work it.