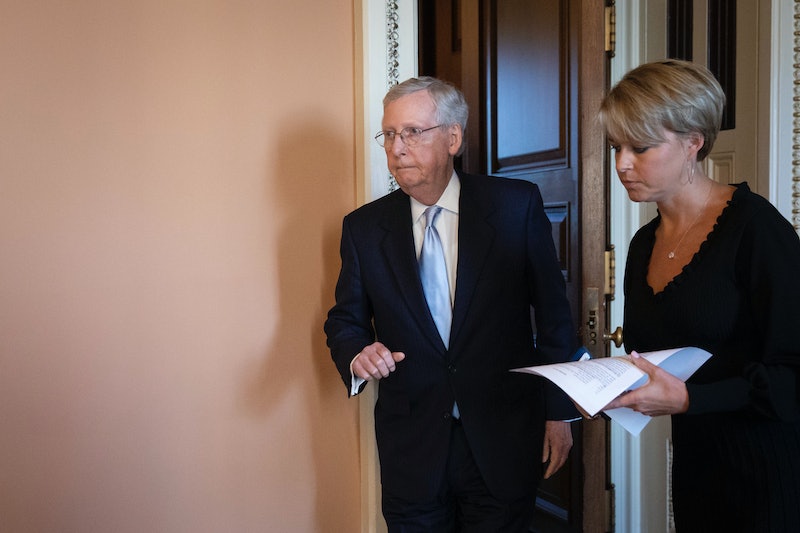 The FBI investigation into the sexual misconduct claims against Brett Kavanaugh, who has denied all allegations, was only announced on Friday. Now, Senate Majority Leader Mitch McConnell, who is eager to see Trump's Supreme Court justice pick confirmed, has said that the Senate will hold a vote on Kavanaugh as soon as this week, according to The Hill.

In a fervent speech to fellow senators, McConnell said Democrats were using "character assassination" to bring down Kavanaugh, according to NBC News.

"In my judgment the pattern of behavior we've seen … confirms what Democrats have told us," McConnell said during his floor speech to the Senate on Monday. "They are committed to delaying and obstructing and resisting this nomination with everything they’ve got."

The FBI's investigation into Kavanaugh and the claims made by Dr. Christine Blasey Ford and Deborah Ramirez has been limited to a one-week deadline, set to wrap up by Friday. "The time for endless delay and obstruction has come to a close," McConnell said, according to The Hill. "Judge Kavanaugh's nomination is out of committee. We're considering it here on the floor and ... we'll be voting this week."

Though McConnell has announced that the vote will be this week, Republican senators have not given an exact schedule on Kavanaugh's nomination timeline, The Hill noted.

McConnell is pushing ahead with Kavanaugh's confirmation vote even as the nominee falls short of the majority Senate votes needed for him to become the next Supreme Court justice, according to The Hill. Two GOP senators, Susan Collins of Maine and Lisa Murkowski of Alaska, are still on the fence about whether to confirm Kavanaugh, as of Monday. Another GOP senator, Jeff Flake, has voiced his support for Kavanaugh, barring anything alarming from the FBI's limited investigation into the allegations, while three Democrats, vulnerable ahead of the midterm elections, are also unclear on their votes, according to The New York Post.

Republicans currently hold a 51-49 majority in the Senate. If the vote results in an even 50-50 split, Vice President Mike Pence would be the tiebreaker and green light Kavanaugh to the nation's highest court.

Last Thursday's ardent Senate hearing on Kavanaugh and one of his accusers riveted the nation. Ford testified in front of the Senate Judiciary Committee and detailed her claim that Kavanaugh had sexually assaulted her at a 1982 high school party. Kavanaugh, during his subsequent appearance, gave a resounding denial and counter-testimony. One day after the testimonies, an FBI investigation was authorized.

According to The Independent, the constraints of the FBI investigation mean officials will not be interviewing Ford, an issue that Democrats have denounced. The FBI will conduct at least four interviews though, including one with Mark Judge, the high school student who Ford said was also in the room when Kavanaugh allegedly assaulted her.

McConnell's floor speech criticizing the Democrats and announcing the vote's time frame came on the same day that President Trump defended Kavanaugh, NBC News reported. Trump also vilified Senate Democrats for treating Kavanaugh "so viciously and violently" but said he is "open" to changing his mind on his pick if the FBI investigation this week reveals new information.