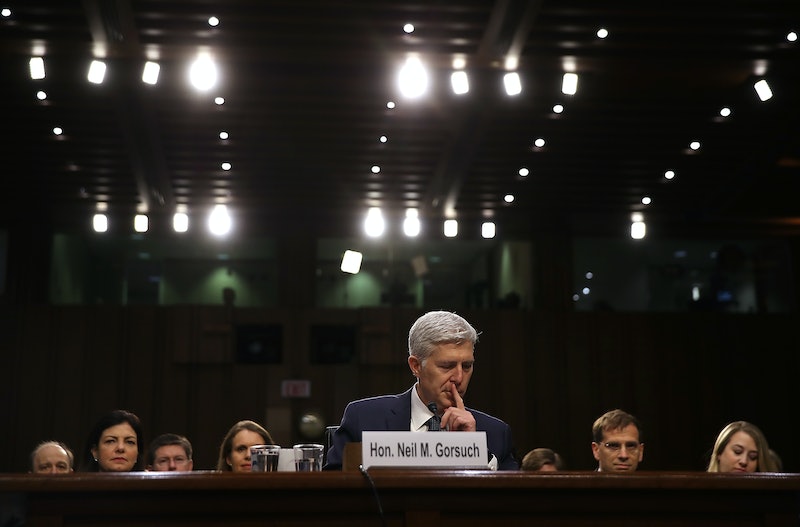 Senate Republicans opted to deploy the so-called nuclear option in a 48-52 vote Thursday, bypassing Democrats' filibuster of Supreme Court nominee Neil Gorsuch by changing procedural rules. In voting to "go nuclear," Senate Republicans have altered longstanding Senate rules to enable the confirmation of presidential nominees for the Supreme Court with a simple 51-majority vote. Previously, Supreme Court nominees could be confirmed only after reaching a 60-vote threshold.

Speaking from the Senate floor on Thursday, McConnell claimed that while it was Senate Republicans moving to invoke the nuclear option, it was Democrats who had triggered it. "Let me say this to my Democratic colleagues: If you truly cannot support the nomination of this eminently qualified nominee, then at least allow the bipartisan majority of the Senate that supports Gorsuch to take an up-or-down vote," Sen. McConnell said, according to ABC. "You already deployed the nuclear option in 2013. Don't trigger it again in 2017."

Senate Democrats used the so-called nuclear option in 2013 to change procedural rules surrounding the confirmation process of a president's nominees for executive branch and lower-court positions to a simple majority vote. However, the confirmation of Supreme Court nominees were not included in that rule change, according to the Washington Post.

Senate Minority Leader Chuck Schumer attempted to delay the Senate from moving ahead with a vote on the nuclear option by raising a motion to adjourn the Senate with no success. Senate Democrats said they feared changing longstanding procedural rules would impact much more than Gorsuch's Supreme Court nomination as a simple majority vote could pave the way for more extreme justices. "The consequences for the Senate and for the future of the Supreme Court will be far-reaching," Schumer said prior to the vote Thursday, as reported by the Post. "The cooling saucer of the Senate will get considerably hotter."

Following the rule change, the Senate voted 55-45 to end debate on Gorsuch's nomination with Democratic Sens. Joe Donnelly, Heidi Heitkamp, and Joe Manchin voting "yes" with Senate Republicans. The Senate is expected to hold a final confirmation vote on Gorsuch on Friday.