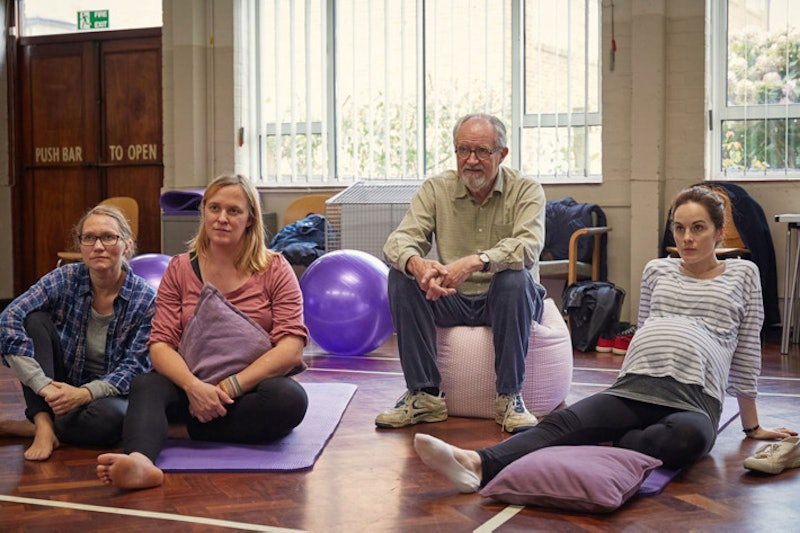 It might seem strange to be glad a female character in a film isn’t fleshed out with a full backstory. After all, it happens far too often that women in film are unnecessarily one dimensional. But in The Sense of an Ending, Michelle Dockery’s character, Susie, isn’t very developed at all, yet it works and makes a great point in the process. Susie, is subtly impactful — not just to the story taking place, but in a way that extends beyond the screen. The character is pregnant at the beginning of the film and has welcomed a child by the end, and she does it on her own, completely without a partner. While that's not technically what The Sense of an Ending is about (it's about a 60-something-year-old man reflecting on his past and realizing that his memories of certain situations aren't necessarily accurate) Dockery's small role as the protagonist's daughter is actually why her character's solo motherhood is so refreshing. After all, a woman having a child on her own sounds more like the primary storyline of a film, made to stand out for being "different"; not a background detail, accepted completely as something that's a part of the fabric of families everywhere.

The fact that Susie simply appears in the film as she is means a great deal to Dockery, too.

"The great thing about her is that there’s sort of a mystery as to why she is coming to have a baby on her own. And it’s very different from the book because Susie, in the book, is married with two children, so it’s really quite new in this script and the character," she says via phone, days before the film's release. "It’s something that I really liked about the film is that you don’t necessarily have to know everything about a character and why they come to be who they are and where they are at this point in their life."

It's true that we don't find out much about the other characters' statuses beyond their relationship to the mystery at hand. We don't know why exactly main character Tony and his ex-wife, Margaret, divorced; we also don't know the extent of some of Tony's relationships from his college days. But Susie's situation, in particular, stands out because it's almost unheard of to encounter a female character expecting a child alone without the fact that she's doing so being a focus or a message. At first I found the lack of background about Susie a bit jarring and felt the need to find answers, but as the movie went on I began to appreciate it. It doesn't matter why she is having a baby alone; the fact that a single parent is allowed to exist in a film without the situation being made into a big deal full of prodding questions likely does matter to other mothers who had children on their own.

For her part, Dockery is committed to keeping the mystery around Susie's character going. "I had an idea [of her background] for myself, but I kind of like to keep it that way," she says. "It’s up to the audience to come to their own conclusions as to why she is doing what she’s doing."

While I appreciate the realism of Susie's single motherhood, that story is just part of the very realistic story that the film depicts. The Good Behavior star explains that director Ritesh Batra was "adamant about making things feel as real as possible" across the board. For example, during the scene where Susie actually welcomes her child, they filmed with a real midwife. The scenes between Dockery's character and her parents, played by Jim Broadbent and Harriet Walter were also very true to life.

"He sort of reminds me a little bit of my dad, actually," she says of her on-screen father. "What you see in the film is very true of relationships, particularly with parents, in that you don’t really need to say a lot, because you’re so close ... There’s this kind of unspoken communication, which I think really comes across in the film; none of it's forced."

As Dockery puts it, The Sense of an Ending is about being "the author of your own story," when it comes to how your memories can "rearrange and adjust" over time. That idea is haunting and sticks with you, but the little we know of Susie's life does, too. The inclusion of Susie's solo pregnancy normalizes a situation that is already pretty, well, normal, and proves that putting diverse realities on film can be done in a subtle, no frills, and very real way.