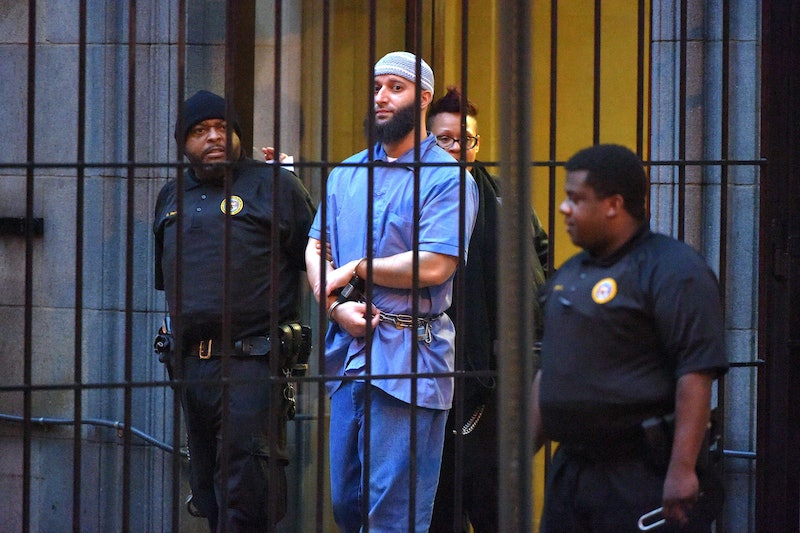 Nearly three-and-a-half years after Serial 's conclusion, followers of the popular 2014 podcast's first season still have questions. With the case far from closed in the court of public opinion, the Serial case will be re-examined in a new HBO true crime docuseries, Variety reported on Wednesday, May 16.

Picking up where Serial left off, the four-part, four-hour series titled The Case Against Adnan Syed will offer a cinematic look at the life and 1999 murder of Hae Min Lee and conviction of Adnan Syed, from the genesis of their high school relationship to the original police investigation and trial," according to the network's synopsis per Variety. The Case Against Adnan Syed will also air on the Sky Atlantic channel in the UK.

Syed is currently serving a life sentence in prison after being convicted of Lee's murder in 2000, as reported by the Baltimore Sun. At age 19, Syed told the newspaper after his conviction in 2000, "I have maintained my innocence from the beginning."

The HBO docuseries about the case will be directed by Oscar nominee Amy Berg and it promises "new discoveries" and "groundbreaking revelations that challenge the state’s case," according to Variety. While premiere date has not yet been announced, the official synopsis goes on to say, "With exclusive access to Adnan Syed, his family, and his lawyers, Berg has been closely following their efforts to obtain justice, with the outcome still to be determined—and possibly shaped by the investigation pursued within the series itself."

According to IndieWire, Berg reportedly began production on the new series back in 2015, following the success of the podcast Serial, which followed the Syed case. The 12-episode weekly podcast, an offshoot of This American Life, became the fastest podcast ever to reach 5 million downloads, was the "first of its kind" to receive a Peabody Award in 2015, and even landed its co-creator, former Baltimore Sun reporter Sarah Koenig (pictured below) on 2014's list of Time Magazine's 100 most influential people.

Much like Serial did, Variety reported that The Case Against Adnan Syed will re-examine the events leading up to Lee's murder, the original police investigation, and Syed's present-day wait for a new trial in Baltimore in 2018.

In June 2016, Baltimore Circuit Court Judge Martin P. Welch vacated Syed’s conviction and granted him a new trial after new evidence challenged the cell tower data that originally linked him to the park where Lee's body was found. Asia McClain, an alibi witness, finally got a chance to share her story, too, according to the Los Angeles Times.

The State of Maryland appealed the ruling for the new trial, but in March, the Court of Special Appeals upheld the ruling, and Syed was granted a new trial. Still, the possibility of a new trial for Syed — who maintained his innocence via Serial — continues to hang in the balance, with Maryland Attorney General Brian Frosh's office just this week asking the Maryland Court of Appeals to reverse the ruling that overturned his conviction, according to The Baltimore Sun.

“The record in this case is replete with evidence of defense counsel developing, investigating, and presenting at trial a battery of defense, including an alibi defense that a seasoned attorney could reasonably have concluded would not have been aided — and more likely would have been compromised — by the proposed narrative of a single added witness,” read the petition, according to the newspaper.

HBO's upcoming documentary series about Syed will have a lot of recent updates on Syed's case — and perhaps follow the outcome, whatever that may be.