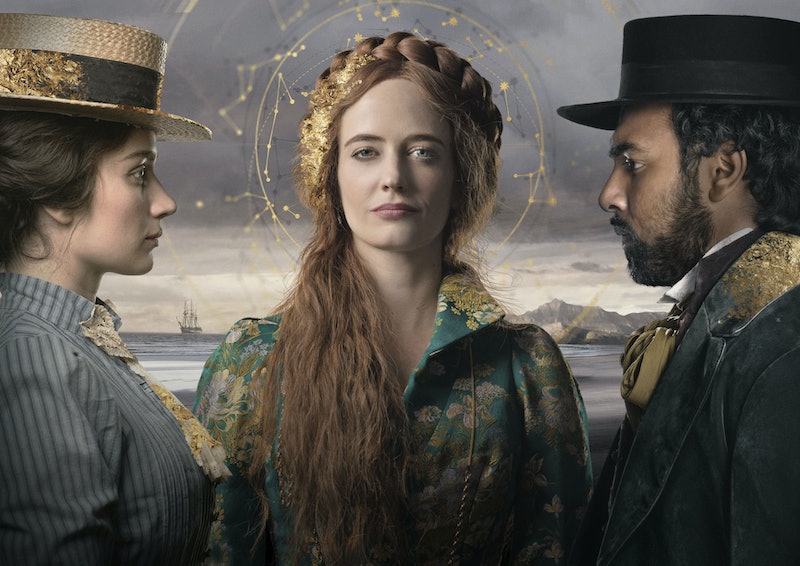 Book-to-TV adaptations have been coming in thick and fast over the past few years, and it won't be long before The Luminaries makes its television debut on BBC One. Based on Eleanor Catton's Man Booker prize-winning novel and screenplay of the same name, fans will soon see actors Eve Hewson, Eva Green, and Himesh Patel take on the "epic adventure mystery" set in the 1800s. In the run up to its release, BBC One has shared a first look image from The Luminaries

Set on the wild West coast of New Zealand’s South Island at the height of the 1860s gold rush, The Luminaries is billed as an 'intricately woven, suspenseful tale of love, murder, magic, and revenge." BBC One have not yet given an official release date for the six-part series but tease it is "coming soon". Until then, the artwork has provided some hope that it will successfully bring the magic from the page to screen.

"The constellations are crucial to the structure and the characters of the original story,..." says RadioTimes on the artwork's significant details. As the BBC writes, "the two star-crossed lovers Anna and Emery are ‘astral twins’ born at the very same instant, and under the very same sky, which means that they share a single destiny."

But of course, not even a romance that deeply connected can go smoothly.

Viewers will see Anna Wetherell travel to New Zealand where she meets her astral twin Emery on the last day of her voyage. But the scheming fortune-teller Lydia Wells (Eva Green) has other ideas for Anna, and lays a trap to ensure that the planned rendezvous between the young lovers never takes place.

"Deceived, swindled, and betrayed, Anna’s fortunes begin to fall. She is drawn into an elaborate plot of blackmail, involving opium, gold, shipwreck, fraud, and false identity, which ultimately finds her framed for murder and fighting for her life," writes BBC One.

"When Emery vanishes without a trace, leaving Anna without an alibi for a murder she did not commit, the noose of the plot begins to tighten around her. Faced with the impossible, she must ask: do we make our fortunes, or does fortune make us?"

Directed by Claire McCarthy, The Luminaries was originally pitched for BBC Two, "yet has now been moved to BBC One where it will likely attract a wider audience," says Radio Times.

The Luminaries is coming soon to BBC One