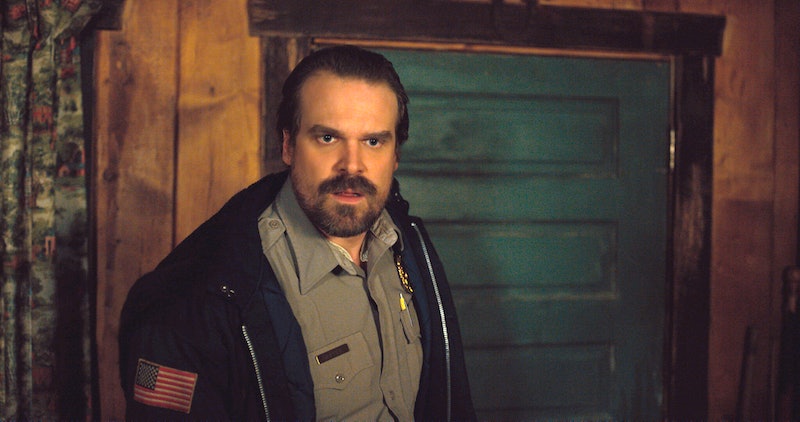 It's beginning to look a lot like Christmas, and so is David Harbour. The actor who plays Sheriff Hopper on Stranger Things debuted a Christmas sweater on Instagram that is taking the internet by storm. In fact, Harbour's Christmas sweater is a meme that will bring you comfort and joy all season long. The actor wasn't trying to become a meme, though. He was just celebrating his Golden Globes nomination for Best Supporting Actor In A Series, Miniseries, or Television Film. He also happened to be doing it in a very fitting December get-up. "I tip my hat to you @goldenglobes for the nomination," Harbour wrote alongside a photo where he is very literally tipping his onscreen sheriff's hat. "My Christmas present came early this year. You got me feeling all the holiday feels."

He managed to also give Stranger Things fans all the feels with the photo, which showed him wearing what might be one of the ugliest holiday cardigans ever over his Sheriff Hopper uniform. The lewk was enough to inspire a delightful mix of Hopper memes on Reddit and Twitter that will help you close out 2017. In style, of course.

Don't believe me? Just check out the Photoshopping skills of Reddit user FatStephen, who added Harbour in the famous photo of President Richard Nixon and Elvis Presley shaking hands in the Oval Office. His sweater somehow makes Elvis' cape and belt look totally normal for a presidential meeting.

Besides knowing good sweaters when he sees them, Harbour also knows when that Hotline Bling, which really only means one thing: he's sharing a meme with Drake. The actor might be giving Drizzy, the most meme-able celebrity in history, a run for his money, though. This is the second time this year that he has become an internet sensation, after Hopper's Season 2 dance moves gave people something to meme about.

And Reddit user davepollotart combined Harbour's dancing and his sweater for a Michael Jackson meme that had other users asking, "Hopper are you OK? Are you OK Hopper?" That joke is both smooth and criminal.

For Twitter user @ST_Posts, though, Harbour was the star at the top of the tree. Better known as the "Christmas Hopper," which had fans asking if this sweater could make an appearance in Season 3. Seriously, can it?

It's true that sweater is also perfect for doing a little crooning in front of a tree, which is why Redditor cvuyawn created an album cover for The Christmas Triple Decker Eggo Extravaganza. It's sure to be Eleven's favorite album of the year.

But his sweater may actually inspire your new favorite holiday greeting, according to @mp_angi on Twitter. When someone says, "Merry Christmas," it's now customary to respond "Hoppy Christmas." Since basically everyone has seen Stranger Things, I'm sure they'll get it.

It's also why Harbour's sweater makes for the ultimate Facebook cover photo. Why lead with a photo of yourself or your cat when the first thing people see when they go to Facebook could be David Harbour in this ruby red Christmas sweater? The choice is simple people, it's Harbour always and forever, as user @ReedPharren pointed out.

After all, Harbour's look is so in Vogue right now. Quite literally, since Redditor jnoble50 put Harbour and his sweater on the cover of a Stranger Things-themed issue that includes "Will Byers' Guide To A Stress Free Holiday" and Demodogs, which are "today's sexier demogorgon."

Twitter user @pot8towave might disagree. They wrote on Twitter that the photo is "everybody's Christmas present," which means he just made your holiday shopping so much easier.

The perfect gift for diehard Stranger Things fans may just be Reddit user DrWankalo's new poster for the Netflix series, which replaces the old Hopper with a sweater-wearing Harbour. The show's new name is "Photoshop Things" and it's just one of a few of our favorite things about the show.

The other is probably Harbour's rivalry with Joe Keery, aka Steve Harrington. Click on Harbour's Instagram photo, and you'll notice he tagged Keery in the photo, which can only mean he's looking for a battle of the holiday sweaters. I don't even think Stranger Things fans could handle that, but it's just another reminder that this really is the most wonderful time of the year.