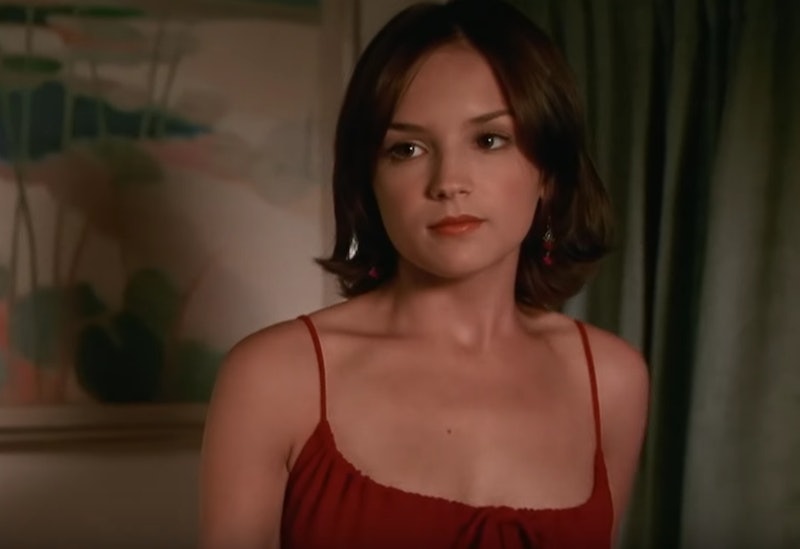 If She's All That had an impact on your prepubescent self when it came out exactly 20 years ago, then you're in good company. The movie that's now celebrating its big, two decade anniversary is still remembered for its dazzling cast that included Rachael Leigh Cook, Freddie Prinze Jr., Gabrielle Union, and Usher, as well as its mastery of the rom-com trope of taking off a woman's glasses and suddenly realizing that she's beautiful. But, looking back now, it's easy to see that the She's All That makeover scene was actually way less glamorous than we thought back then. In fact, Cook recently revealed that she remembers the scene in which Laney had her quintessential moment of walking down the stairs in slow motion to show off her new look as being remarkably uncomfortable.

In an interview with Entertainment Tonight, Cook said, "I remember feeling really self-conscious in the scene where I have to come down the stairs in the red dress." The dress, of course, symbolized Laney's move from painfully nerdy girl to hot popular girl — all for Prinze Jr.'s popular-guy character, Zack Siler. Cook explained that that red dress she wore in the infamous stair scene didn't just feel like a stretch for the nerdy shy character, but actually for Cook herself, who recalled the dress being one size too small.

"There were two of that dress. We needed a stunt double dress for the scene where I had to run out and fall down in the driveway,” Cook explained. And so, the actor had to wear the second, smaller dress. "One dress felt a good size smaller than the other one. Apparently the [main dress] was not available, so I’m in the second dress just going like [holds breath] to get down the stairs," the actor said. "Just without breathing. Say some words and then we’ll be done!" Yikes, that BTS information kind of makes the whole scene, which already had its problems due to its heavy reliance on the male gaze, a lot less romantic — even with Sixpence None the Richer's "Kiss Me" playing softly in the background.

Even with the too-tight dress, Cook said she looks back at filming She's All That as a positive and memorable time in her life. Cook, who told ET that she recently skipped her 20-year high school reunion, explained, "It's immortalized, but also I had all of those sort of classic high school moments." It was, in many ways, her most impactful high school experience. "I got to go to a fake prom, I got to maybe be fake prom queen, like a lot of stuff happened in three and a half weeks in 1999," she added. "No offense to Minneapolis South High School, but I think [the She's All That anniversary] means slightly more to me just because this continued to be such a huge part of my life."

While Cook didn't mention anything about how well the dress she wore for the prom scene fit while talking to Entertainment Tonight, one can hope that it fit better than that inappropriately tight red dress.