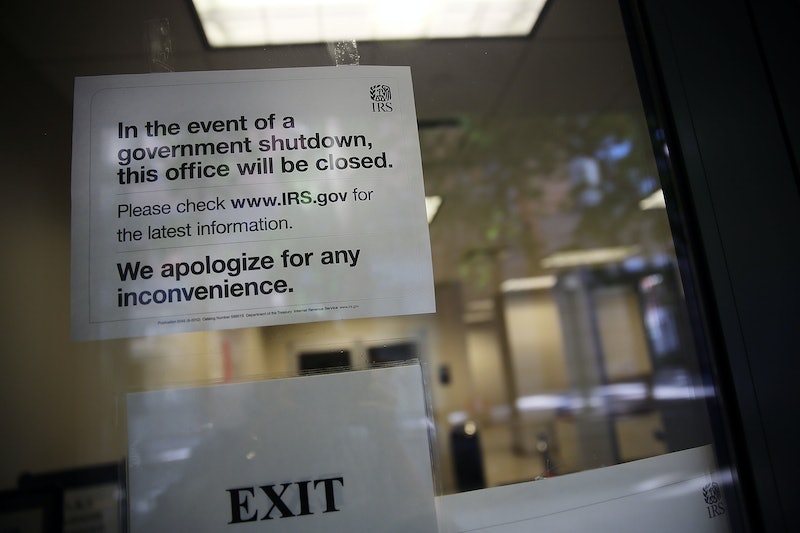 They say, time heals all wounds. And while the longest government shutdown in U.S. history is over — for now, at least — some federal agencies are going to need time to recover. But, according to a government watchdog group, there's at least one agency that's likely to have a long road to recovery before it. In fact, the Internal Revenue Service (IRS) may need a year to shake the shutdown off, if not more, The Washington Post has reported.

IRS-focused government watchdog group the National Taxpayer Advocate reportedly told House aides that it will likely be at least a year before operations at the IRS are fully returned to normal, The Washington Post reported. Of course, that's assuming that Congressional leaders and the president will be able to come to an agreement on a long-term spending deal during this three-week reprieve. A second government shutdown could further extend the IRS' full recovery.

A partial government shutdown that began Dec. 22 brought operations at the IRS to a halt ahead of what is expected to be a busier and much more complicated tax season than normal as it will be the first time taxpayers file under the Tax Cuts and Jobs Act. (The new tax law has been described by the IRS as "the largest overhaul of the Tax Code since 1986.")

Although it's unclear exactly how, or even if, the now-ended government shutdown will impact the IRS' ability to process refunds on time (the IRS has suggested no but IRS union leaders said maybe), the agency reportedly has a lot of work to catch up on. According to The Washington Post, returning IRS employees will have to slog through "a backlog of 5 million unanswered pieces of mail from taxpayers," which piled up during the shutdown. The agency is also reportedly behind on training new and longstanding employees on how to implement recent tax code reforms.

Earlier this month, the IRS announced it would begin processing tax returns on Jan. 28 and issue refunds "as planned." "We are committed to ensuring that taxpayers receive their refunds notwithstanding the government shutdown," IRS Commissioner Chuck Rrettig said in a statement released earlier this month.

In fact, The New York Times reported that IRS officials "painted a grim picture of the agency's operational capacity" when briefing congressional staffers Friday about the agency's status heading into tax season. Further compounding matters at the agency was the fact that thousands of IRS employees who'd been ordered by the Trump administration to return to work, without pay, during the shutdown failed to show up. Congressional staffers briefed on the issue told The Times that less than half of the 26,000 employees who'd been recalled to work actually showed up.

According to ABC News, many recalled IRS employees cited financial hardships such as the cost of childcare or transportation as preventing them from returning to work without pay. For others, it was responsibilities to new employers that kept them away. IRS officials reportedly told congressional aides the agency had lost 25 information technology (IT) staffers every week since the shutdown began in mid-December.