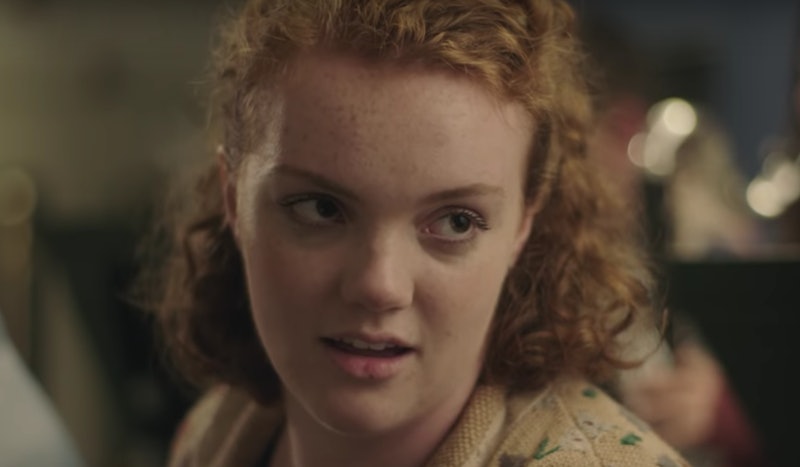 Feel like boning up on a classic without ever cracking a book? The trailer for Sierra Burgess is a Loser is here, and it promises to make you look smart in front of your friends with minimal effort. The Netflix original film is a modern day take on the classic tale Cyrano de Bergerac. The movie takes the classic narrative and centers it around the teenage set with a social media twist — the two leads cross paths after a text is sent to the wrong number, and even use a "faulty" video chat to continue the ruse. Sounds interesting, right? Well, the project hits screens on Sep. 7, so excited fans don't have long to wait.

Anyone following along with this project already knew that Sierra Burgess is a Loser starred Stranger Things fan favorite Shannon Purser, who played Barb in the beloved series' first season. (And was so popular that everyone's had their fingers crossed ever since, hoping that the creators find ways to work her back into the narrative.) But until the trailer arrived, it wasn't exactly clear whether or not Purser was going to survive her newest Netflix outing. Luckily, it looks like Purser's newest role takes place in an Upside Down-less world, so no risk of being killed by a mysterious monster.

Purser plays the titular character, Sierra Burgess, whose very name is a play on Cyrano's. (Say it to yourself in your head and you'll see: Sierra Burgess, Cyrano de Bergerac. You get it.) In the classic tale, written as a play by Edmond Costand in 1897, de Bergerac is an unsightly gentleman whose larger-than-average nose makes him unattractive to the women he might wish to pursue. But what he does have is a way with words, which he uses to help a fellow suitor with a handsome face and an empty head woo the beautiful Roxane.

What's uncomfortable here is that even though Purser is in the title role, with many of the plot points still intact, nothing has been done to alter her appearance. So at one point in the trailer, when she tearfully utters the line, "Do you have any idea what it's like to be a teenage girl, and to look like this?," it's a bit confusing. Purser, after all, is a beautiful young woman learning to live inside her own body, and taking ownership of who she is and what she wants. Then again, this movie is set in high school. And, as everyone knows, no matter how much confidence Sierra can muster, telling herself in the mirror that she is a "magnificent beast," and insisting to her college counselor that she wants to go to Stanford, all it takes is a few mean girls and boys to knock her down. And, though it is disappointing to see Purser's body and appearance be categorized as somehow worthy of high school ridicule, there's no denying how relatable it is.

In Sierra Burgess is a Loser, Sierra isn't the butt of jokes for any reason other than teenage cruelty. Luckily, that cruelty seems to fade in the trailer as a friendship forms as beautiful, popular, class-failing Veronica (Kristine Froseth) helps Sierra to woo her crush. And as long as it's handled properly, it could be an interesting twist of the narrative in a reboot that's already gender bent and moved down into the tech-savvy teen generation. Ideally, the film will find its way to a moral about how no one should be judged on their appearance for any reason, but with Sierra Burgess placed firmly within a high school hierarchy, it adds another layer of body image and judgement to navigate.