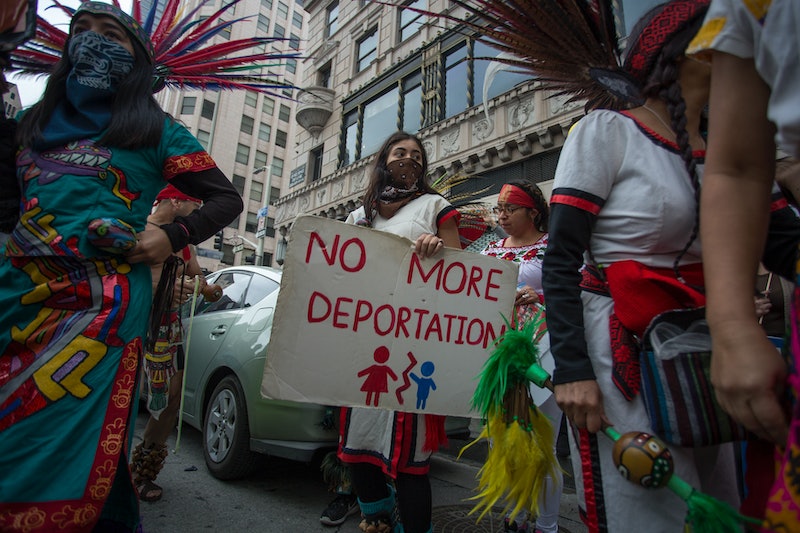 Donald Trump ran for president spewing fearmongering claims about immigrants and foreigners. Barely a month into his presidency, he appears to be turning that rhetoric into action. Following an executive order targeting visitors and refugees from seven Muslim-majority countries which Trump issued in January, Department of Homeland Security Secretary John Kelly issued two memos regarding deportation and border protection on Monday, offering guidelines for how the government will fight illegal immigration, and they are scary.

The two memos call for, among other things, a vast expansion of the border patrol and immigration officer ranks by as many as 15,000 new agents, widening the pool of immigrants targeted for deportation, and a speeding up of deportation hearings. The memos also expand the federal government’s ability to empower local law enforcement to act as immigration agents, though they will not be enlisting the National Guard, as was initially suspected last week.

The memo also directed federal officials to begin designing, constructing and funding the wall (the section in the memo is actually called “Border Wall Construction And Funding,” but I think we can all agree that funding should come before construction). There’s even a line in there insisting that the wall be made out of “materials originating in the United States to the maximum extent permitted by law,” because I guess there would be nothing more ironic than a border wall built with foreign materials?

What I find most disconcerting, though, is that I sense a tone of hate sewn into the language of the memo itself. One paragraph begins, "Criminal aliens routinely victimize Americans and other legal residents,” which, to me, sounds as obvious as “Criminal blondes routinely victimize Americans.” Of course they do; they’re criminals. The section goes on to establish the Victims of Immigration Crime Engagement office, to be funded supposedly by “resources that are currently used to advocate on behalf of illegal aliens” — notice how we’re not talking about immigrants who have committed a crime, but all undocumented immigrants.

Of course, there is one crucial component to all this: Congress will have to approve any new funds to go towards these programs. Though the Republicans have the votes in both the House and the Senate (assuming they use the process of reconciliation rather than passing a new law), it’s possible that a spending a boatload of cash to alienate Hispanic American voters might not go over quite so well.

It’s scary times for immigrants living in America, with people sharing widely on social media guidance for what to do if ICE agents come to your door. For those of us who don’t live in fear of deportation — and believe that our neighbors shouldn’t either — contacting your congressional representatives has never been more important.