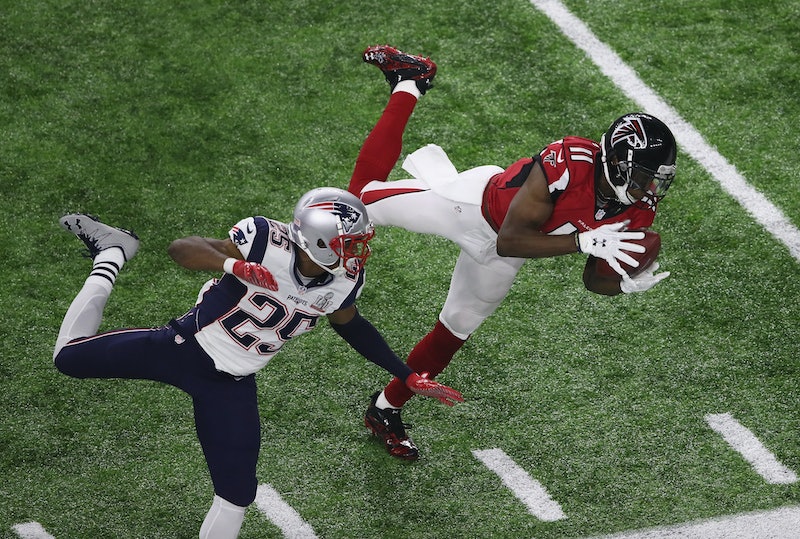 A viral meme about a Simpson's episode supposedly depicting the Patriots beating the Falcons 31-23 is making its way around social media. However, this Simpsons episode proves that the viral meme is actually a fake.

In "The Town," a team known as the Boston Americans (who are indeed supposed to be representative of the Patriots) play a team called the Springfield Atoms from Illinois. This is a screen shot from the episode, which depicts the score between the Atoms and the Americans, not the Falcons and the Patriots as the viral meme would lead you to believe.

It is understandable how people would believe that The Simpsons could perhaps accurately predict a Super Bowl outcome. The show is relatively well-known for its predictive abilities; for example, it actually depicted a Donald Trump presidency before Trump ever became President. Additionally, it has presented a whole host of other events that actually ended up occurring in reality. According to an article in TIME:

The Simpsons have an eerie ability to predict the future. Six years ago they predicted that Bengt Holmström of MIT would win the Nobel Prize for Economics in 2016, which he did. They foresaw the tiger attack on Siegfried and Roy, helped design the iPhone, predicted Apple Watches, and foretold that the Rolling Stones would still be touring in 2016.

While the Simpsons meme very well could have been real given the reputation of the show for its apparent ability to foresee future events, it is nonetheless always important to do your research before you accept a meme as fact. Images can always be very easily altered, as demonstrated by the Super Bowl Simpsons meme.

Here is the beginning of the plot for that episode, per Wikipedia:

Homer goes to Moe's to watch a football game between the Springfield Atoms and the Boston Americans, but they end up bitterly arguing with a group of Boston fans who are in Springfield for a Dennis Lehane convention over their teams being alleged to be cheaters and losers.

The episode was originally titled "Patriot Games", as seen in the script cover. However, the title was changed in January 2016 to "The Town". A deleted scene showed Bart and Lisa outside a "Stawp & Shawp" (referencing Stop & Shop) with newspaper dispensers filled with The Herald newspapers.

So, while the meme certainly was fake and lessons about being precautious when accepting memes as undeniable truth are absolutely applicable, perhaps the Simpsons episode still does once again, at least in some way, demonstrate the show's impressive ability to somewhat foresee future events.

While "The Town" was not depicting the Super Bowl and did not feature the Falcons or the Patriots, it did show a team representing a spoof of the Patriots winning (to the disdain of many others) a close football game; this connection is at least certainly noteworthy — and perhaps an episode worth watching.