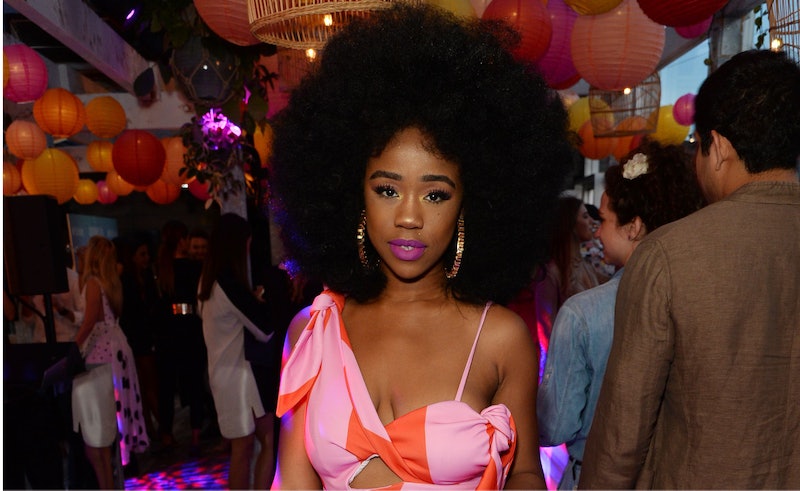 The idea that only men should enjoy sex is an archaic thought, but new research reveals that women are still enduring discomfort and pain during sex. So one of the world's most well-known sexual wellbeing brands has decided to do something about it. Durex's new campaign with The Slumflower's Chidera Eggerue is banishing uncomfortable sex by asking people to consider lube as a solution.

Durex surveyed more than 1,000 sexually active adults in the UK, and results showed that three quarters of British women have experienced sexual discomfort. Plus, many women are actively avoiding sex or even lying to their partners about it. Almost a third of the women who mentioned discomfort said it made them less likely to want to have sex. Around one in 10, meanwhile, said they had faked an orgasm in order to "end sex more quickly," with one in five stopping intercourse completely.

In response to their research, Durex has launched a bold and totally honest advert to encourage use of its Naturals Intimate Gel, especially for those who experience vaginal dryness. (According to the NHS, causes of vaginal dryness range from the contraceptive pill to an underlying allergy or condition). The brand has also teamed up with two activists to further normalise the issue: Chidera Eggerue — more popularly known as The Slumflower — and YouTuber Hannah Witton.

"I'm a very action-based person," 24-year-old Eggerue tells me. "If you have an issue with something and it makes you uncomfortable enough for you to constantly think about it, what are the steps that you can take to change it? If you're not changing anything, you're going to remain uncomfortable and that's counterproductive for everybody involved in the situation."

Eggerue's used this method to show why #SaggyBoobsMatter, why people shouldn't be afraid to be alone, and, now, why society needs to be open about sex. Eggerue says that she chose to be involved with this particular Durex campaign for one simple reason: "Because the overall message is about women taking the power back and speaking up for themselves."

Lube may seem too simple of a solution, but the statistics don't lie. "Almost a third of women surveyed last year consider lubricants to be taboo," Durex's senior brand manager Claudia Bencini says. But a 2013 study published in the Journal of Sexual Medicine stated that nine in 10 women reported sex feeling better with lubricated assistance.

Eggerue believes dichotomies like this form part of a wider taboo: women's comfort during sex. "In the UK, we have a culture where we tend to glaze over things," she notes. "Fifty-three percent of women don't talk to their partner during sex and it's a product of misogyny. It's this whole idea that women's needs are inherently less important. And when you internalise that belief as a woman, you're not going to speak up because you feel like speaking up is an inconvenience.

"You remain silent in [the] hope that your silence will increase the overall pleasure for your partner. You're constantly putting everyone else first, which is how women are taught to carry themselves. [It's] absolutely absurd."

Durex found that only 57 percent of men had noticed a female partner's discomfort during sex. Despite the fact that men are "100 percent accountable" for such a statistic, according to Eggerue, the activist believes that women have the power to provide an instant solution.

"Ask yourself, 'Do I deserve better? What can I do to welcome better into my life?'" [And] learn your body. It's quite ambitious to expect someone else to automatically know what your needs are if you don't know what they are first."

Eggerue advocates for this kind of knowledge and self-care in all areas of your life, especially when it comes to intimacy.

For women, that means asking yourself some uncomfortable questions and reassessing the power dynamics in your romantic relationships. For men, it's learning to view women as people who are entitled to pleasure. ("It's not a woman's responsibility in any capacity to convince a man [of this]," adds Eggerue.) Ultimately, she makes the point that a healthy relationship is one where both parties feel comfortable speaking openly about any topic.

Whether it's discussing how to introduce lube into your sex life or just being honest with your partner about what feeling you're really experiencing, Durex's campaign is giving airtime to conversations that many have (probably) longed to have for some time. Yes, the truth may be difficult to deal with at first, but, as Eggerue says: "It always begins with yourself."