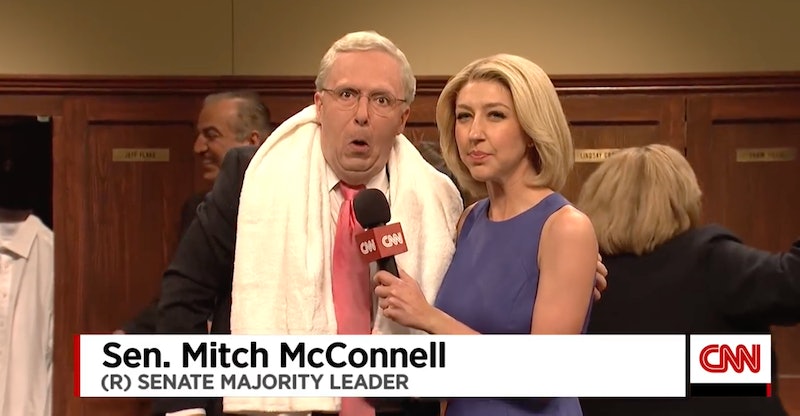 Just hours after the Supreme Court justice confirmation vote, Saturday Night Live joked about the Kavanaugh vote in their cold open. Instead of featuring Justice Brett Kavanaugh, recently played by Matt Damon, the skit focused on the Republican senators who advanced the nomination and confirmation — despite the remaining allegations of sexual assault and misconduct (which Kavanaugh denies). The skit centered on an imagined Republican locker room and portrays a post-vote celebration.

The bit opens with Kenan Thompson playing CNN's Don Lemon, who says that the network has had "cry breaks" during their coverage. He then goes to a live report from Heidi Gardner playing chief political correspondent Dana Bash. She says the mood is "nothing short of euphoric" and then interviews the Republican senators. "There are a lot of pacemakers being put to the test tonight," she says.

Kate McKinnon was next, playing Sen. Lindsey Graham again. She gave Gardner as Bash a "Kavanaugh world champion" hat — which Bash immediately took off. "How amazing is this? We made a lot of women real worried today but I'm not getting pregnant, so I don't care," McKinnon said as Graham. He also "thanked the male lord" that Vice President Mike Pence didn't have to cast the tie-breaking vote.

McKinnon as Graham then drags Cecily Strong as Susan Collins into the shot. "We couldn't have done it without Susan Collins," Graham says, introducing her.

"Please, the last thing I wanted was to make this about me," Strong as Collins says. "That's why I told everyone to tune in at 3 p.m. so I could tell all my female supporters, 'Psych!'"

Strong as Collins also says, "I believe it's important to believe women until it's time to stop. But I also believe that I'm a guys' gal, you know, I can party with the big dogs. You know, we're going to have fun tonight ... We're going to party like it's 2020 when Susan Rice takes my seat."

Mooney as Kennedy interjects at this point to yell, "That's our girl. That's our one girl." Collins was the only woman to vote for confirming Kavanaugh.

Several of the senators then put on goggles in preparation of spraying beer all over. "These are for the Miller High Life, the champagne of beer," Bennett's McConnell says.

Saturday Night Live parodies will likely cover that too.