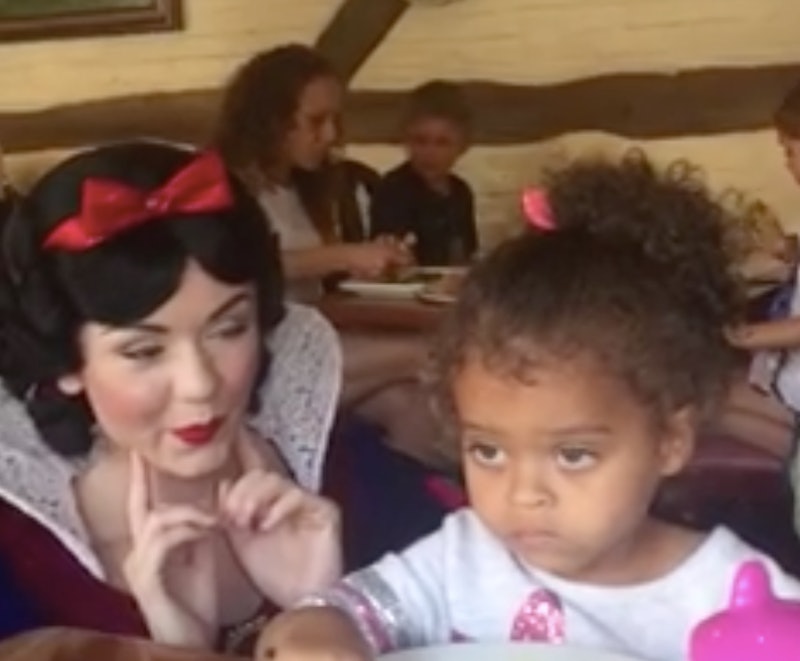 If you've ever had a bad day, logged on to Twitter and saw that one person that's always angry is going off on a tangent or ripped a hole in your favorite article of clothing, you know the feeling. Better yet, the face. It's the same face a young girl named Kaylin who was fed up with Snow White's attempt to make her smile. But in typical fashion, Twitter found a way to start conversations after people like activist Deray McKesson responded to the video. After a few RT's, it became the source of plenty of jokes, funny captions and humorous dialogue about what it's like to be a POC in white spaces.

But as a WOC, this is the penultimate viral video that perfectly describes the daily struggles of being one of the few people of color in a professional setting. Sometimes, just being yourself becomes a thread of discussion in the office or feeling like you have choose between addressing a microaggression or being seen as negative or angry. At this point, we know that racial bias is a thing, and for WOC, it can mean anything from your hair to the way your name is spelled could mean you're treated differently.

Originally shared on Facebook by Katrell Hunter, a viral video was born:

Not only is it hilarious as a video, but still shots of Kaylin's face are prime meme material. But dear readers, Kaylin's expression of being fed up with the charades says so much more about lived experiences that easily translate into your work life.

1. That one co-worker who is obsessed with what you bring for lunch.

It always seems like they're right on time as you take your tupperware out of the microwave. They've asked you everything from what you use to season your food If they've ever gone as far as asking if they can share a bite, the way Kaylin holds her spoon looks like you debating whether or not to agree.

2. Walking into the office the morning after you've changed your hair.

If I said I didn't mentally prepare just a little bit to walk into the office the next day, I would be lying. Having to explain how you grew 12 inches of hair accomplish those micro-braids/box braids is borderline exhausting after the third or fourth time.

3. When someones asks to touch it.

This goes without question, that this is a delicate situation. While you don't want to offend, it took a few hours to get it to look like that, and frankly, we aren't at a pet store.

4. When you want to decline going out for drinks but...

Of course, they can't make you, but it certainly feels like it isn't always an option to say no. Office politics are sometimes such an integral part of finally being recognized by your peers that magazines like Forbes have recommended that women "play the game". This could be an entire web series about the ongoing internal battle when you want to be honest, but forced to play office politics.

5. When you always seem to get more work, but you're afraid to say no.

You've been branded in the office as resilient and even smart, and you don't want to disappoint. So when that one co-worker makes their project, your project, it's deciding between being seen as a "team player" or addressing a real issue in the office. After all, the pressure is real to say "yes" for women in general. According to the Harvard Business Review, it's so real that women often experience more work stress than their male peers.

The Atlantic referred to this issue of how your identities play out in the workplace and cited Legal scholars Mitu Gulati and Devon Gorbado's book Working Identities. Their article mentioned a pressure to conform, which is a notch above just being "professional"; it's toeing lightly around everyone because you're different.

6. Feeling like you always have to fill in the racial gaps.

Elections, major award shows, or any other major event where race could possibly be a question, sometimes having those friendly conversations in the office are just plain tiring. Like when everyone else thought Katy Perry's performance on Saturday Night Live was hilarious, and you're debating on whether or not to say anything. You aren't obligated to answer, but the pressure to speak for your race/culture is ever present.

So not only did Kaylin give us life as she successfully shut down Snow White over a bowl of mac n' cheese, you can also find humor in what can seem like you're living two separate lives. However, if you're past laughing, there are ways to be heard and handle racial bias. Filing a complaint with the Equal Employment and Opportunity Committee, or simply setting a meeting to chat with your boss or co-worker can go a long way if you have the right support; and as Director of the Race Forward Research Institute Dom Appollon said to Essence, you need the right judge to take your claim seriously. So the fear of being misunderstood can certainly make that step difficult.

Last year, The Center For Racial Justice Innovation released a report outlining how companies should enforce protections under the law, but also how to reinforce a culture that promotes acceptance. Until more companies wake up to how different experiences create challenging environments for POCs, these jokes will remain a reality.