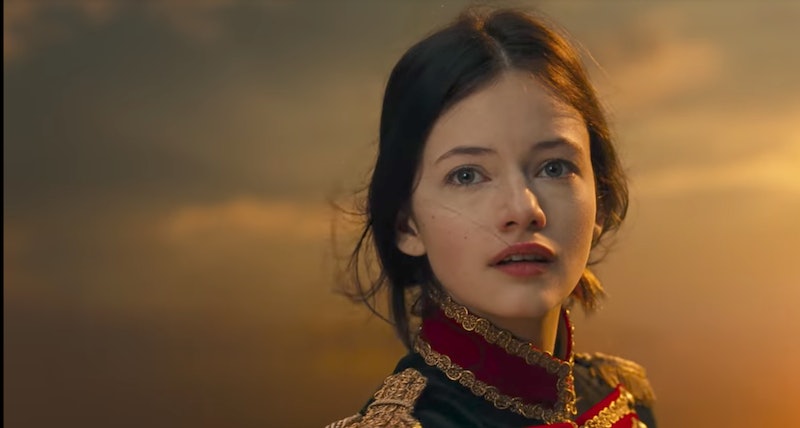 Disney fans watching the new trailer for The Nutcracker and the Four Realms on Wednesday morning got a blast from the past when they first heard the song playing over the clip, and it has nothing to do with the original ballet. The song in the Nutcracker and the Four Realms trailer is actually a cover of No Doubt's "Just A Girl" — a slowed-down, appropriately twinkly cover, performed by the artist BRIX, to be more precise.

BRIX (AKA Sophie Dupin) posted a version of the gorgeous cover to YouTube back in 2012. BRIX's vocals have also been featured in Cole Plante’s song “Before I’m Yours” and she also sang with the band Passion Pit on Saturday Night Live, according to her official website. The New York native's upcoming EP, Broken Vessel will be released this fall.

"Just A Girl," the mid-90s feminist anthem, is still a signature song of karaoke nights the world over. In other words, it's not exactly the first thing you think of when you think of the Nutcracker. But the message of the pop hit, about a woman who wants to break free from the limits put upon her because of her gender, is actually very relevant to Disney's new holiday blockbuster.

The song — and its message about not underestimating someone just because they're a girl — is an appropriate choice for the newest The Nutcracker and the Four Realms trailer, which really brings all of the film's female characters to the forefront. Yes, much of the trailer is narrated by Morgan Freeman (who plays Drosselmeyer), but the main focus is Clara, played by Mackenzie Foy, and her journey of discovering — and then fighting to save — the magical world that her late mother invented.

"The future of the realms lies with you," Freeman's character warns, adding, "Be careful who you trust," before Helen Mirren's evil Mother Ginger makes her first appearance. Mother Ginger, we are told by Keira Knightley's Sugar Plum Fairy, wants to rule all four realms of the Nutcracker kingdom, which means that it's up to Clara to stop her. It's then that the new ominous cover of No Doubt's song begins to take on an extra resonant meaning, as Clara, shortly after discovering that she's a princess in this magical new world, is tasked with taking on the villainess intent on tearing apart her mother's creation.

She is, in many ways, "just a girl," but the trailer makes it clear that she's also the only one who can save the people living in the four realms and restore harmony to this magical world. And considering that the film's villain, played by Mirren in a red wig, pirate makeup and showing off a truly chilling cackle, is also "just a girl," the choice of song highlights the film's female roles and the secret powers they all possess.

The use of "Just a Girl" to highlight the film's female characters — and to hint at the journey that Foy's Clara will embark on over the course of the movie's runtime — shows the impact that Stefani's writing has had on generations of women since the song's 1995 release.

Gwen Stefani wrote "Just A Girl" as a critique against the way women are seen in society after arriving home to her strict parents in the wee hours of the morning. “My parents were quite strict with me and I was living at home, even into my 20s. And I would have to come home and knock my parents’ door. And it was frustrating because I was already like older,” Stefani told People in 2017 about the inspiration behind the song. “I can remember thinking, ‘Wow, I’m in the car right now, I’m driving home, it’s like one in the morning and if something did happen to me, I’m vulnerable because I’m a girl.’ And you start to think, ‘Wow, maybe people actually look at me different because I am a female.'"

However, when she wrote the song (one of the very first ones she remembers writing), Stefani didn't think it would have the resonance and significance that it does today. “I just wanted to write a song to express how I was feeling in that moment and I never in my wildest dreams thought that anyone would hear it,” the singer and The Voice coach told People. Over 20 years later, not only is "Just A Girl" still being heard by people around the world, it's setting the stage for what looks like a feminist interpretation of a classic.

Editor's Note: This post has been updated from its original version to properly credit BRIX.