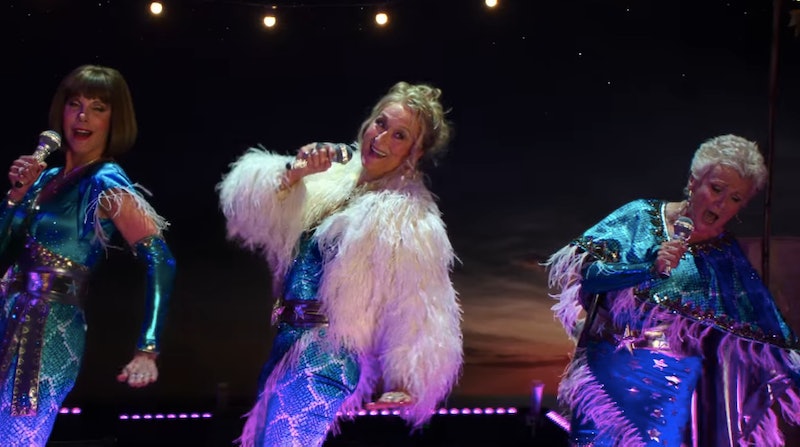 The first Mamma Mia! movie was based on a musical that was based on a previous movie and the songs of ABBA. That was already a winding road, and considering there is no second musical for the Mamma Mia! sequel to be based on... well, what's the deal this time around? What songs are in Mamma Mia! 2? Is this film going to be full of ABBA deep cuts?

In short: No. Some of the songs used in the original musical and the first movie 10 years ago are being included once again, as well as many additional ABBA songs, because they have a ton of music — eight studio albums worth, plus other recordings. The Mamma Mia! Here We Go Again soundtrack was released on July 13, and the tracklist includes 18 songs, along with the names of the actors who sing them. (Full list below.)

Returning classics include, "Dancing Queen," "Super Trouper," "I Have A Dream" and, of course, "Mamma Mia". But this time, the songs will be performed by different actors. For instance, while "Mamma Mia" was performed by Meryl Streep in the original, on the soundtrack from the sequel it's performed by Lily James (who plays the younger version of Streep's character, Donna), Jessica Keenan Wynn (young Tanya), and Alexa Davies (young Rosie). On "I Have A Dream" James will take over for Amanda Seyfried, who performed the song for the first movie.

If Here We Go Again is anything like the original, the musical numbers will be packed in. But just because a song appears on the soundtrack does not necessarily mean it will be in the movie and vice versa. For example, "Waterloo" was included at the end of the first movie, but is not on the first movie's soundtrack, so it's possible that there will be similar situations with the new movie. (Don't worry, though, "Waterloo" fans. It's on the sequel's soundtrack and, judging by the trailer, is also performed in the movie.)

As far as new songs go, the most exciting for fans is probably "Fernando". It's on the soundtrack and in the movie, and is performed by Cher and Andy García. (García plays a new character named, you guessed it, Fernando.)

Other new additions include, "When I Kissed The Teacher", "Andante, Andante", and "The Day Before You Came", the latter of which has some fans already worried, as pointed out by The Sun. After the trailers started coming out speculation began that Streep's character was going to die — or already have died — in the sequel. Since "The Day Before You Came" is interpreted by some to be about a woman's death and is performed by Streep on the soundtrack, this just added to the theory even more.

Seyfried responded to the speculation during an interview with Entertainment Tonight, and her response was pretty mysterious and definitely not a denial that Streep's character dies. "You do see her. She’s, Meryl is very much a part of this movie," the actor who plays Donna's daughter, Sophie, said. "No, there are absolutely no flashbacks. No, because all the ‘flashbacks’ are of Lily [James] playing Donna. So it’s a prequel and a sequel, and so you see Meryl is very much a part of it."

Fans get three songs featuring Streep's singing on the soundtrack. Will these also be included in the movie? Will they foreshadow Donna's death? Is this why Seyfried performs a song with Julie Walters and Christine Baranski effectively showing Sophie taking her mom's place in the Dynamos? These questions and many more (probably not including the true identity of Sophie's biological father) will be answered when Mamma Mia! Here We Go Again is released on July 20. For now, check out the full soundtrack list below.

3. "One Of Us" — Amanda Seyfried, Dominic Cooper