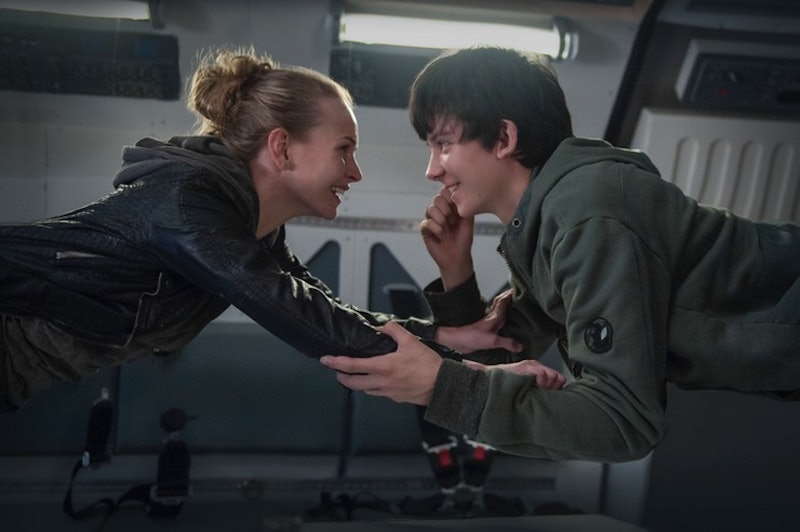 Somewhere between a galaxy far, far away and Earth, there's a space for a new romantic coming-of-age film asking the question, "What if a human was born on another planet?" Sounds crazy, right? Well, maybe it's not that crazy. In the new film The Space Between Us, which is set for release July 29, Asa Butterfield and Britt Robertson explore what it means to be human — beyond the normal anatomical things that we all learned in health class in school. There's a deeper meaning behind the film, learning to live to the fullest extent despite limitations, and quite literally unearthing emotions that do or (in this case) don't come natural.

I first started contemplating what it means to be human when I visited the set of the film in Albuquerque, New Mexico. I know, deep thoughts for a relatively empty landscape — even though the landscape itself is what really sets the scene for the film.

The film can be classified as "sci-possible," something that takes sci-fi elements that we're all familiar with from other pop culture hits (living in space, for example) with things that could, scientifically, happen one day. The film is set in the future, but not too far that it seems unattainable, which seems to make it possible. And even if it's only a little bit possible, it's really all you need to let your imagination run a gamut.

For Butterfield, the film is right up his alley. "I'm a big science-fiction fan," he tells reporters on set of the film. "I think what's great about sci-fi is that everything that you sort of see, it all comes from technology that we already have, but just it's far more advanced."

The film consists of a lot of moving pieces that converge when Gardner Elliot (Butterfield) becomes the first human born on Mars. His childhood and adolescence is isolated after his mother dies during childbirth, but his imagination is vast. In particular, his interest in Earth takes over his body, to the point where he can no longer physically stay in space.

Issues arise when Gardner leaves space. Scientifically, a human body that is raised on Mars would not deal well on Earth with the impact of gravity. The sheer weight of it would actually begin to crush undeveloped bones and cause a heart to pump faster than an human on Earth's heart. The film doesn't take this type of research lightly, as it is revealed during our visit that producer Richard Lewis and director Peter Chelsom, along with those working on the script of the film, did their research with NASA to make sure the "possible" part of "sci-possible" could actually, eventually, happen.

"They are almost giving glimpses into our future, whereas fantasy is totally, totally made up. But this is almost believable, which I think is pretty cool," Butterfield says, summing up the out-of-this-world element the film instills.

Britt Robertson plays much more than Gardner's love interest in the film. Tulsa (Robertson) has had a tough childhood and has been hardened by her time in foster homes. She doesn't see Earth with the same wonder as Gardner, but when the two meet online, they have a connection that can only be classified as out of this world.

"[Tulsa] humanizes him," Butterfield says to reporters. Unbeknownst to Tulsa, Gardner just shows up at her school one day, and after an initially cold welcome, the two join forces to see the country and find Gardner's birth father. "Through her, he learns to understand what it means to be human. There are emotions that he figures out that he's never experienced before."

In a way, the two are very similar — they don't know how to feel human feelings and they have both been, essentially, robbed of a childhood. Gardner because he's been raised in such a scientific setting and Tulsa because she's never been given the opportunity.

"They meet for the first time — he's bizarre, and he's weird, and he's everything she's looking for in a way, because it's not everything she knows," Robertson says. In the scene we're observing, Gardner finds Tulsa at her high school where he is entranced by small things like the emergency shower in science class.

He's a fish out of water, Gardner, but it's his ignorance to being human that works so well with the tough-as-nails Tulsa. Exploring "what it means to be human" is heavy stuff, but through the sense of adventure, love, and heartbreak, unknown territory is explored and unearthed.

Of course, it's not all deep. When asked what advice he'd give his character when coming to Earth for the first time, Butterfield says, "Don’t talk to shady looking strangers (laughs), look both ways when you cross the road, [and] learn to say the appropriate things in certain situations..." That is some out-of-this-world advice, if I do say so myself.

The Space Between Us comes out July 29.