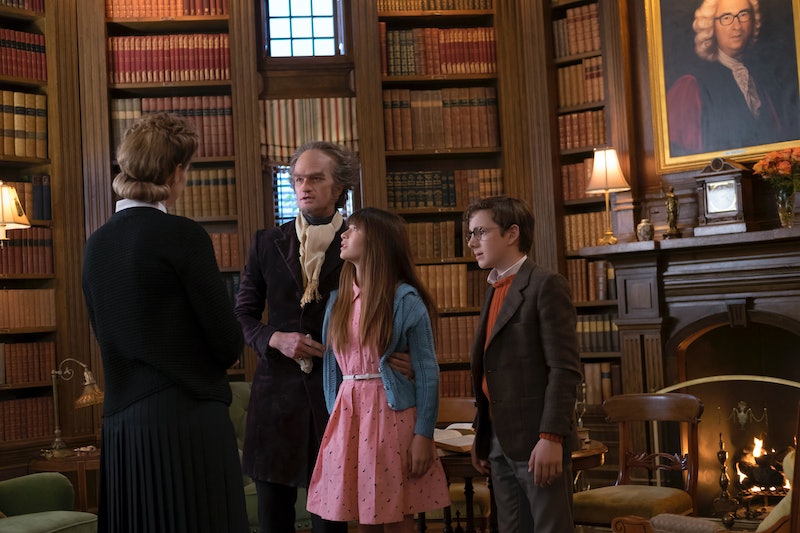 In keeping with the spirit of the series it's based on, Netflix's A Series of Unfortunate Events is full of dark humor, sinister characters, and mysterious twists and turns. And, most importantly, the adaptation gives viewers a spot-on depiction of the precocious children at the center of the story: Violet, Klaus, and Sunny Baudelaire. After their parents perish in a fire that may or may not have been set by Count Olaf, these orphans have a seriously hard-knock life ahead of them. Luckily, each of the three is a force to be reckoned with in his or her own way and Count Olaf isn't going to get his hands on the family fortune as easily as he hoped. As the children search for answers about their parents, one mysterious item may hold clues — so what's the spyglass on A Series of Unfortunate Events? Spoilers for Season 1 ahead.

Klaus discovers the spyglass early in the season and the Baudelaires bring it with them as they go through a revolving door of guardians, all of whom are either sinister or completely hapless. As the season comes to a close, Mr. Poe drops them off at Prufrock Boarding school and viewers see the Quagmire siblings sitting nearby. The Quagmires possess the other half of the spyglass, and it's a sign of the connection between the two sets of siblings.

In the books, the spyglass leads the children to the discovery of the V.F.D. — an organization that the Baudelaire parents were members of. The society itself remains shrouded in mystery, but its official insignia is a single eye made up of the letters V, F, and D. Lemony Snicket tells readers that the organization primarily puts out fires, but also carries out other humanitarian acts — however, its members use disguises and codes in order to keep its activities and mission a secret.

The V.F.D. is central to many fan theories about the series, one of which centers around the idea that the quest for V.F.D is an allegory for adulthood. The Baudelaire children view the secret society as a place that will be safe once they're within its confines — similar to how children often view adulthood as a place where they'll learn the answers once they finally arrive. As the books progress, Violet, Klaus, and Sunny become increasingly involved with the V.F.D, but answers about the society itself remain elusive even as they're brought into the fold.

If A Series of Unfortunate Events returns for Season 2, the spyglass is a major clue that the Netflix series will focus on the connection between the Baudelaires and the Quagmire kids, as well as their investigation into the V.F.D. But, one thing we shouldn't expect is a neat, tidy explanation for every mystery — the TV series is as sophisticated as the books it's based on, and fans will likely be left to theorize about the show's mysteries as well.