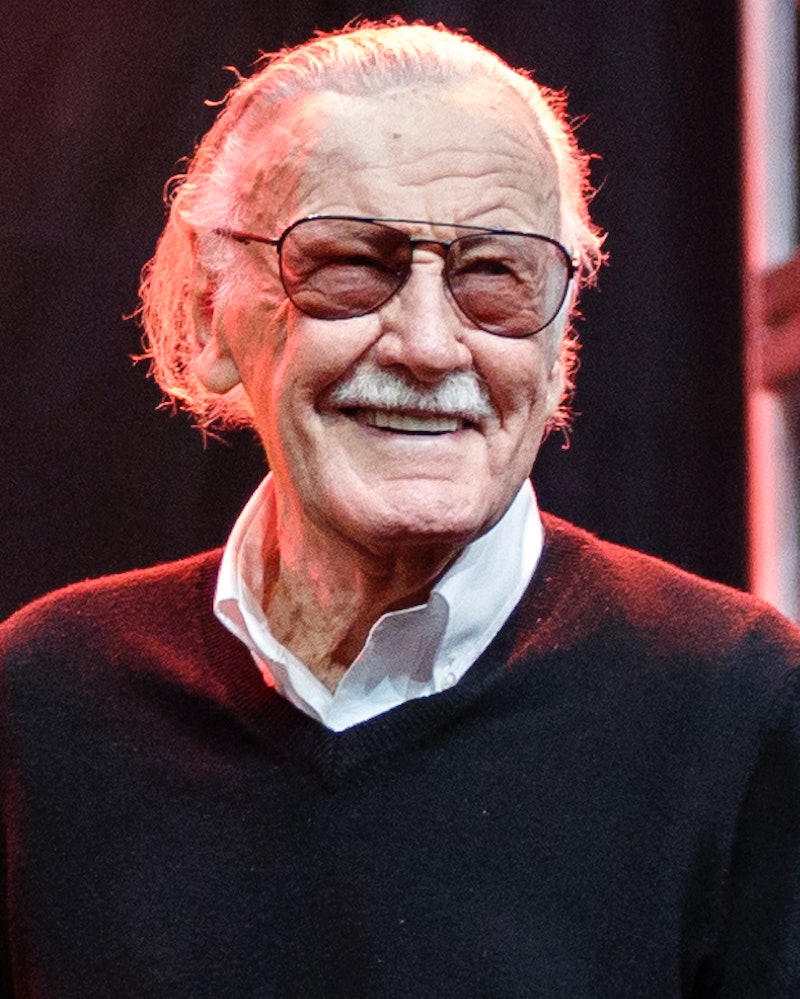 Stan Lee's passing in November of last year left fans bereft. Even those who'd never picked up an issue of Fantastic Four or Spider-Man in their life, or who were born well after the Silver Age of comics Lee helped usher in, recognize his name and work from Marvel's wildly popular series of movies and television shows. And many recognized the man himself from his over 55 cameos in many of those works, when he'd appear in the background as a bystander or deliver a well-timed quip. For those still missing the truest True Believer, the Stan Lee cameo in Captain Marvel circles back to how Lee helped jump-start the fan culture that's led to the mainstream popularization of formerly nerdy turf. Spoilers ahead!

The film acknowledges Lee's passing at the movie's outset. Captain Marvel opens with the familiar Marvel logo, but instead of the usual flashing stills of the company's many characters, all images are replaced with video and photos of Lee, ending with a black card that reads, "Thank you, Stan." If you weren't already tearing up...

If you've watched the trailers for Captain Marvel you've likely already caught the scene in which Lee appears. Captain Marvel trails a Skrull shape-shifter onto the subway, punching right in the face one that takes the form of a sweet little old lady. Lee is sitting on the same subway, holding a Mallrats script, practicing the "Trust me, true believer!" line under his breath.

For those born in 1995 or after, Mallrats is director Kevin Smith's follow up to Clerks. The mall-centric movie follows an assorted cast of oddballs and two slackers, Quint (Jeremy London) and Brodie (Jason Lee), as they all hang out at the mall and Quint attempts to win back his girlfriend. Stan Lee has more than just a cameo here — he's a worshipped hero to both 'rats (and of course, director Smith). While Brodie peppers him with questions about weird minutia such as what The Thing's thing looks like, Lee gets extra screen time offering solid life and relationship advice to the lovelorn Quint. The movie is an early example of the proudly nerdy deep fan pandering that's since shifted from "loser" fringe to the dominating mainstream culture, making the script even more of a meta-reference to catch in the latest Marvel tentpole movie.

The cameo fits perfectly within Captain Marvel's setting, taking place in 1995, before most other canon Marvel films, save Captain America: The First Avenger.

Lee's first appearance as himself was on Jim Henson's Muppet Babies, in the 1989 episode "Comic Capers." He'd appeared as Jury Foreman in TV movie The Trial of the Incredible Hulk earlier that same year, and as Marvel Comics Editor in 1990's The Ambulance, in which a comic illustrator tries to track down a mystery woman. But it was Mallrats that marked his first appearance for fans, set up by a fan.

Captain Marvel won't be Lee's last cameo either. In an interview with BBC Radio Scotland, Avengers: Endgame co-director Joe Russo confirmed Lee's cameo for that film was shot back in April 2018. Talking to ComicBook.com at that time, before Lee's death, Russo explained "[Lee] doesn’t love to fly — so we try to get him out for his cameos around the same time...if we have other movies shooting on the same lot that we’re on, for instance Ant-Man 2 or Avengers 4, we group his cameos together and then move him from one set to the next and kind of get him through his cameos in one day."

So though his Captain Marvel cameo may bring a tear to your eye, you will get to see Lee again, when Endgame comes to theaters on Apr. 26.