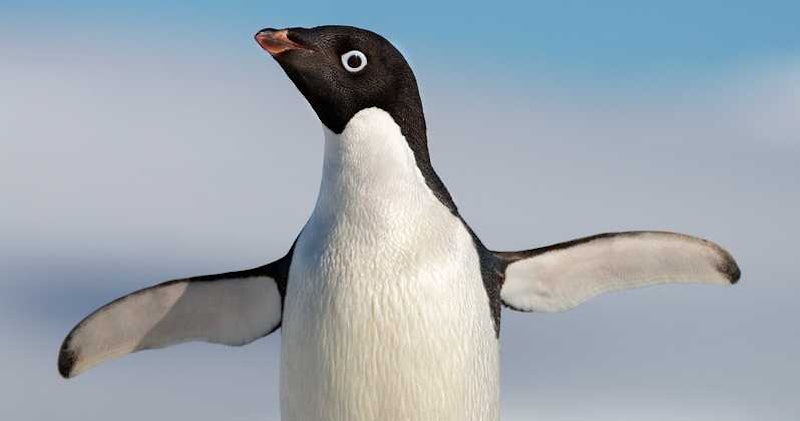 The new Disneynature wildlife documentary Penguins, coming out April 17, follows the life and adventures of an Adélie penguin named Steve as he grows up, hits the dating scene, finds love, and starts a family. In the exclusive behind-the-scenes clip below, Penguins narrator Ed Helms talks about how much he relates to Steve's awkward phase. Apparently, adolescence isn't any less goofy or difficult to navigate just because you're a penguin.

According to the WWF, Adélie are smallest species of penguin in the Antarctic. Their scientific name is Pygoscelis adeliae — adeliae as a reference to the wife of the scientist who discovered the species, and pygoscelis meaning "rump-legged." The Adélie may look stubby, but like all penguins, they are graceful, expert swimmers. And the Adélie in particular are known to be spunky, fighting potential predators many times their size despite their small stature.

Though the film focuses on Steve's troubles finding a mate and raising a family in the unforgiving Antarctic, with predators, climate change, and harsh conditions impeding his survival, this clip focuses on his early years. According to NZ Birds, Adélie penguin chicks are born with a fluffy coat of down that they eventually shed, or moult, before heading to swim for the first time. Adélie continue to moult yearly throughout their lives to maintain healthy feathers, and unlike flying birds, who gradually shed and replace feathers through constant maintenance, they go through a "catastrophic" moult, shedding all their feathers simultaneously in the shortest time possible.

Penguin feathers keep them water-tight and warm in the frigid Antarctic waters, so they're not able to swim, and by extension, eat, while they're shedding. According to Australia's Antarctic Division, it's an uncomfortable time for the normally social and chatty birds. They stand around, avoiding socialization and feeling surly, all while tufts of down are replaced with feathers resulting in some truly bizarre looks.

The clip highlights some of Steve's best and goofiest of these temporary styles, with feathers sticking out at odd angles and poofs of fluffier feathers clumped about. Helms gets a surprise when his own gawky years are showcased, particularly a swooped 'do that he defends by saying, "It was cool back then, ok?" Lucky for penguins, they don't have to take yearbook photos to memorialize each moult. After the moulting is complete, the penguins are once again watertight and able to swim. Steve's adventures continue as he and his mate try and raise their chicks across the Antarctic plane.

Disney and its fans aren't the first to realize the charm of these plucky penguins. In a 1910 book about an ill-fated Antarctic expedition, titled appropriately The Worst Journey In The World, explorer Apsley Cherry-Garrard talks at length about them, describing Adélies in particular as "extraordinarily like children, these little people of the Antarctic world, either like children or like old men, full of their own importance." While the overly-curious penguins caused them plenty of trouble, Cherry-Garrard held them in high regard saying, "Whatever a penguin does has individuality, and he lays bare his whole life for all to see. He cannot fly away. And because he is quaint in all that he does, but still more because he is fighting against bigger odds than any other bird, and fighting always with the most gallant pluck."

Disneynature's Penguins will share that penguin pluck with the world in crisp IMAX, starting this Friday.