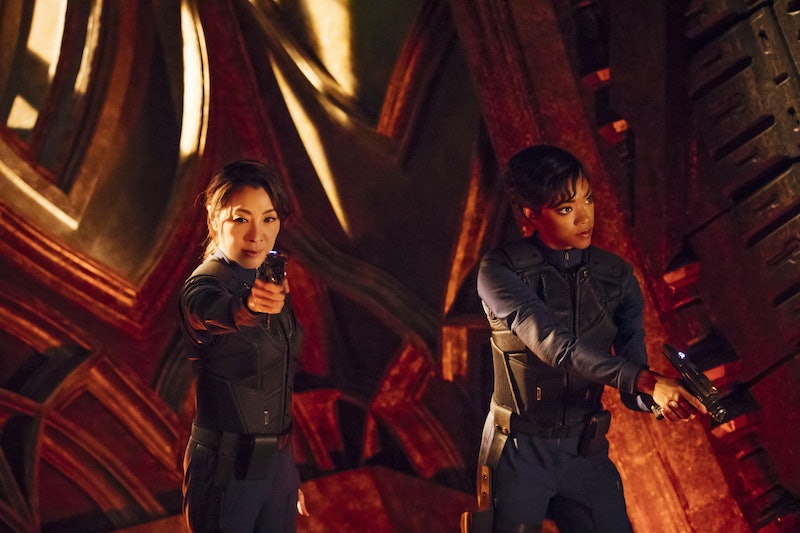 The new Star Trek spin-off passes the Bechdel test under a minute into the series premiere, and that's just some of the good news. Star Trek: Discovery premiered Sept. 24 and features the franchise's first black female lead played by The Walking Dead actor Sonequa Martin-Green, supported by a crew that's diverse in gender, race, and sexuality. And it's only right that that should be the case, because diversity has always been an essential part of Star Trek. (Spoilers for the two-hour premiere!)

The original series from the 1960s showcased a racially and culturally diverse crew working together in a way that was rather progressive for the era. Characters like Uhura and Sulu are now household names, and Nichelle Nichols and George Takei are cultural icons. Famously, the show featured the first ever interracial kiss on television. In the '80s and '90s, The Next Generation built on that foundation by adding a few more female characters. Later on, Voyager had a female captain and Deep Space Nine, a black captain. Star Trek takes place in an idealistic future in which many human conflicts have been eradicated, but it exists within a real world where that's far from the case. Diversity is integral to the fictional world itself, but can certainly have real world impact.

On Star Trek: Discovery, Michael Burnham (Martin-Green) is not yet a Starfleet Captain. She begins the series as a First Officer. However, she is indubitably the protagonist and the hero, and that is significant. Her mentor, Michelle Yeoh's character Captain Phillipa Georgiou, is a powerful woman in her own right as well. In the premiere episode, we are introduced to her crew on the U.S.S. Shenzhou, which includes a helmswoman named Keyla and an alien named Saru, There's basically just one white man — an ensign named Connor, who is already dead.

"The hallmark of Trek," said Martin-Green in an interview with Vulture, "is its diversity and how we champion each other."

Just watching Captain Georgiou and First Office Burnham, two women of color, working together as Starfleet officers is an emotional experience. Hearing a woman calling another woman "Number One" feels like a dream come true. Yeoh has all the gravitas of Patrick Stewart's Picard and Martin-Green's hero is like the perfect combination of Kirk and Spock that you never know you needed.

Michael is curious, smart, and brave. She also makes reckless decisions and bold mistakes for noble reasons. She is the type of complex female protagonist that should be all over television. She's way more than just a "strong woman" — she's just as flawed as any beloved hero.

It's unfortunately easy to anticipate fan criticism of a female character. She could be perceived as too bossy, too weak, too unlikable, or conversely, as a "Mary Sue" who's just too perfect. One of the ways that Star Trek: Discovery combats this is by having Michael face off with Georgiou. Watching two women debating diplomatic and military strategy is the type of visual storytelling that you don't realize you'd been missing until it is represented in front of you.

The Klingons, whose racial purism and supremacist goals are meant to evoke modern day, as showrunner Aaron Harberts told Entertainment Weekly, are also played by a diverse group of actors. That casting helps to make the Klingon conflict about an ideology rather having it serve as a direct metaphor for any particular human race, which would be naturally problematic.

All that said, the premiere acts as a sort of prologue to the series that will be and showcases just a taste of the actual crew. The U.S.S. Discovery hasn't even showed up yet, and with it comes more crew members. The characters played by Anthony Rapp, Rekha Sharma, Wilson Cruz, Mary Wiseman, and Shazad Latif (as well as Jason Isaacs) won't appear until the third episode or later. Rapp and Cruz will play one of the franchise's first gay couples, something that co-creator Bryan Fuller told Variety was essential to his vision for the series after he and other writers on Voyager received hate mail about a mere rumor that a character would have a same-sex relationship.

Sure, the various series that came before Discovery are not problem-free. Many sexist moments throughout the Trek franchise have been criticized, and some episodes have been taken to task for being culturally insensitive if not downright racist. There's always a learning curve when it comes to representation on television and dismantling systemic oppression, and even shows that attempt to be more progressive than their peers can stumble.

But the makeup of its cast shows that Star Trek: Discovery is picking up the mantle first carried by the various shows and films that have led up to it. This universe treats diversity as a fact, which is the very least that its fans deserve.