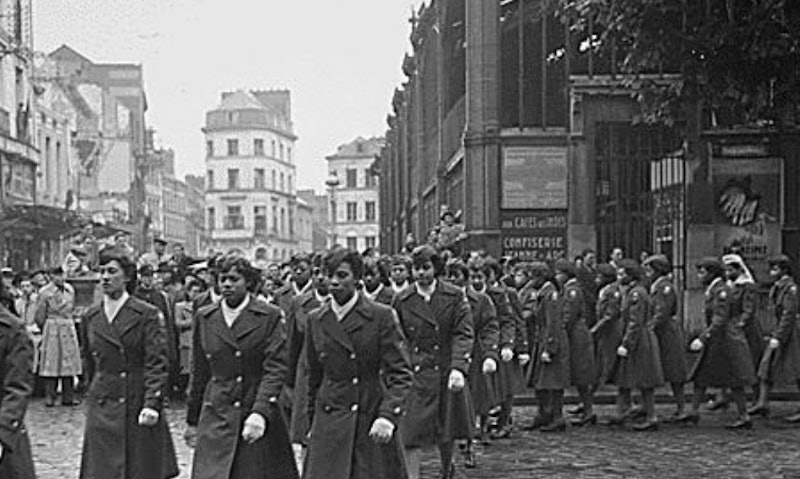 When a black-and-white image first appeared on author Kaia Alderson’s timeline, it triggered a bevy of questions while providing very few answers, like a photographic time capsule burst open, spilling forth with mystery.

The women in the photo were poised, regal, strong. They were uniformed, too, and the knee-length skirts and garrison hats perched atop perfectly coiffed hair provided the most revealing insight into their identities. Perhaps most significantly, the women were black.

A few Google searches later, Alderson discovered that the women in the picture were members of the 6888th Central Postal Directory Battalion, an all-female, all-black WWII military unit. Tasked with sorting and delivering mail sent to troops stationed throughout Europe, the Six Triple Eights, as they’re known, played an instrumental role in boosting soldier morale amid the agonies of war.

With each keystroke, Alderson unearthed one nugget of information after another, each one like catnip for the writer and self-professed “historical geek.” She read about the Battalion’s basic training in Fort Oglethorpe, Georgia; their first assignment in Birmingham, England; how they devised a system to work through three warehouses full of unsorted mail upon their arrival.

Because Alderson focuses her personal studies on black women during the first half of the 20th century, she was surprised that she’d never heard of the Six Triple Eights before, never came across them in previous research. Her reaction was immediate — she’d simply tell their story in her own words — and practical. If she hadn't been aware of the existence of these revolutionary black women, how many others were ignorant as well?

There’s certainly a market for books that reveal narratives from the past, and historical fiction has long been a stalwart seller of the broader women’s fiction genre. But despite the dozens of titles published, few center black characters. In military-themed books, the lack of diversity is even more startling, as the stories of black women have gone largely untold — even among the countless tellings and retellings of white women as spies, as nurses, as the pining betrothed of men shipped off to battle.

If she hadn't been aware of the existence of these revolutionary black women, how many others were ignorant as well?

(A note: This disparity persists in adult nonfiction, as well. To Serve My Country, To Serve My Race and One Woman’s Army, both chronicling the efforts of the 6888th Battalion, are the only widely-distributed books to focus entirely on the black female veteran experience.)

Tessa Woodward, the Executive Editor at William Morrow who acquires a variety of women’s fiction, has taken a keen interest in remedying this issue. “I was looking at my list, and I realized I had a lot of World War II stuff,” she says. “It was all selling well, but I was actually looking for a hole in the market. I googled ‘African American women in World War II,’ and I found a picture of these women, the 6888th Battalion.”

What followed was a sort of publishing meet-cute in August 2016: Woodward posted a link to a New York Times article on the death of Charity Adams Earley, the fearless leader of the Six Triple Eights. Woodward implored one of her followers to write a historical novel about the commander and her company; Alderson responded within minutes, mentioning that she was, in fact, working on a related project.

It took a couple years — long enough for Alderson to have a baby, beef up her word count, and sign with an agent — but her book Soldier Girls finally sold to William Morrow with publication slated for fall 2020.

To be clear, though, Alderson didn’t actually have a book when Woodward made the offer. She had an idea — 20,000 words, maybe — but certainly not the full manuscript that is required for authors seeking their first traditional book deal. Still, it was enough to show Woodward that she knew the women of the 6888th Battalion well and was fully-equipped to honor them on the page.

“I knew that I wanted this idea from the start,” Woodward says. “Normally, especially with historical fiction and with early career authors, we would want more chapters or as much of a proposal as possible. But I’m desperate for more of these stories and trying to find a way to get them.”

Writers may find it hard to reconcile Woodward’s hunger with the industry’s long history of exclusion; too many years of too few books by and about black women has certainly left many, including Alderson, wary.

“I thought I was going to be self-publishing a historical romance novella,” she says about her earliest iteration of Soldier Girls, the one she was writing before Woodward’s social media outreach. “I was like, ‘Who’s going to buy this? Nobody wants to read this.’”

Yet while Woodward’s perspective is individual and shouldn’t be held as representative of the entire industry, her acknowledgement of a supply issue — that is, the lack of diverse manuscripts she receives across all categories of women’s fiction — may well be indicative of larger trends.

So the question is: Who’s at fault for the dearth of #ownvoices, military-themed fiction? And, most importantly, who bears the onus of fixing it?

Ongoing distrust of the industry may deter writers of color from research-heavy historical fiction, a genre that is perhaps too labor intensive for those who aren’t certain their ideas will be accepted. However, in considering the volume of military-themed historical fiction that centers, and is written by, white women, the work is obviously approachable. The existence of both bestsellers and mid-listers in this category proves not just the size of the market and the space for creators of varying talent levels, but also the confidence that is often inherent in whiteness and the ease with which publishing has exploited this, while all but ignoring other groups.

Ongoing distrust of the industry may deter writers of color from research-heavy historical fiction, a genre that is perhaps too labor intensive for those who aren’t certain their ideas will be accepted.

But when deciding whether to hold publishers, writers, or even agents, accountable for the lack of books about black women in the military, there’s a critical factor that is often overlooked: The black female veteran experience itself.

Mary Tobin is a 2003 graduate of the United States Military Academy at West Point and a 10-year Army veteran who thrived within the military’s merit-based system, ultimately achieving the rank of Captain before retiring due to physical injury. But while Tobin was certainly successful during her military career, her black womanhood prompted discrimination that her victories couldn’t cloak. Now, when asked whether she’d do it again — West Point, the Army — she hesitates.

"The military is a microcosm of society," Tobin explains. "The military can serve as a blueprint for how to create a merit-based society. The problem is that it is a meritocracy with human beings, and [some of] the human beings are racist, sexist, and biased in other ways."

Indeed, even as we accomplish and acquire, the truth of being black in America — of being a black woman in America — brings a razor-sharp focus to daily life, filtering reality through trauma-colored glasses that, if not our own, were certainly inherited from generations before. This juxtaposition of beauty and struggle is often amplified by military service, and it complicates the sharing of those stories, often rendering black veterans altogether mute.

“A lot of our experiences [in the military] are very negative and filled with a lot of hurt and pain,” says Tobin. “There’s a black woman who I look up to as an icon, and when I asked her why she hasn’t written a book about her story, she told me that not enough of those who hurt her have died yet. I know that there are younger generations of black women who need to read her story, but she’s still dealing with trauma and pain, maybe even fear of reprisal if she tells the truth.”

This juxtaposition of beauty and struggle is often amplified by military service, and it complicates the sharing of those stories, often rendering black veterans altogether mute.

The silencing of black female veterans doesn’t just impact the numbers of manuscript submissions that editors like Woodward receive. It also means that writers like Alderson, who have a legitimate desire to share the stories of black women in the military, often have a difficult time finding research material for their work.

Richard Brookshire, co-founder of the Black Veteran’s Project is working to close this information gap. The organization’s mission is equal parts advocacy and archival; in addition to addressing the ongoing disparities faced by all blacks in the military, Brookshire wants to catalogue the stories of black vets, particularly those who, like Tobin, served more recently.

“Black history is American history, that’s first and foremost,” Brookshire says when asked about the importance of black veteran stories. “It’s been a little over 50 years since our first integrated war. Are we supposed to think that in 50 years, suddenly, every racial problem has been solved? The opposite is true, so why wouldn’t you be interested in these stories? And if you’re not, that needs to be interrogated as well.”

Meanwhile, Tobin believes we are in the midst of a cultural shift, a greater celebration of military service within the black community that, she hopes, will encourage more veterans to come forward and speak up.

While working on her debut novel, Beyond the Point, Claire Gibson interviewed Tobin to gain a better understanding of the black female experience at West Point. The book follows three women, one of whom is black, as they navigate the Academy before beginning their military careers. In speaking with Tobin, Gibson hoped to render her black character with nuance and authenticity.

Like Alderson’s moment of revelation after connecting with Woodward, Gibson’s interview process opened Tobin’s eyes to the level of interest in stories like her own. “Despite the negativity, there are black women in the military who are winning, and we need to see them winning,” she says.

Gibson, who is white, agrees. She also believes that for every book about the women of the 6888th Batallion, there should be a book about black women who served during the Vietnam War; who, like Tobin, fought in Iraq or Afghanistan; and even those who are currently in active duty.

“Despite the negativity, there are black women in the military who are winning, and we need to see them winning,” she says.

Indeed, the stories of black women in the service may be the most important and illuminating of all: According to a 2011 study by the Pew Research Center, black women enlist in the military at rates far higher than women of other races and account for nearly one-third of the military’s female population.

“It’s great that there’s such an interest in World War II-era stories,” Gibson says, “but black women are making incredible contributions in the military right now. We don’t need to wait 50 years to honor them.”