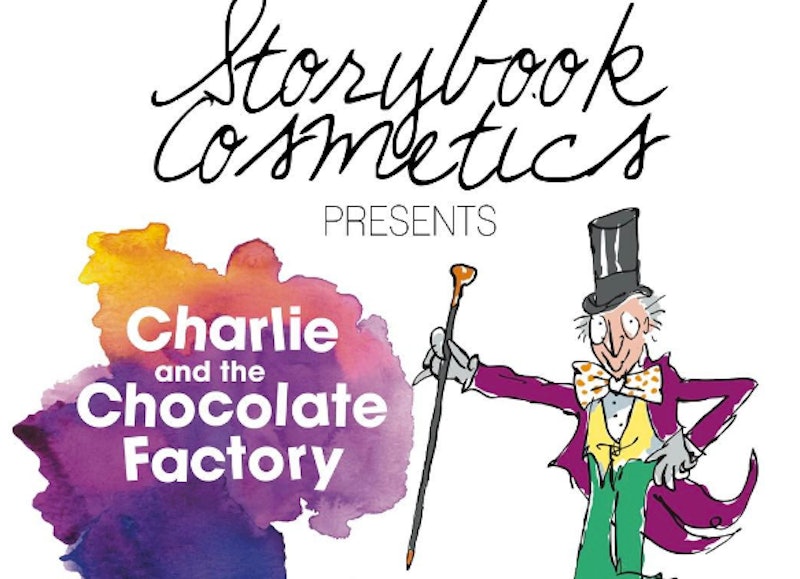 It's been a big year for Storybook Cosmetics. Just this month alone they've shared plans for their Rose Brush Set, a The Hunger Games collection, and their Witchcraft And Wizardry Palette. As if all of that wasn't already enough, Storybook Cosmetics' Charlie And The Chocolate Factory Palette is next on the list of makeup creations. Yes, you read that right. A 12-shade palette is in the works, and it's going to be great. Get ready for a whole batch of scrumdiddlyumptious shades, people!

When Storybook Cosmetics said that it would be a major year for their makeup brand, they weren't joking. The brand takes some of the best stories and turns them into makeup collections. So it only makes sense that Charlie And The Chocolate Factory is up next. According to the press release, there will be 12 different shades in the palette, ranging from mattes and metallic to pearl finishes.

All of the shades will be cruelty-free and made in the USA as well, so every makeup fan can get in on the fun. Something tells me that the shades will be good enough to eat, although I wouldn't recommend it. The colors and names haven't yet been released, but this is still pretty exciting news.

“My sisters and I have been huge fans of the legendary Ronald Dahl works since we were little kids. We guarantee that this palette will do the iconic story justice!", said Missy Maynard, co-founder of Storybook Cosmetics, in a press release.

The Charlie And The Chocolate Factory palette will be made to look like hard-backed book. It's similar to their soon-to-launch Wizard And Witchcraft Palette that looks the same. Their Wonka-inspired shadows are set to launch sometime in the Summer of this year, although the exact date has yet to be released.

I love that the brand focuses on childhood stories. If the Charlie And The Chocolate Factory is just as great as their previous launches, then it's definitely something to look out for. Fans are already excited about the big launch too.

The emojis are my exact reaction.

Let's just hope they share a prototype soon, to tide fans over until the summer.