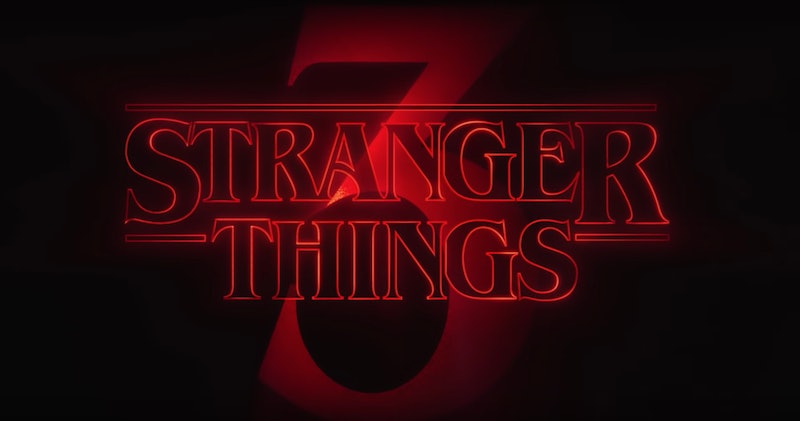 Netflix gave fans of Stranger Things another glimpse into the show's upcoming season on Sunday, releasing an ominous new trailer showcasing the names of next year's episodes. The Stranger Things Season 3 episode titles offer just enough information to leave fans even more eager for the show's return, especially because the finale's title hints at a battle of epic proportions.

Sunday's trailer features the names of each of the season's episodes appearing on screen one by one, as haunting instrumental music plays in the background. The trailer reveals that the season's eight episodes have the following titles: “Suzie, Do You Copy?,” “The Mall Rats,” “The Case of the Missing Lifeguard,” “The Sauna Test,” “The Source,” “The Birthday,” “The Bite,” and “The Battle of Starcourt.” After flashing the episodes' names across the screen, the trailer wraps up with a simple line alluding to what awaits fans next year. "In the summer of 1985, the adventure continues."

As TVLine reported, Sunday's preview constitutes the second trailer Netflix has released showcasing Stranger Things' upcoming third season. The original trailer appeared in July and was a feature for the fictional "Starcourt Mall" — one that was full of 1980s culture references. Notably, Starcourt Mall is also mentioned in Sunday's trailer, seemingly as the location for the season finale's battle.

Aesthetically it's [the season's] going to feel very different ... Everyone is going to this new mall, seeing movies, and, of course, the Hawkins pool is open for business. I think there'll be a sense of fun and joy.

However, Duffer also hinted that there will be an especially dark side to Season 3 as well, explaining that the season is somewhat influenced by The Thing, a well-known science fiction story about a parasitic extraterrestrial being. Duffer ruminated on The Thing's influence on the show's forthcoming season — and on the influence of other horror film directors — in the aforementioned book (as reported by Digital Spy):

While it's our most fun season, it also turns out to be our grossest season ... We're inspired by John Carpenter's The Thing. We're inspired by Cronenberg. We have a little bit of a George Romero vibe in there as well. There are horror movies and horror masters that we haven't really paid tribute to as much in previous seasons that we are definitely going to get into this season.

Stranger Things fans have a lot to look forward to in Season 3, as the series' latest trailer reveals. Though, unfortunately, they still have to wait awhile to tune in to these new episodes. Netflix revealed back in July that the series won't make its 2019 debut until summertime. Cindy Holland, Netflix's VP of Original Series, explained to Entertainment Tonight that the show's producers want to take time to ensure that Season 3's episodes meet their high expectations. "It’s a hand crafted show. The Duffer Brothers and Shawn Levy have worked really hard," she said. "They understand the stakes are high. They want to deliver something bigger and better."