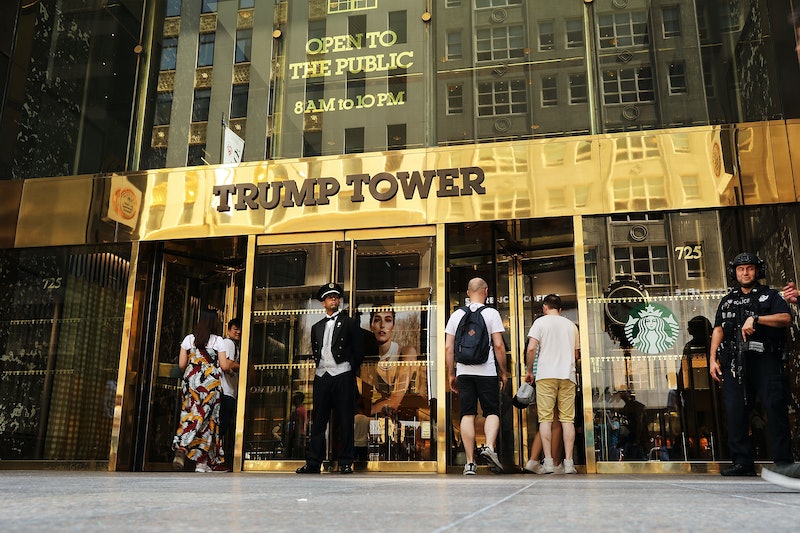 The Trump Tower in New York City has often been a site of protest during the Trump era. Many demonstrations of dissent have been on the serious side, but one recent example is hilariously tongue-in-cheek. A MoveOn petition that's gaining traction this week would rename NYC's Trump Tower block after former President Obama.

The petition, which is addressed to the New York City Council and Mayor Bill de Blasio, calls for renaming the stretch on Fifth Avenue that lies between 56th and 57th Sts. "President Barack H. Obama Avenue." That block holds Trump Tower as well as the flagship stores of Tiffany & Co and Gucci. As of Friday afternoon, the petition had more than 8,500 signatures.

"The City of Los Angeles recently honored former President Barack Obama by renaming a stretch of the 134 Freeway near Downtown LA in his honor," the petition description notes. "We request the New York City Mayor and City Council do the same by renaming a block of Fifth Avenue after the former president who saved our nation from the Great Recession, achieved too many other accomplishments to list, and whose two terms in office were completely scandal free."

The Hill points out that Trump's 2020 campaign headquarters will reside on the 15th floor of the building — so if the avenue were renamed, he'd need to have his campaign correspondence addressed to 725 President Barack H. Obama Avenue. He would also be forced to direct his Trump Organization mail there.

Unfortunately for the president's critics, it will not currently be possible to rename that block after Obama. As the New York Historical Society's Nina Nazionale explained in a 2012 informational video, the process of renaming a street is lengthy and requires approval from a long list of parties.

More importantly, in this case, the namesake must be dead. Obviously, Obama is very much alive. The New York City Council, which has to authorize any street name changes, sent Bustle a statement confirming this portion of the rule. Breeana Mulligan, the NYC council spokesperson, says:

Former President Barack Obama’s incredible work ethic, his dedication to the public good, and his scandal-free presidency set the bar for all the presidents who follow him. It is the practice of the City Council to only consider ceremonial co-names for individuals who are deceased, and we wish the former president a long, happy and productive life.

According to Nazionale, another prerequisite is that "the honoree had a significant contribution to the community." While Obama clearly impacted the entire United States, it's more difficult to argue that he has a particular connection to that block (although he did grab coffee about two miles further down the avenue in 2017).

If the prerequisites for renaming a street are met, the real work begins. "A petition must be signed by at least 75 percent of the local residents and given to the community board for approval," Nazionale explains. Next, "the proposition goes to the Parks Committee of the city council, and, if approved there, the entire city council votes." There's one last step: "The mayor has the option to either approve the name or veto it."

The Mayor's Office declined to comment. Bustle has also reached out to Community Board 5, which would also have to approve a name change on that block.

The MoveOn petition was started by Elizabeth Rowin, according to The Hill. And based on the existing rules for street name changes, who knows — there might just be a petition to change that in the future, too.