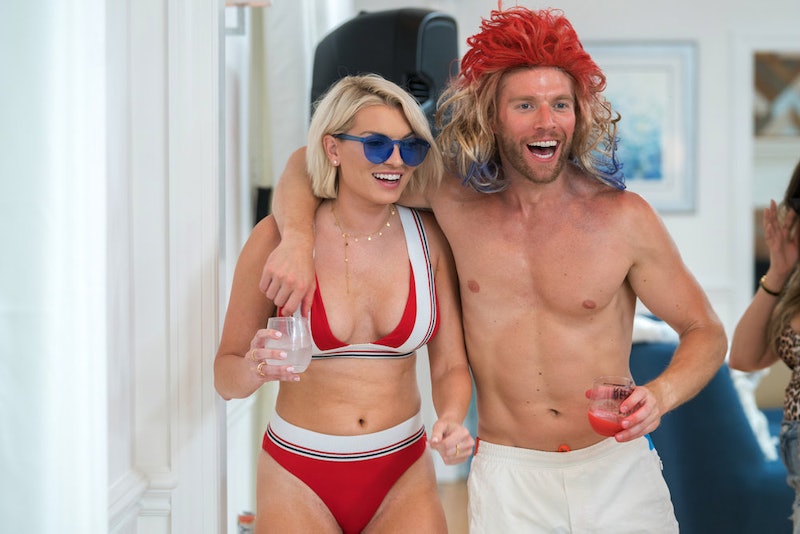 Four summers, multiple casting changes, and countless frosé-fueled hookups later, and the Summer House crew hasn't changed a bit. Since its boozy backdoor pilot premiered on Vanderpump Rules in 2017, fans have reveled in watching the devolution of any given night the cast spends partying in the Hamptons: They may start the day classy with catered clam bakes and champagne brunches, but chances are they'll end up crying on a unicorn float in the pool in the wee hours of the morning.

The Summer House cast has grown up ever so slightly in Season 4, which premieres Feb. 5 on Bravo; Kyle Cooke and Amanda Batula are engaged, everyone is finally secure in their careers, and no one bickers over small things like bedrooms anymore. But don't be fooled — their party game is still strong and, according to Paige DeSorbo, there's still only one member of the group who actually knows how to chop a vegetable. (Sadly, we're pretty sure she's not exaggerating.)

Read on to find out who this culinary master is as Kyle, Paige, Amanda, Lindsay Hubbard, Carl Radke, Hannah Berner, and new cast members Luke Gulbranson and Jules Daoud discuss their favorite hookup spots, fail-proof hangover cures, and more in our 21 questions below.

1. What’s one word to sum up this season?

Paige: I would say Amanda is the mom of the house because she does all the cooking and food ordering. She basically takes care of all of us.

Amanda: Definitely me. I’m always trying to make sure everyone has eaten before a big day of drinking, that we have enough food and that everyone is getting ready on time even though I’m usually the last one down the stairs.

Kyle: Combination of me when I'm sober and Amanda when I'm not. We are the all encompassing Summer House mother hen.

3. Who’s the next Bravolebrity you want to invite to the house?

Lindsay: Lisa Rinna! I think she would definitely be able to keep up with our crew!

Hannah: I vote all the hot shirtless deckhands with cute accents from Below Deck!

Luke: Top Chef — so they can make us hangover food!

4. What Bravo show should the Summer House cast crash?

Hannah: I'd love to crash Southern Charm because I love grits.

5. Now that the pantry has been taken, what’s the go-to secret makeout spot?

Amanda: There is no safe place in the house. We did find a hidden bench in the woods this summer, which could be the new spot.

Hannah: Apparently, me and Paige's bathroom, because every party we catch someone in there.

Jules: Nothing is a secret spot in the Summer House!

6. Who is the one cast member you never want to share a room with and why?

Paige: I think Hannah and I are the messiest, so no one probably wants to room with us. But I would have to say Kyle because that would be weird and he sleeps with his shoes on.

Hannah: Kyle because he "doesn't take naps" and that's the only way I survive.

Kyle: Hannah — she is the messiest!

7. Who cries the most this season?

Kyle: Pretty sure I cried the most in Season 3 hands down; I was an emotional wreck. This season is a total toss up but I want to say Carl.

Lindsay: It honestly might have been me who cried the most this season. I went through a lot of emotional rollercoasters.

Lindsay: She's the only one who knows how to chop vegetables!

Paige: I would say Hannah is the worst because she only knows how to microwave things.

Jules: The worst might be Hannah, but I don't even think she cooks.

10. Who in the cast has hooked up with the most Bravolebrities?

11. Who takes the longest to get ready to go out at night?

Kyle: Probably me. I'm usually the last one partying, pre-gaming, or cleaning, and then I always need to shower. Do you think my hair just winds up looking this good?

Hannah: We are all surprisingly fast, but I'm going to say Kyle because he has a whole routine where he has to listen to EDM music and shower and do his hair and run around without a shirt on.

12. Which Summer House alum would you bring back, even for a weekend?

Hannah: Everett, because even after all this time he is still hilarious and would cause drama.

Lindsay: Jaclyn! We got really close during Season 1, and we've remained great friends over the past four years.

Kyle: Stephen McGee. We bumped into each other two weeks ago and for the first time since the [Season 2] reunion... had a cordial conversation.

13. What’s one thing you pack that you just can’t live without each summer?

Paige: Face masks! I need to try and get a little zen and calm where I can with my crazy roommates.

Amanda: Dry shampoo! I like to soak up as much sun as possible or hang out with everyone till the last minute that I don’t have time to always wash my hair. Plus, my hair looks better a day old anyway.

Hannah: Paige taught me to put my head in a bowl of water and ice and it really shocks the system in the best worst way!

Amanda: Pool, sun, and rosé. My favorite thing to do is wake up, throw on my suit, jump into the water and then soak up the sun while one of my housemates pours a few glasses of rosé.

Jules: Hair of the dog, always.

15. What are three words to describe the house on a Sunday morning?

16. What’s the one thing everyone should do in the Hamptons?

Carl: Do a clam bake on the beach.

Kyle: Rent a party bus and hit up a few vineyards. It will never get old and is picturesque.

Amanda: I love doing dinner at Southampton Social Club and then hanging in the backyard while they turn the dining area into an epic dance floor.

Paige: OH MY GOD we need a dog! But we should probably get a fish because it’s the only thing we could handle.

Kyle: Chia Pet... we need to learn to take responsibility and I'm not sure we can handle anything other than watering some seeds.

Jules: A snake for all the snakes!

Amanda: We could have really used a therapy dog last summer.

18. If there was ever a spinoff, where do you think it should be set?

Paige: Nothing can beat the Hamptons but I think Cape Cod or Martha’s Vineyard has the same vibe.

Lindsay: Winter House in Aspen or somewhere in the Catskills.

Luke: At my lake house in Minnesota.

19. Have your parents seen the show? What do they think of it?

Paige: My parents love the show! I think my dad chose not to watch some pantry scenes.

Lindsay: My dad watched Season 1, and then when he went to watch Season 2, Episode 1, he said that within the first five minutes my top was off and he couldn't get to the remote fast enough to turn it off! I have also strongly suggested that he not watch this season at all!

Kyle: Yes. They are highly embarrassed but also proud. Story of my life.

Amanda: My dad refuses to watch. Mostly because he doesn’t watch reality TV. But my mom, aunts, uncles, and cousins all watch. They love it!

20. Besides booze, what’s the key to a good party?

Amanda: FOOD! The people need to eat. Kyle may say music, which is true, but you can’t keep the people partying without fueling them with my guac and chips.

21. Who’s the biggest flirt in the house?

Paige: I would say Carl, he knows how to give a good compliment.

Luke: I would say Hannah and I go pretty neck and neck.

Amanda: Carl! Runner up would be Hannah.

Paige: I love watching back episodes of Hannah and I laying in bed. Our friendship is so close and watching when we wake up and recap the night before is my favorite. Amanda and Kyle's engagement was also amazing!

Hannah: When I stayed home and ate everyone's pizza.

Luke: Probably when Carl falls in the pool every season.

Interviews were lightly edited and condensed for clarity.

More like this
Is Salley Actually Going To Be On 'Bachelor In Paradise'?
By Kadin Burnett
What Happened With Justin & Salley Pre-'BiP'? They Fueled Rumors At Stagecoach
By Grace Wehniainen
Tyra Banks Flubbed The Name Of Charli D’Amelio’s Boyfriend On 'DWTS' Bond Night
By Jake Viswanath
Are Michael & Sierra Still Together After Bachelor In Paradise?
By Kadin Burnett
Get Even More From Bustle — Sign Up For The Newsletter