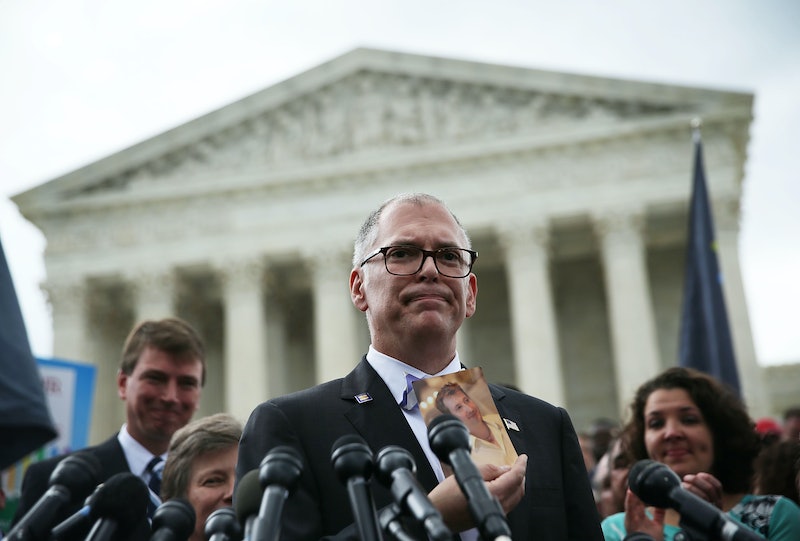 Despite the fact that there had been rumors it was coming for weeks, Donald Trump’s withdrawal of federal protections for trans students in public schools who want to use the bathroom of their gender identity set the internet aflame on Wednesday. But the fact that this debate over trans rights is being fought through federal guidelines, state bills, and the media is totally backwards. Fortunately, the Supreme Court is addressing the issue of “bathroom bills” in a case that will be heard in late March — but really, they could have already put this question to bed.

The highest court in the land is scheduled to hear G.G. v. Gloucester County School Board on March 28. The case concerns bathroom policies for transgender students in a Virginia school district, and it appears to be coming just in the nick of time. The back-and-forth between Obama’s guidelines and Trump’s retreat is leaving trans students in limbo regarding their rights. If nothing else, I believe these students deserve some clarity.

If the court remains split evenly with eight justices, it is likely that the lower court’s ruling — that Title IX protects the rights of transgender students to use the bathroom consistent with their gender identity — will stand. However, if Trump’s nominee to fill the late Antonin Scalia’s seat goes through in time, all eyes will likely fall on Justice Anthony Kennedy, who has been the swing vote in many pivotal cases, including the case that guaranteed same-sex couples the right to marry.

Though there was much excitement and celebration following the Obergefell decision — the 2015 case which guaranteed the right to marry to same-sex couples as a Constitutional right— there were some of us who felt that the decision should have gone farther. Several people pointed out that though the decision permitted any gay or lesbian couple to marry on a Saturday, they could still get fired for having gotten married when they showed up at work on Monday, since federal employment discrimination statutes don’t take sexual orientation into consideration.

But the Obergefell decision, which was authored by Kennedy, carefully avoids prohibiting discrimination writ large against LGBTQ people — it only addresses it in the case of marriage. As Lauren Goldes observed last year in the blog OnLabor, “Unlike the right to interracial marriage, which the Supreme Court upheld after Congress banned race discrimination, gay marriage came with no such analog.”

Kennedy was certainly treading cautiously in Obergefell. Even if his prose on same-sex marriage was quite moving (and I certainly found it to be), in avoiding the wider question of the rights of LGBTQ people, the Supreme Court allowed space for Trump to put the rights of transgender Americans in doubt.

However, I’m hopeful that the court generally — and Kennedy specifically — will protect the rights of their transgender students to choose their gender identity (and their bathroom) without the interference of school administrators when G.G. v. Gloucester is argued in March.