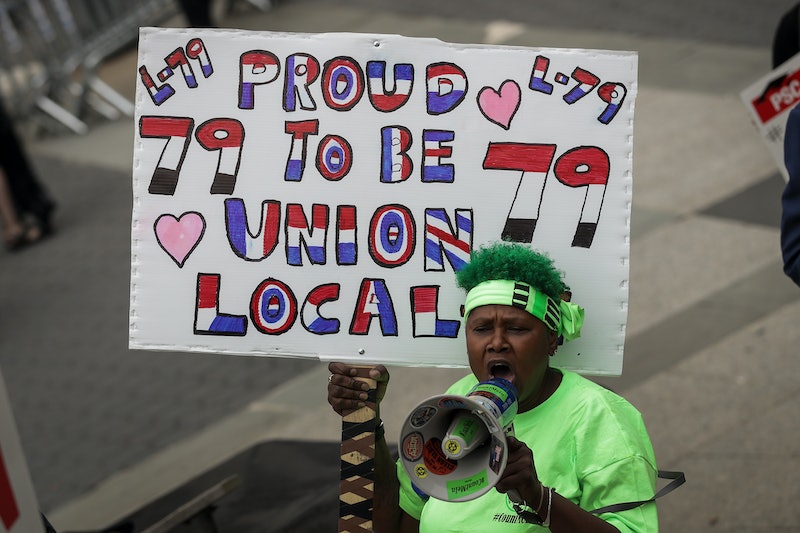 On Wednesday, the Supreme Court handed down a ruling that has the potential to cut down union membership in the public sector. While this could prove a major blow to organized labor as a whole, some experts believe Janus v. AFSCME will disproportionately and negatively affect women of color in the workforce.

"In this system of Racialized Capitalism, women — particularly women of color — are intentionally pushed to the bottom, "Angela Peoples, an ACRE campaign director, tells Bustle. "We know collectively organizing for things like paid family and sick leave, and better wages and benefits are all things that are desperately needed by women of color. The Supreme Court just made those fights harder, but not impossible."

How the ruling made the fight more difficult is largely economic. Generally, if a person takes a union job, that person is required to hand over a small portion of their pay to the union that represents them. These are called union dues, and they fund things like union legal representation, supporting pro-union political candidates, and — if needed — strikes. They essentially give unions the financial backing to protect and fight for fair wages, maternity leave, sick leave, and just about every union-backed benefit.

In most cases, if a person opts not to join the union, they are still required to pay a small part of those dues, called an agency fee. This is because those workers still benefit from the contract negotiations for pay and benefits that the union fights for. Janus v. AFSCME ruled that public sector, union-eligible employees who opt out of joining their bargaining unit cannot be compelled to pay those agency fees. This deals a blow to unions because it provides less of an incentive to join and therefore commit a portion of a person's paycheck.

While Janus v. AFSCME currently only applies to public sector positions, it opens the door for future rulings to expand the policy to other sectors.

"Unions have been the single biggest driving force to help low-wage workers, people of color, and especially women, lift themselves out of poverty," 32BJ SEIU President Hector Figueroa tells Bustle.

At airports, fast food restaurants, schools and hospitals across the country, Black and Latina women have been on the front lines of the growing movement to demand living wages and strong unions. Women of color are the backbones of their families and their communities. Taking away their good union jobs could have a ripple effect that could hurt countless others.

The benefits that unions provide enable workers to live less stressful lives. They tend to make more money than their non-union counterparts and have greater access to benefits. They can also contribute to job security and provide a sense of community among workers. Those things can be especially essential for women of color, who are at a much higher risk of experiencing poverty and wage discrimination.

“There’s nobody who's more aware of how badly rigged this economy is than women of color workers," Jennifer Epps-Addison, co-executive director for The Center for Popular Democracy, tells Bustle. "We can see it in the industries that they’re concentrated in, whether its service or hospitality or health care."

Like Figueroa, Epps-Addison underscores that working women of color are routinely at the frontline when it comes to fighting for workers' rights. "We don’t have to convince them of anything," she says.

Charnel Brownlee, a school bus driver for the Philadelphia School District and an 32BJ SEIU member, tells Bustle that she and her fellow union members do not plan to back down because of Wednesday's ruling.

"Black women have organized unions to demand fair treatment and the pay we deserve," Brownlee says. "I refuse to accept this decision as anything other than an attempt to take away my union so they can steal our voices and pay us whatever they want."

Above all else, Brownlee explains, union membership has changed the way that communities function, for the better.

“We know how the union has benefitted us and our families," she says. "We’ve been able to support our communities because of our good union jobs. This decision will not deter us."