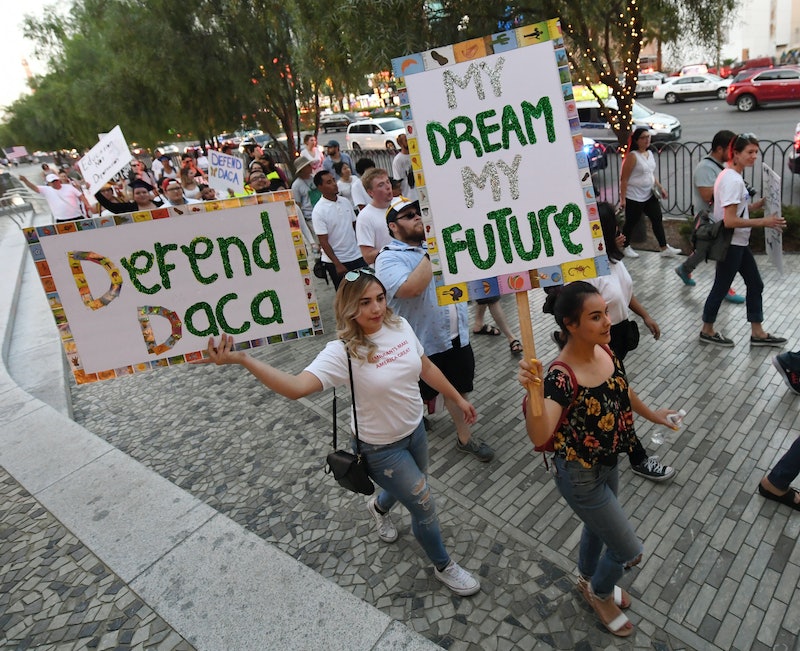 The Supreme Court rejected a Trump administration appeal on Monday surrounding the decision to end the Deferred Action for Childhood Arrivals program (DACA), which gave some protections to undocumented immigrants brought to the U.S. as children. The court unanimously chose not to speed up the legal battle, and that's not good news for the president. But the Supreme Court's DACA decision isn't necessarily good news for Dreamers, either.

Earlier this year, federal judges ordered the Trump administration to allow Dreamers to renew their legal status while the president's choice to eliminate DACA altogether was challenged in court. Basically, the Justice Department asked the Supreme Court to weigh in on the case before it took the usual path through appeals courts. However, all nine justices agreed on Monday that the government's DACA case needs to go through appeals first.

Monday's decision didn't clarify the fate of DACA, but it did protect Dreamers for at least a couple more months. The Trump administration previously said that it would keep DACA in place while the legal battle played out.

"Until further notice … the DACA policy will be operated on the terms in place before it was rescinded," a U.S. Citizenship and Immigration Services spokesperson told the Los Angeles Times in January.

On the surface, the case being held up in court is good news: It allows Dreamers to continue applying to renew their DACA protections for two more years. It could be months before a federal appeals court delivers a ruling on the case, giving more Dreamers time to apply for renewal. However, it leaves those same Dreamers in limbo, unsure if they'll be able to legally live and work in the U.S. when their renewal expires; it's still a waiting game to find out what happens long-term.

In the meantime, undocumented immigrants who've never had DACA protections aren't able to apply, including those just turning 15 (the age at which one can apply) and those who didn't have the nearly $500 needed to submit their application.

When Trump announced the end of DACA in September, he set March 5 as the deadline for its elimination if Congress failed to pass legislation replacing the program. The government initially stopped accepting applications for renewal after the announcement, but began allowing Dreamers to apply for 2-year extensions after the court orders.

SCOTUS' decision not to rule on the case right away also gave Congress more time to come up with a solution. If the Supreme Court had agreed to hear the case and struck down the previous court orders, lawmakers would be faced with finding a solution before the March 5 deadline. In that scenario, it's estimated that 425 immigrants would lose protections every day in the month of March. That number is expected to rise to 1,000 per day come August.

Last month, the Senate voted down a measure backed by President Trump that would have created a path to citizenship for Dreamers and allocated $25 billion for a wall along the U.S.-Mexico border. Since then, no real progress has been made toward finding a bipartisan solution. While Congress tries to figure it out, Dreamers don't know how long they'll be able to stay in the country. As Vox's Dara Lind explained:

Hundreds of thousands of immigrants have been in a state of uncertainty and anxiety since September 2017 — and even earlier, as DACA recipients wondered what President Trump would do to them. Congress still has the power to alleviate that uncertainty. But if it couldn't do so without the impetus of a deadline, it may feel even less urgency without one.

Just as the legal limbo gives Dreamers more time to apply for two-year renewals, it simultaneously gives Congress an extension. More time comes with more uncertainty for Dreamers, though.