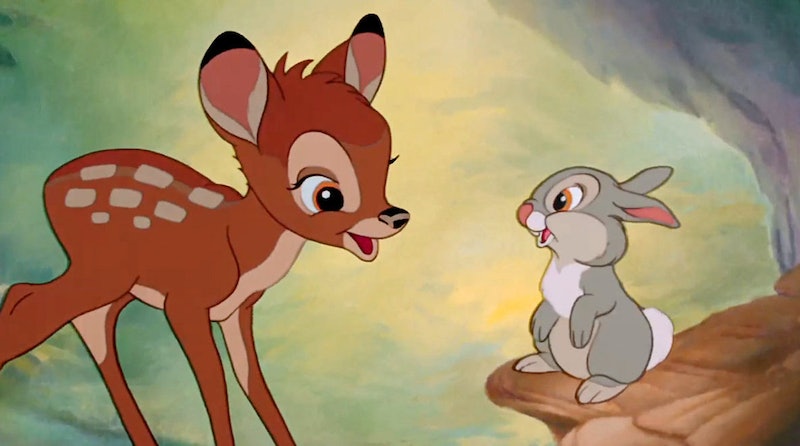 Who would have thought that an animated movie about a talking deer and his woodland friends would have caused Walt Disney to make a few enemies? To hear Donnie Dunagan and Peter Behn, the voices of Bambi and Thumper, respectively, tell it, the famed filmmaker actually endured a bit of hate mail after Bambi's release in 1942 due to its message of environmental protection.

Dunagan and Behn were only children back when they provided voice overs for the main roles in the film, but they still remember the reaction that Disney got after the film's release like it was yesterday. The men reminisced about overhearing the gossip about Disney receiving angry letters when they spoke to Bustle and other reporters while touring Disney's Burbank offices to celebrate Bambi's in-home release and addition to the Walt Disney Signature Collection. (The rerelease hits Digital HD and Disney Movies Anywhere on May 23 and on Blu-ray, DVD and On-Demand on June 6.)

"Mr. Disney's fire scene was probably the first environmental suggestion in a major film in America," Dunagan says passionately, hitting his hand on the table in front of him. "It took some courage to do that. That's fact. I can remember adults talking after the release that Mr. Disney got bad mail and some heat over that environmental scene."

He continues, "The imagination doesn't have to work too hard about thinking of some family up in Montana where the grandpa is going out to deer hunt to feed the family. Now there's nothing amoral about that during the Depression, but [imagine] some granddaughter saying to grandpa, 'Papa, you can't go out, you're going to shoot Bambi.' So he got some heat over that."

But the film obviously had a much bigger impact than that. Dunagan, wearing a gold belt buckle with an image of Bambi on it, could hardly wait to show off a packet of hand drawn and written letters from fans that he's received over the years. He tears up while going through them.

"Five years ago, nine years ago, last week, we still get these kinds of [letters] from children all over," he says. "Show me another film anywhere, in any country that has that kind of presence, that kind of influence, particularly on children."

Behn is especially proud of Disney's forward thinking in advocating for the environment before most people realized that the world needed it.

"The Bambi movie makes a very strong environmental statement which becomes more meaningful as the years go on and we get more and more worried about what's happening to the planet," he says, sitting next to Dunagan underneath pictures of Bambi and Thumper. "When you think back about it, in the 1930s Walt Disney was incredibly ahead of his time in terms of being aware that there was a need to look after our planet. The movie is just a very strong statement — and I think that will continue hopefully for a long time. Even back then, man was the problem – the enemy. That fire scene and killing Bambi's mother, it just didn't put man in a very good position."

Behn later jokes with a little laugh, "I would venture to say that the NRA is not very proud with our little film."

Both Dunagan (who left the entertainment industry shortly after making Bambi to join the Marines) and Behn (who builds "green" energy efficient homes in Park City) fondly remember Disney as a hands-on boss.

"If you didn't know who he was, getting around and getting stuff done [on set], you'd think that somebody just hired him and he was trying to impress somebody," Dunagan says with a laugh. "He was busy. Mr. Disney led by example. He didn't lead by memoranda or in a fancy suit where everyone was afraid of him."

But Dunagan's most cherished memory is how, after seeing a deer for the first time in a zoo during production of Bambi, he complained that deers were boring. Word got back to Disney, and he approached his young star later.

"He told me, 'Don't worry, our Bambi will not be boring,'" Dunagan remembers.