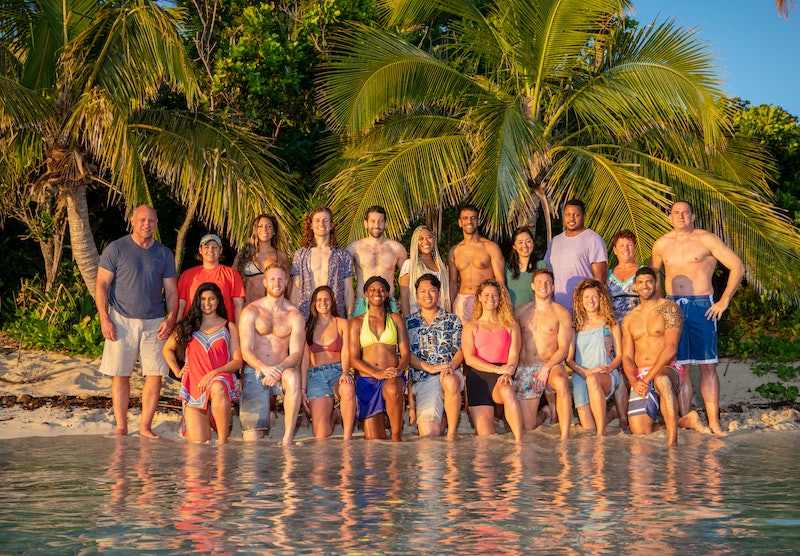 It's time for more strategizing, alliance-making, and limit-testing challenges, because Survivor Season 39 has a new cast of people vying to win that million dollar prize. The new season begins Sept. 25, and it has a fun twist in store for both the players and the viewers. This season's subtitle isn't "Island of the Idols" for nothing, because two former players are returning as mentors.

According to Entertainment Weekly, the two mentors will not actually be competing, but they will be available to lend advice about anything from building a basic shelter to making good strategy moves and playing a strong social game. So while the contestants will have to do some learning on their own just like everyone before them, they also have a huge advantage. Get to know the 20 lucky contestants below.

According to his CBS bio, this gym owner enjoys "lifting, traveling, and outdoor activities," so he was basically made for Survivor. He also knows that his physicality makes him a threat on the show, so he's going to try to have a strong social game too.

After applying for Survivor for the last five years, Chelsea finally got cast. Expect her to make Larry David and Curb Your Enthusiasm references on the show because her bio alone has three mentions of them alone.

At 48, Dan is one of the older contestants on the show, but he's not letting anything hold him back. "I think I have the basic, if not superior, physicality to be useful to the Tribe," Dan told CBS of his strengths.

This Kentucky native loves to fish, boat, and four-wheel, so she's used to the outdoors. Her pet peeve is guys who think women aren't their equals, so if anyone underestimates her, it could lead to conflict in the season.

Elizabeth is an Olympic swimmer, but she's not telling her fellow competitors that so they don't see her as a threat. They probably would find it intimidating that she was the youngest U.S. Olympic Team member in 2008 at just 15 years old.

Jack seems like the Tyler Crispen (from Big Brother) of Survivor. "Externally, I can easily be perceived as a laid back, longhaired, ditzy guy," he said in his bio. "In reality, I can be quite intellectual, intentional, and LOVE having serious, deep conversations with people."

Tyler nearly won his BB season by riding his "chill surfer guy" vibe all the way to the Final 2, when he was really making big moves behind the scenes. Maybe Jack will follow a similar strategy.

Jamal said that he's studied the game of Survivor and thinks he has what it takes to win — namely that he plans on making the other contestants like him so much, they'll want to keep him around.

Jason is a lawyer from New York and a self-professed "leader" who is "resilient" and "hard-working." All very important traits on the island.

Karishma is the same type of lawyer (personal injury) that Jason is, so maybe they'll be able to bond over that. Overall, she sounds like a smart, resilient player determined to make it to the end of the game.

"I've always craved challenges that help me learn more about myself, and I know deep down that I do have the physical, mental, and social skills to outlast, outwit, and outplay anyone," she said in her bio. "My job and my life experiences have trained me exactly how to win. I am hungry to be out in the wild, pushing myself to the edge, and doing things I never dreamed I could do. In the end, surviving this game means something more valuable than money to me."

Harvard soccer star Kellee thinks she'll be successful on Survivor because, "My pain tolerance is high, and I love to make difficult things fun."

Lauren said that her hobbies include, "Eating an entire bag of Hot Cheetos in one sitting while [marathoning] true crime shows" and laughing at her own jokes, so she's already the most relatable contestant. She also said she does a great Britney Spears impression, so here's hoping she'll do it on the show.

The 24-year-old is an Air Force Veteran and describes herself as "Relentless, clever, and decently dope." She also said she has to win Survivor for Beyoncé, because she "wrote a song about surviving," and Missy wants to honor that.

There's a lot of lawyers on this season. Well, Molly is a law student, but close enough. The 27-year-old said she loves "Running, skiing, biking, [and] hiking," so here's hoping she also like camping in a hut on an island for days at a time. She said she wants to win so she can go to law school without going into debt.

Noura is an entrepreneur who thinks her best chance at winning is that she's a well-rounded competitor. "I'm the nerd, jock, and model with brains, brawn, and beauty," she said. "Most importantly, I have the social skills needed to both win and influence people, and relentless drive to go after what I want."

Ronnie is a professional poker player, which means he definitely knows how to read people — and prevent others from reading him. That should give him a big advantage in the season.

"Poker is such a great challenge and competition and I want to always challenge myself to do better and better," Ronnie said of how his job will translate onto the show. "There is no greater challenge in life than Survivor, I must conquer it."

Tom is a 60 year old former NHL player who's giving Survivor a shot in his retirement. He played for the New York Rangers, Los Angeles Kings, and Phoenix Roadrunners throughout his career.

Tommy is a fourth grade teacher and he's ready to win Survivor. "I am there to win the game and get the million dollars. Those are my only motivations," he said.

Vince's bio says he's the child of two refugees and that he's so grateful for the life they've given him in America. "My father's journey was especially harrowing," Vince said. "He, Txooj Zeb Muas, is my hero and quite literally, a true survivor."

Dean works in tech sales, which he thinks will allow him to sell himself as a good ally and pull strings within those alliances. He plans to have a self-aware social game and also bring home challenge wins with his physicality and puzzle skills.

At 59, Janet is a Chief Lifeguard in Florida, which gives her a leg up on any of her competitors who don't spend as much time around water as she does.