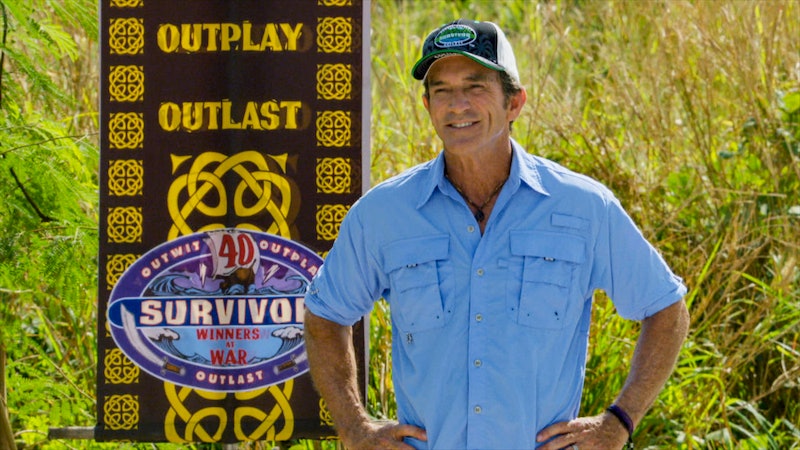 As Survivor Season 40 wraps up with a remote, online reunion, fans aren't yet able to look forward to when Survivor Season 41 will premiere, because filming has been delayed, per Deadline. The show was already renewed through Season 42, and both Seasons 41 and 42 were slated to film in the spring and summer of 2020. But the current state of the world and the coronavirus pandemic has impacted production.

According to Entertainment Weekly, filming for Season 41 was set to begin in the Mamanuca Islands in Fiji on March 24. In early March, that production date was pushed to May 19. "Our crew numbers over 400 and are flying in from over 20 different countries, creating a need for more time to fully analyze and create our new production safety plan," host Jeff Probst said in a statement, per EW. "Subject to new information, our new planned start date for production would be on or about May 19th, 2020. Our intention is to still to shoot both seasons 41 and 42."

That was two months ago, and this virus has shown little sign of slowing its spread, making the May 19 shoot date unlikely. Further delays on Season 41 will also impact Season 42, which was originally supposed to begin filming on May 24, per EW. Typically, Survivor airs two seasons every year in February and September. Season 41 was originally supposed to return in late September 2020 and Season 42 would premiere in February 2021. Both of those dates could be moved if production is delayed much longer.

The cast has been solidified for Season 41 already, since filming was due to begin months ago. But the casting site is still open for Season 42, so in this Survivor downtime, you could apply. Right now the site says Season 42 production is planned for sometime between May and July 2020. That could always change depending on the state of the world in these next few weeks and months.

Even though Season 41's filming and premiere dates are up in the air, fans do know one aspect that might come into play in the new season. Probst seemed interested in keeping tokens as part of the show going forward after their introduction in Season 40. "In future seasons, who knows? Maybe you're not looking for idols, you're looking for tokens. And with tokens, you buy whatever you need. That's the big idea," Probst said about the gameplay change in another EW article.

Perhaps as fans wait for news, Probst will give more hints about upcoming changes or additions to the new season. At least then fans will have something to discuss in advance of the September premiere possibly being delayed.

More like this
Everything To Know About A Potential 'Bling Empire: New York' Season 2
By Gretchen Smail
Everything To Know About 'Selling The OC' Season 2
By Brad Witter
This 'Bachelor' Contestant Had The Best Reaction To Wearing The Same Dress As Another Woman
By Grace Wehniainen
10 Photos Of The Wildest Limo Arrivals From 'The Bachelor' Premiere
By Brad Witter
Get Even More From Bustle — Sign Up For The Newsletter
From hair trends to relationship advice, our daily newsletter has everything you need to sound like a person who’s on TikTok, even if you aren’t.