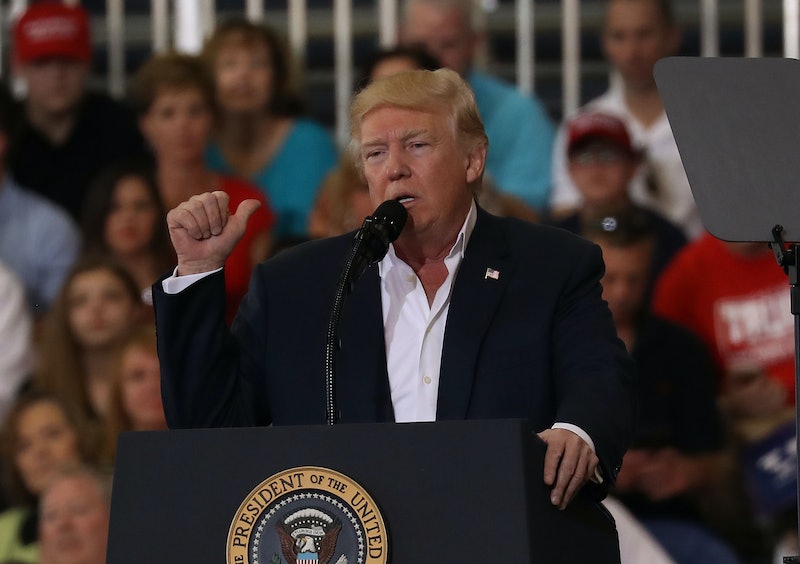 In an age in which the President of the United States continually pushes false information, we're at an interesting time, when calling out his inaccuracies is a necessity. Luckily, this week, Sweden's Twitter account is fact-checking President Donald Trump, especially when it comes to his claims about the country.

On Saturday, Trump caused a lot of confusion when he talked about a "major incident" in Sweden from the night before. He was going off about immigration once again, referencing terrorist attacks in foreign countries, when he mentioned the Scandanavian country. However, representatives from Sweden didn't know what Trump was talking about.

Later, Trump took to Twitter to explain that he had heard about Sweden on Fox News. Eventually it was deducted that he had watched Tucker Carlson interview filmmaker Ami Horowitz, who claimed that authorities in Sweden are trying to cover up a crime wave caused by refugees.

Now Sweden's Twitter account is taking Trump to task for his comments about Sweden, immigration, and other topics. You see, Sweden has a really cool system for running their social media, whereby each week a different citizen gets to take over the account. This week, our trusty adviser on all things Sweden is Max Karlsson, a 22-year-old who mentions in his bio that he is a "huge nerd" who "likes facts."

On Monday, his first day at the helm, he decided to go through how the claims about Sweden's crime were incorrect.

Using actual data to back up his claims, Max explained why the acceptance of refugees in Sweden has not resulted in an increase in crime.

In fact, it seems that Sweden is actually doing pretty well, with a lower unemployment rate and a richer populace overall.

A lot of people consider Sweden a great country to live in, possibly the best, for many reasons.

Max's next thread of facts spoke directly to Trump's past comments about immigrants and the false dangers they represent.

And he offered up more proof that immigration has not cause a rise in crime in Sweden.

He explained that immigration benefits everyone in a country.

And highlighted the right's negative connotation of "migrant."

Max will be at the helm for the rest of the week, so it might be a good idea to stay tuned to see what he has to say about Trump in the next few days.

It's a very scary reality that our president is currently repeating what he hears a guest claim on Fox News without vetting the accuracy behind it. Trump does have a large audience in the American people, and some of them are willing to outright trust what he says. That's why it's essential that the rest of us call him out on things like this, and explain why he can't just repeat talking points without evidence. Especially when it comes to immigration, real people's lives are at stake.

It's heartening to hear that Swedes care about facts and truth, and are willing to take up the task of holding Trump accountable for what he says.