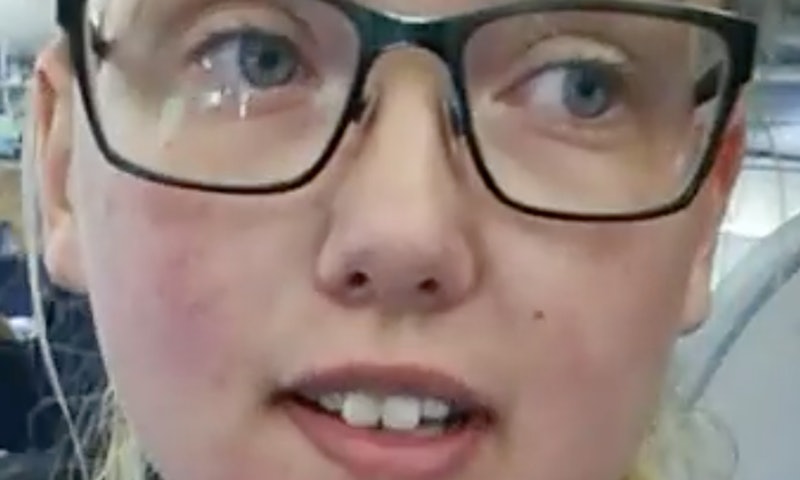 In July, 21-year-old Elin Ersson single-handedly prevented a flight from taking off in order to stop the deportation of an Afghan asylum-seeker. After boarding an aircraft at the Landvetter airport in Gothenburg, Sweden, Ersson refused to sit down, thereby ensuring that the plane couldn't take off. The Afghan asylum-seeker was ultimately taken off the flight, as Ersson wanted. Now, the Swedish student and asylum activist is facing prosecution “for crimes against the aviation law," The Guardian reported.

Ersson broadcast her protest live on Facebook, where it has since garnered millions of views. She initially boarded the plane with the photo of a young Afghan man whose deportation she was trying to prevent, but after realizing that he was not on board, she continued her protest to help a different Afghan asylum-seeker who was also facing deportation. After learning that the asylum-seeker had a criminal record, Ersson argued that this did not justify deportation, though both men Ersson tried to help were ultimately deported at a later time.

“I did it as an individual, activist and fellow human being,” she told Swedish media, per The Guardian. “My point of departure is that he is human and deserves to live. In Sweden we do not have the death penalty, but deportation to a country at war can mean death. If someone has committed a crime, they may be jailed and serve their sentence in Sweden.”

Although Ersson has maintained that she is not guilty of any crimes, Swedish prosecutors reportedly said that her refusal to sit down was not in compliance with requests from the flight captain and cabin crew. Prosecutors have also argued that Ersson's actions were in violation of Swedish aviation law. As a result, Ersson could face a fine and up to six months in jail if she is convicted.

Although Ersson is facing prosecution in Sweden, people all over the world praised her for standing her ground to defend the asylum-seeker. As The Independent reported back in July, this was not so much the case on the plane; although some people on the flight came forward to support her protest, others accused her of causing delays. Ersson insisted, however, that protesting was her right under Swedish law — though Swedish authorities have argued that disobeying the captain was not.

The Independent pointed out that Ersson's protest — in addition to delaying an asylum-seeker's deportation — also shed light on Sweden's increasingly strict policies on asylum-seekers. According to The New Yorker, Sweden used to have some of the most open borders in Europe, and it brought in some of the highest number of Syrian refugees per capita. But in the past few years, Sweden has deported many people and reduced the number of new immigrants it has allowed into the country. This rapid tightening of immigration policy can, in part, be attributed to the rise in popularity of a right-wing party, the Sweden Democrats, who have dedicated much of their platform to restricting immigration.

These immigration restrictions, coupled with Sweden's aviation laws, have led to the decision to prosecute Ersson. However, a date has not yet been set for her trial, The Guardian reported.

More like this
Taylor Swift, Kerry Washington & More Speak Out On Uvalde Mass Shooting
By Jake Viswanath
How To Support Gun Control Reform Right Now
By Morgan Brinlee and Carolyn Steber
Twitter Was Saying The Same Thing About Sam Ryder’s Surprising Eurovision Result
By El Hunt
Photos Of Boris Johnson Drinking At A Downing Street Lockdown Party Have Surfaced
By Bustle UK
Get Even More From Bustle — Sign Up For The Newsletter