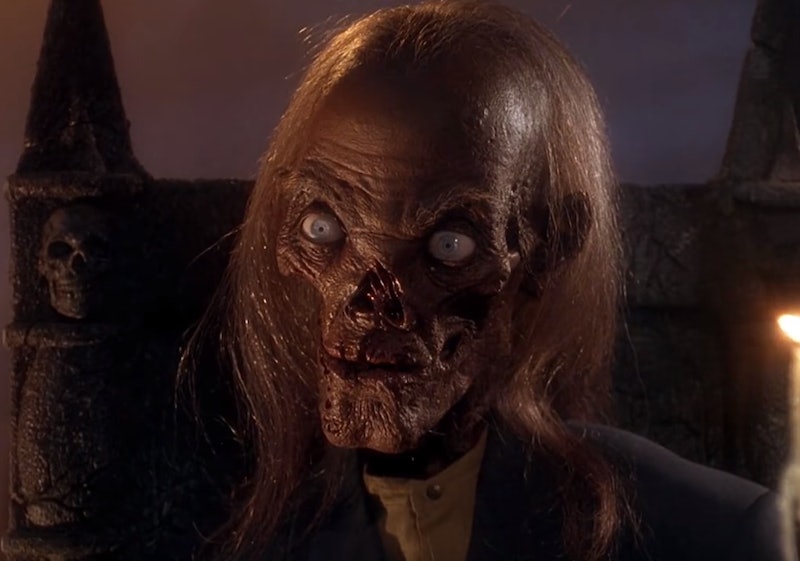 Sorry, horror fans, but according to Deadline, Tales From the Crypt won't be returning to TV after all. The reboot was supposed to arrive sometime in 2017 on TNT to remind '90s kids everywhere why the Crypt Keeper still haunts their nightmares. There was even a short teaser released, so why isn't the Tales From the Crypt reboot happening? It all comes down to the show's complex rights issues. TNT president Keven Reilly told Deadline,

"That one got really caught up in a complete legal mess unfortunately with a very complicated underlying rights structure. We lost so much time, so I said, 'Look, I’m not waiting around four years for this thing.'"

It's a bummer that rights issues will be keeping the Crypt Keeper in his coffin, especially since the proposed reboot was supposed to be part of a horror block curated by M. Night Shyamalan. The horror auteur's career is in the midst of a bit of renaissance thanks to The Visit and Split. Now would have been the perfect time to see what kind of tales he could weave for an anthology series as endlessly adaptable as Tales From the Crypt. Thankfully, Shyamalan has the recently announced Unbreakable sequel to keep him busy, and TNT is still planning to serve up some genre goodness, despite having to shelve their reboot plans.

TNT will now be teaming with Ridley Scott for a sci-fi block instead. Deadline reported the Alien director will collaborate with the cable channel to design a block devoted to "hour-long series, short-form programs and other formats." The channel is also working on a mystery block, and they aren't ruling out taking another stab at creating a horror lineup in the future. In the interview, Reilly said, "I haven’t ruled it out. We don’t have a specific property today but we’re open to it."

While hearing the Crypt Keeper's icon cackle again would have been a treat for fans of the original, it might be better for him to be left in the past for now. The reboot, which Screen Crush noted would have used stories generated by the Wattpad community for inspiration, sounds like it had potential, but a sci-fi block could end up being a daring move for TNT. And now Shyamalan can focus his energy on making the Unbreakable sequel as inventive as its predecessor.

Maybe one day the legal issues surrounding the franchise will be sorted out, but for now, you'll just have to turn to YouTube clips for all of your Tales From the Crypt needs.