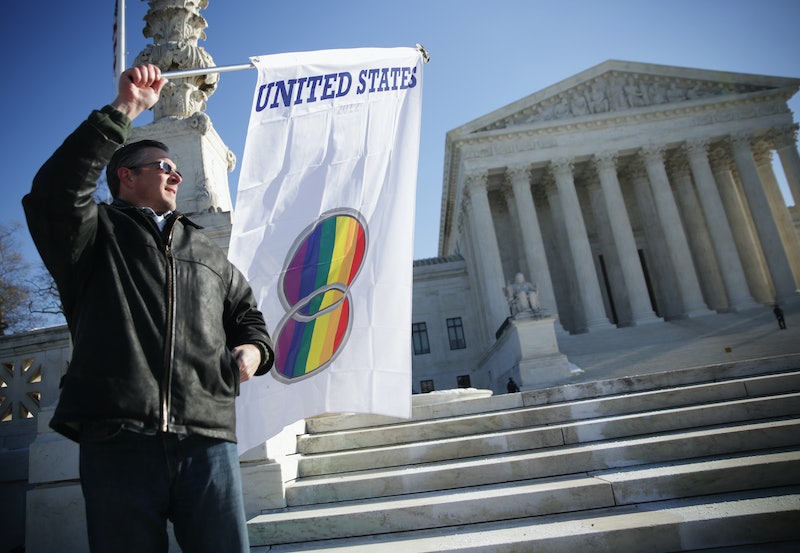 The Natural Marriage Defense Act states that the Supreme Court's landmark decision in 2015 to legalize marriage equality is “unauthoritative, void, and of no effect." The bill also states that marriage clerks are expected to deny any marriage license applications that would "enable the applicants to enter into an unlawful and invalid marriage" — "unlawful" in this case referring to any marriage that is not between a man and woman.

The proposed Tennessee Natural Marriage Defense Act would not just attempt to undo marriage equality. According to The Tennessean, the bill — if it passed — would require the state's attorney general to defend Tennessee's marriage laws in any future court challenges, and would protect marriage clerks from arrest if they deny marriage licenses to same-sex couples.

The Tennessean also projects that the state could become embroiled in a lengthy legal battle if this bill were to pass. The Natural Marriage Defense Act would likely face an immediate court challenge, and a federal district court could rule that the legislation cannot be enforced. However, given that the bill calls on Tennessee's attorney general to defend this legislation, the case could advance to the 6th Circuit Federal Appeals Court — and potentially even the Supreme Court.

According to The Advocate, Tennessee's Natural Marriage Defense Act was first introduced in 2016 by Republican Rep. Mark Pody and Republican Sen. Mae Beavers. After Pody and Beavers put forth this legislation, however, it was quickly killed by the Tennessee House Civil Justice subcommittee after it became clear that the state could lose up to $8.5 billion in federal funding by passing it. After all, this bill would ignore federal law — codified by the Supreme Court's Obergefell v. Hodges ruling — and could result in the federal government cutting funding for many of Tennessee's programs.

Although the bill has failed in the past, Pody appears reluctant to give up on it. According to HuffPost, Pody said back in 2015 that he felt God had called on him to stop same-sex marriages.

According to ThinkProgress, Tennessee is not the only state that has started off the year by proposing legislation targeting LGBTQ people. Anti-LGBTQ bills have also been introduced in Mississippi, Utah, Indiana, and South Dakota, per ThinkProgress.