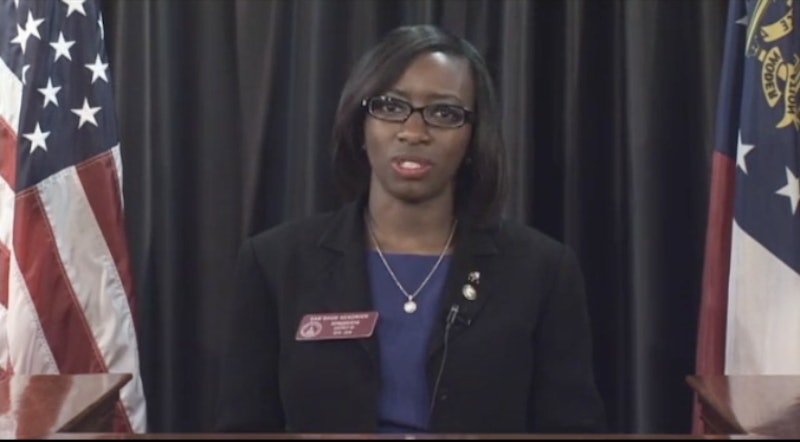 In a move to protest an anti-abortion bill that her Republican colleagues in the Georgia state House passed last week, state Rep. Dar'shun Kendrick unveiled her "testicular bill of rights" on Monday. "Ggggooooodddd morning!" Kendrick tweeted. "Introducing my 'testicular bill of rights' legislative package. You want some regulation of bodies and choice? Done!"

Although the bill hasn't been introduced yet, Kendrick plans to draft it by the end of the week, according to The Washington Post. According to her tweet, Kendrick's bill would cover five major points: require men to get their sexual partner's permission to be prescribed for Viagra or "any erectile dysfunction medication"; ban vasectomies in Georgia; categorize sex without a condom as "aggravated assault"; require DNA testing when a woman is eight weeks into her pregnancy, and upon confirmation of paternity, have the man pay child support "immediately"; and institute a 24-hour waiting period on men seeking to purchase sex toys or pornography.

And Kendrick isn't joking about any of this. "I’m dead serious," Kendrick told The Rolling Stone on Monday. She added that the purpose of her bill was to "bring awareness to the fact that if you’re going to legislate our bodies, then we have every right to propose legislation to regulate yours."

In Georgia, abortion is legal up to 20 weeks of a woman's pregnancy. But HB 481, the Living Infants Fairness and Equality Act that was passed by the Georgia state House, would ban a woman from having an abortion as soon as a fetal "heartbeat" is detected, which can be as early as six weeks. (Many women do not know they are pregnant until four or seven weeks into their pregnancy.) The bill does would not allow abortions even in the case of rape or incest.

Under such strict parameters, critics like Kendrick believe that the bill essentially outlaws abortion for women. In Newsweek on Tuesday, Kendrick wrote about her "testicular bill of rights," and called HB 481 the "Women's Womb Takeover" bill.

In her op-ed, Kendrick was unapologetically straightforward about the purpose of her bill. "To show the absurdity when a woman tries to regulate a man’s body like HB 481 and other anti-choice bills are doing in regulating women’s bodies," she wrote.

The Georgia state legislator also told The Rolling Stone that HB 481 was a "test case." It carried broad implications for women across the country, according to Kendrick, not just women in the Peach State. If HB 481 passes the Georgia state Senate and is signed into law by Gov. Brian Kemp, it could become of the most restrictive laws on abortion access in the country.

"It is a case to test Roe v. Wade. They’re hoping that it gets up to the Court of Appeals — the 11th Circuit is one of the most conservative court circuits that we have, and they’re hopeful that they will uphold part of it, and then they’ll take it all the way to the Supreme Court," she told The Rolling Stone. "They know exactly what they are doing. This is intentional."