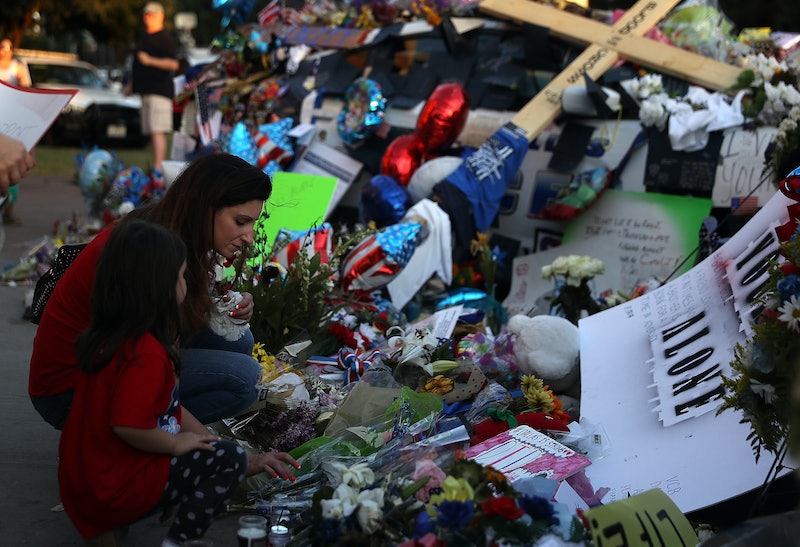 Crystal Holcombe was eight months pregnant when she died in the Sutherland Springs, Texas, church shooting. The 36-year-old, three of her children, her mother-in-law, father-in-law, brother-in-law, and niece are all among the 26 victims who lost their lives on Nov. 5. Due to state law, Holcombe's unborn child is considered the Texas shooting's youngest victim.

The suspect in Sunday's mass shooting died of a self-inflicted gunshot wound while fleeing the scene. Had he lived, he would have been charged with the murder of 26 people — including the fetus killed in utero. Texas' fetal homicide law defines "ending the life of an embryo or fetus at any stage of development" as murder, meaning anyone who kills a pregnant woman in the state would also be charged for murdering her fetus.

Fetal homicide laws (also known as "feticide" laws) aim to raise the penalties for violent crimes against pregnant women, but like most U.S. laws surrounding pregnancy, they're a contentious subject. At least 38 states have some fetal homicide measure on the books, 23 of which apply to the early stages of pregnancy. While some seek to punish violent offenders for additional harm caused to a victim when a pregnancy is lost — and specify that the law isn't applicable to legal abortions — others focus on protecting the life of a fetus. The latter is where pro-choice advocates take issue with fetal homicide measures.

Texas' law passed in 2004 after years of debate. The main catalyst was the murder of Laci Peterson, who was eight months pregnant at the time of her death in California. Peterson's husband was convicted on two counts of murder.

In order to penalize killing a fetus, these measures often give fetuses the same rights as living people. Those who believe life begins at conception advocate for fetal "personhood." Many who believe life begins at birth still want to see additional punishment for violent crimes against pregnant women, but fear that "personhood" language in fetal homicide laws could be used to prevent women from obtaining abortions.

Although the ACLU challenged Texas' fetal homicide law, it remains intact. "Permitting legal actions on behalf of stillborn fetuses or enacting laws to protect fetuses opens a Pandora's box in terms of how the law treats pregnancy and childbirth," the ACLU's website says. "However great our compassion and concern for bereaved prospective parents, we must examine such lawsuits and legislation with a critical eye. If they pose a real threat to reproductive rights, as they often do, then we must intervene and oppose them."

The case of Purvi Patel shows how fetal homicide laws can be used to punish women. Patel was convicted of feticide and neglect of a dependent in Indiana in 2015, and subsequently sentenced to 20 years in prison for illegally self-inducing an abortion. Prosecutors used Indiana's fetal homicide law, intended to further punish those who kill pregnant women, to convict Patel for ending her pregnancy.

At the time, NARAL Pro-Choice America wrote in a Facebook post: "Prosecuting women for their pregnancy outcomes is a dangerous and growing trend. Women whose pregnancy ends in abortion or miscarriage shouldn't have to fear legal consequences."

Patel's feticide conviction was overturned, and she was released from jail in 2016. Nevertheless, her case exemplifies how far-reaching the concept of fetal "personhood" can be.

In the case of the Texas shooting, the fetal homicide law won't have an impact beyond increasing the official death toll, since the deceased suspect won't have his day in court. And Holcombe, along with her unborn child, will be remembered among the more than two dozen people who died at the rural First Baptist Church at the hands of a lone gunman who can't be held accountable for their deaths.