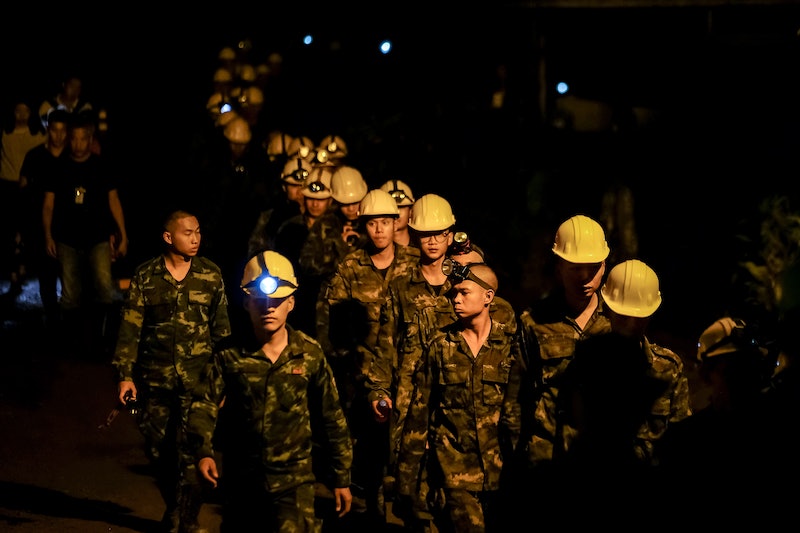 For nine days, twelve Thai boys and their soccer coach have been stuck in an underwater cave in northern Thailand. One person has already died trying to rescue them, and oxygen levels in the cave are falling to dangerous levels. As authorities weigh several imperfect options for extracting the boys and their coach, here's everything we know about the Thai soccer team trapped in a cave.

The team of 11-16 year olds first went missing on June 23rd when, after a soccer match, they went to explore the Tham Luang Cave with their coach. Although they had reportedly been to that cave before, they decided to explore the cave further this time so they could write their names on the wall, the Wall Street Journal reported. However, it started raining heavily after they entered, causing water levels to rise rapidly and flood the path they entered through.

An international effort to save the boys quickly materialized, with rescuers from the United States, Great Britain, Australia, Japan, Myanmar, China and Laos all coming to Thailand to help local officials locate the team. Thai Navy SEALS have been spearheading the effort, according to TIME, and U.S. Air Force has sent 17 members to help with the mission.

On July 2nd, divers from the British Cave Rescue Council finally located the team, and all of them were alive and safe. But although the Thai boys and their coach have been given food and supplies, they're still in danger — from falling oxygen levels, impending monsoons and the absence of any fool-proof plan to get them out of the cave.

Officials are now considering four approaches to rescuing the boys, according to Vox: Pumping water out of the cave's passageways to let the team leave the way it came in, drilling into the surrounding rock and pulling them out, teaching the team to scuba dive so they can swim out themselves, or having them wait in the cave for the next several months until monsoon season passes and the water drains from the cave naturally.

The first approach is already underway. A rescue official with Thailand’s interior ministry told the Guardian on Thursday that specialists have drained 40 percent of the cave's water, partially clearing the 2.5-mile path the boys would need to trek in order to leave the cave. But draining the water could well be a Sisyphean effort: More heavy rain is expected on Saturday, according to the Guardian, which will re-flood the tunnels surrounding the cave.

Drilling into the cave from above might seem like a fairly straightforward way to extract the boys. But it's a logistical nightmare: The cave is underneath a mountain that's covered in heavy forests, with few to no suitable roadways for transporting drilling equipment, and the Guardian reported Friday that authorities have been unable to find a suitable drilling location.

However, Elon Musk announced Friday that he's sending engineers from two of his firms, SpaceX and the Boring Company, to assess whether or not a drilling solution is still viable. Musk also suggested that air could be pumped into the cave from the outside, inflating the cave "like a bouncy castle" and creating an air tunnel that would "auto-conform to odd shapes" in the cave's various passageways.

Teaching the soccer team to scuba dive, or having the team traverse the flooded tunnels themselves through other means, is a tall order: The boys and their coach are not in good physical shape, as they went without food for 10 days and are breathing diminished levels of oxygen (more on that below). Furthermore, some of them don't know how to swim, according to CNN.

"Cave diving is incredibly dangerous for people who are very experienced doing it," Anmar Mirza of the U.S. National Cave Rescue Commission told CNN. "And now you're looking at taking people who have no experience or very little experience with diving, and putting them into a complete blackout situation, where they have to rely on a regulator and the tanks with them to breathe." Thai diver Songkran Yodpunkham told CNN that the physical and psychological stress the children have been under could make them panic or hyperventilate during their escape, using up precious oxygen.

The last option — having the children and coach wait in the cave until monsoon season ends in October — is risky as well. If the coming months of rainfall are heavy enough, the chamber they're in could flood completely, drowning them. Furthermore, oxygen levels have fallen to 15 percent in the cave, authorities say, which has likely already impaired the team's cognitive abilities and motor functioning (Normal, breathable air has an oxygenation level of around 21 percent). Authorities are attempting to insert an oxygen tube into the cave, but this resulted in the mission's first fatality when a former Navy SEAL ran out of air while attempting to run the line through to the cave.

Time is running out for the Thai boys and their coach. But all hope isn't lost: ABC News reported late Friday that the Royal Thai Navy, in cooperation with officials from the U.S. and several other countries, may launch a "buddy dive" rescue effort, wherein each of the boys is escorted out one-by-one by an experienced diver, as soon as this weekend.

"When we found the boys, we thought that the boys would be able to survive in there for a long time," Thai Navy SEAL Commander Arpakorn Yookongkaew said at a press conference. "But now, things have changed. We have limited time. We have to work hard."