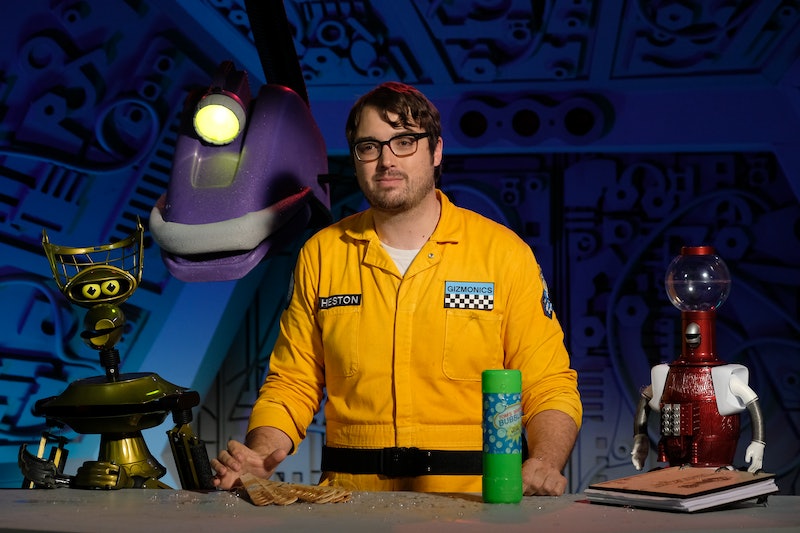 Most television shows have one theme song throughout their run, and it becomes their calling card. If it has lyrics, those lyrics become as crucial to the series as its characters and setting. Mystery Science Theater 3000 has a theme song, but that one song has gone through many different variations, changing along with the show. The new Netflix series Mystery Science Theater 3000: The Return will open with a brand new version of the theme song, listing all the new characters and recapping the new backstory. The new MST3K theme song will have the honor of joining a lineage of some of the most fun, oddball themes in television history.

The theme song, titled "Love Theme From Mystery Science Theater 3000," was originally written by the show's first host, Joel Hodgson, and the first actor to play Tom Servo, Josh Weinstein. The theme song remained the same for the first five seasons, but changed when Hodgson was replaced with new host Mike Nelson. From that point on, the theme song's lyrics shift whenever the cast undergoes a major change — and this reboot is undoubtedly the biggest change yet. Here's a look back at some of the MST3K intro songs that have come before, which could give some clues as to what fans can expect from the new theme.

The original theme song for the nationally-aired version of MST3K lays out the basic plot that would define the rest of the series: an Average Joe type gets imprisoned on spaceship by an evil scientist to watch cheesy movies. He builds robot friends to stay sane. The four versions that would follow as the years go on would keep the basics intact, but switch out a few details here and there, such as Joel being replaced with Mike or the departures of Dr. Forrester and TV's Frank, plus the arrival of Pearl.

Despite changing details, a few things stay constant in all versions of the theme song. In each theme song, the villainous person or team behind Joel or Mike's imprisonment sing:

He'll have to sit and watch them all

And we'll monitor his mind (la-la-la)"

Also a constant is the "Robot Roll Call" portion of the theme song, where the series' cast of robot friends are introduced. Although the robots themselves never change, the quick ad-libs they blurt out after being introduced change from season to season.

The final constant in each iteration of the theme song is possibly the most important part. Any fans of science fiction knows that any story can put itself into a trap once people start asking questions about real science. So, to beat nitpickers to the punch, MST3K always ends its theme with:

"If you're wondering how he eats and breathes

and other science facts

Then repeat to yourself, 'It's just a show

I should really just relax

The entire hang-out vibe of the show is communicated in that final verse, which announces that the show will not take itself seriously and neither should you.

While the new TV theme will definitely change up some lyrics, fans can safely expect to hear standard elements like the Robot Roll Call and final disclaimer. However, if Mystery Science Theater 3000: The Return doesn't stay true to the original theme and goes in a completely new direction, those same fans may do well to take the original song's advice: it is just a TV show and they should really just relax.