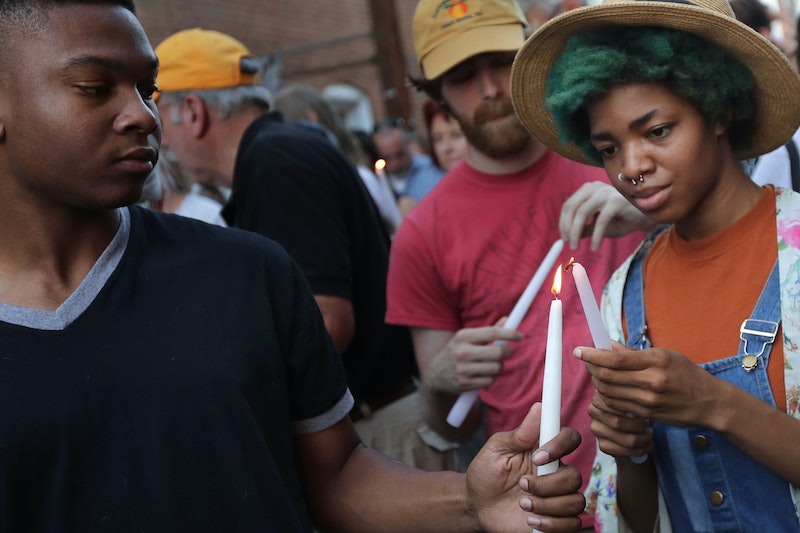 After a far-right white supremacist rally became deadly in Charlottesville, Virginia, many people have wondered how they can stand up to such craven bigotry and ignorance parading out in the open. To bring Americans together, someone on the Internet created a Google document on helping Charlottesville that teaches people how they can help minorities and marginalized communities in distress.

At the moment, the author of the document is unknown, but users on Twitter have been sharing the resource as a way to help people of color in Charlottesville. The white supremacist march that took place on Saturday resulted in the deaths of three people, according to authorities. A woman named Heather Heyer was killed after a man drove his car into a gathering of anti-racist protestors, and two state troopers lost their lives in a helicopter crash near Charlottesville.

Issue literacy has become an incredibly helpful method of teaching people more about race, gender, class, and other political subjects in the oft-volatile context of the United States of America.

After the protests in Ferguson, educational resources on unrest after police brutality and a curriculum on Black Lives Matter became a popular way to acquaint eager readers online who wanted to learn more about how they could contribute to progressive causes as citizens.

So far, the document includes 24 points for its readers. The first and primary point in the document points to the reason for the current tension in Charlottesville: the demand for the removal of the statue of the confederate leader Robert E. Lee.

But the document doesn't limit itself to the regional context of Charlottesville. It goes beyond and touches on racial tension in other areas, like a demand to rename the Justin Herman Plaza in San Francisco. Herman was notorious for running a development plan that displaced African Americans and Japanese Americans from the Western Addition, Fillmore, and Chinatown districts of the city.

Beyond protesting historically controversial monuments and demanding to rename public places for people who didn't actively work to dehumanize people of color, the document also points to future protests and counter-protests, such as a "White Lives Matter" rally that apparently will take place in Texas in early September.

In addition to providing articles that shed light on the Unite The Right rally that came to be, the document also points to how you can donate to Charlottesville-based anti-racist collectives, add to medical funds for injured progressive activists, and join organizations in your very own cities. There are also guidelines on how one's voice can be used to amplify socially-forward causes on social media. But perhaps the most illuminating aspect of the document is its visual guide on explaining abstract (but all-too-real) things like privilege to its readers.

Documents like this one on Charlottesville show how digital media and progressive politics combined can create great free resources for interested readers who want to help those living on the periphery of society. In a political climate like ours where white supremacy is openly parading in the streets, educational content like this is needed more than ever.